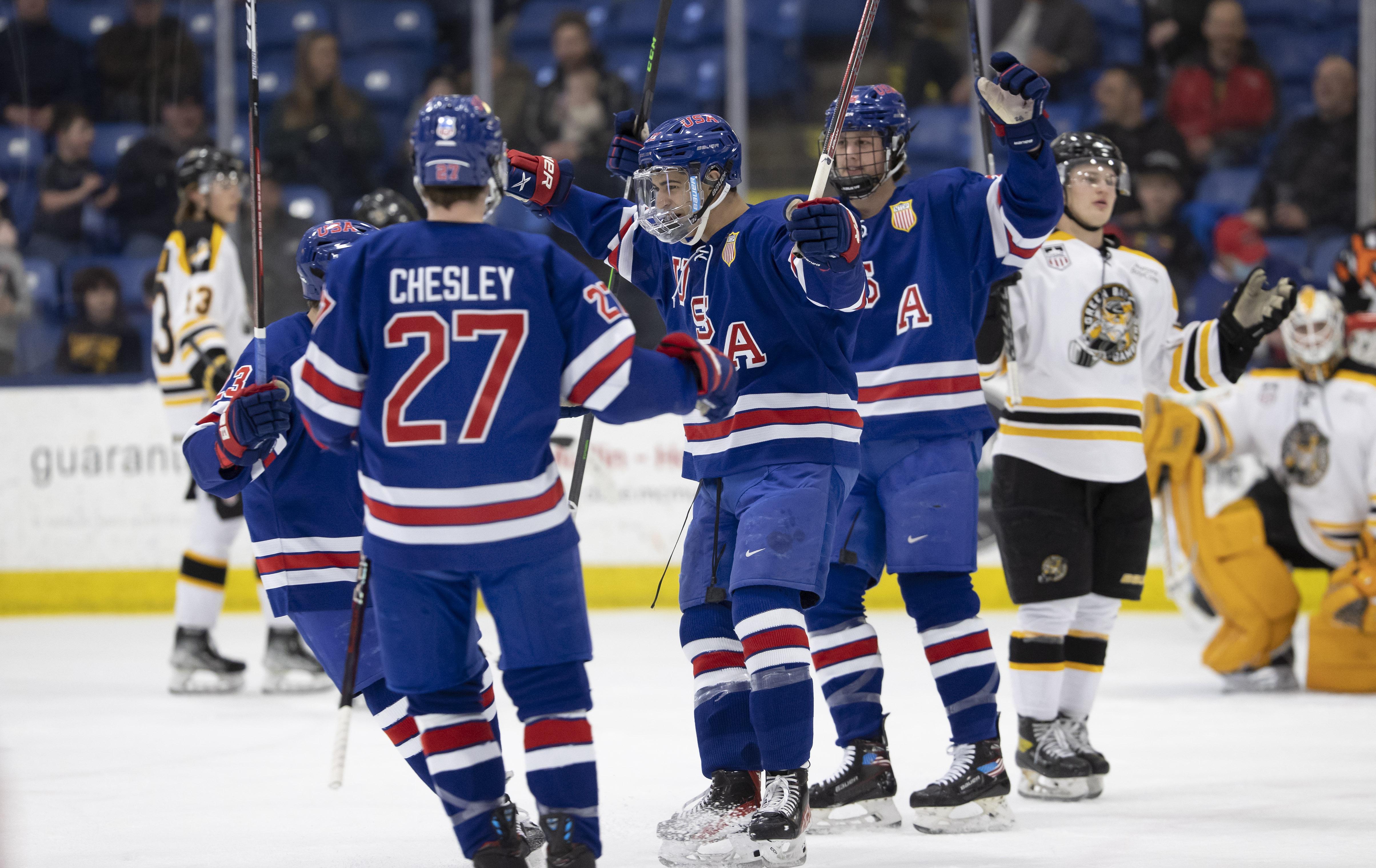 Smith started the scoring parade at 7:35 of the opening frame when he picked up a rebound off a Frank Nazar (Mount Clemens, Mich.) shot and put it in the back of the net. Howard collected a secondary helper for his first point of the night.

Less than a minute later, defenseman Lane Hutson (North Barrington, Ill.) forced a Gamblers defensive-zone turnover and slid a cross-crease pass to Devin Kaplan (Bridgewater, N.J.) on the right wing. The power forward returned the puck to Hutson, who tapped in for his sixth goal of the season.

Smith used an individual effort to pick up his second score of the evening. After an errant Green Bay pass, the Boston College commit was first to the puck, skated down the right wing and netted his wrister from the right circle for a 3-0 lead.

Kaplan put his name in the goal column when he redirected a Hutson shot in front of the net for his eighth of the season at 12:04 of the first.

Forty seconds later, Chesley took a pass from Howard at the right point and skated in unabated to the goaltender. He wound up for a booming slap shot that produced his fourth goal of the campaign and a 5-0 advantage.

Gauthier added the game's next pair of goals in a 4:24 span. The first came on a back-door tap-in off a pretty set-up from Logan Cooley (Pittsburgh, Pa.). Gauthier followed with his NTDP-leading 26th of the year with a quick shot from the right circle off a feed from Jimmy Snuggerud (Chaska, Minn.).

Howard, the U18s' leading point producer, capped the first-period scoring with a one-timer from the slot off a pass from Nazar, who had skated around the offensive zone and behind the cage prior.

After Green Bay's Brody Lamb but the Gamblers on the board six minutes into the second, Howard connected for his second of the night off a great passing display from the entire line. Nazar made a nice touch-pass for Smith to enter the zone, who went cross-crease to Howard for a one-timer and a 9-1 lead after two periods.

Gamblers forward Ryan Greene fired a shot from the left circle to score a power-play marker less than four minutes into the third.

Cooley added a breakaway goal and Chesley netted his second big slapper of the night to give the U18s a season-high 11 goals on the night.

Tyler Muszelik (Long Valley, N.J.) went the distance in net for the U18s to extend his record to 16-4-2 on the year. He finished the night with 18 saves to pick up the win.

The U18s return to the ice next Friday when they return to the final two games of their Kroger College Series, beginning with a tilt against Providence College. Puck drop is slated for 7:00 p.m. ET from Schneider Arena.