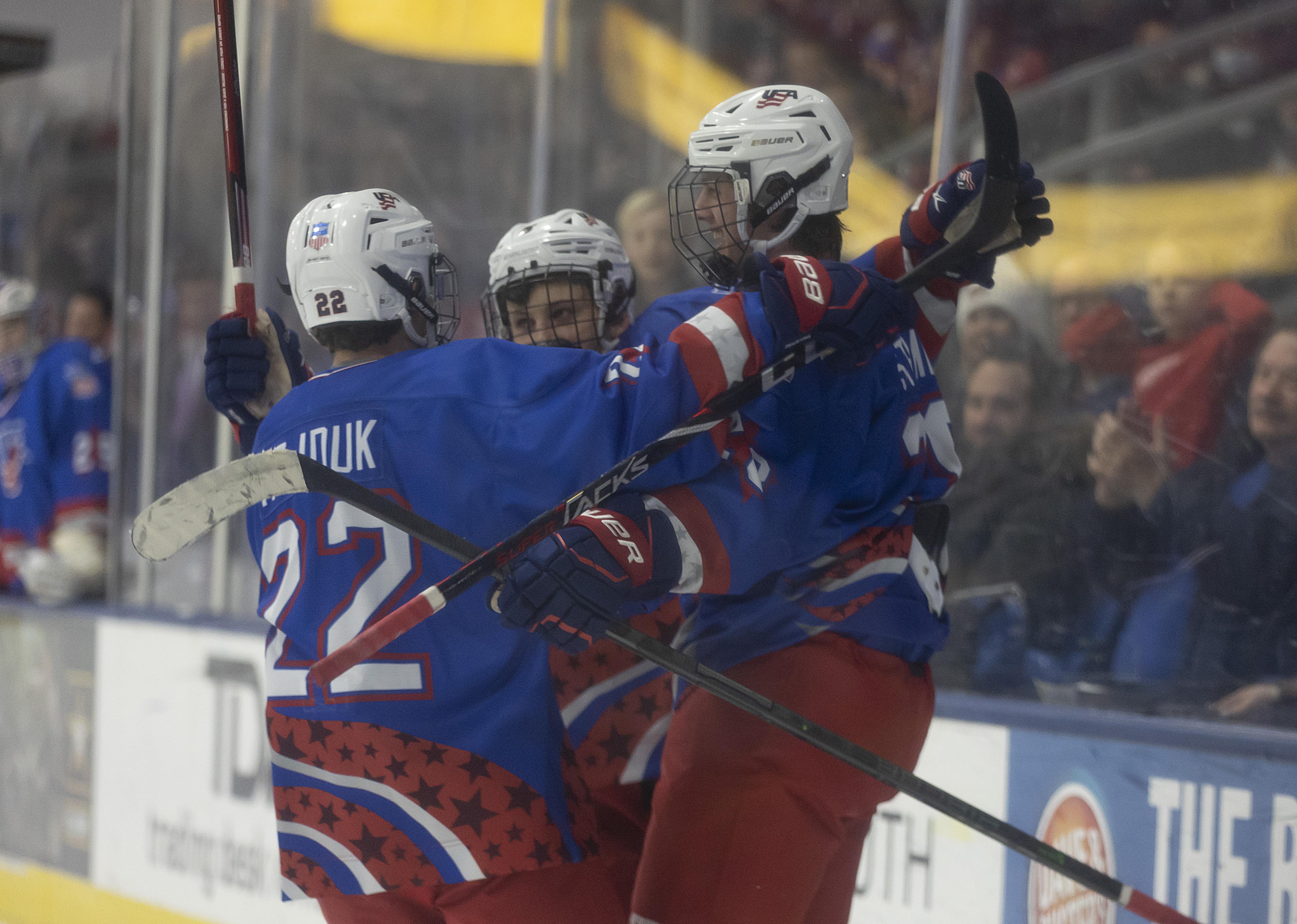 PLYMOUTH, Mich. - Charlie Stramel (Rosemount, Minn.) recorded a hat-trick in a 9:01 span in the second period to lead the U.S. National Under-18 Team to a 9-4 win over the Madison Capitols Saturday evening at USA Hockey Arena.

After an offseason injury that forced him to miss the first half of the season, Stramel netted his first career NTDP hat-trick in just his third game played of the season. He began the feat with a sleek redirection from out front off an original shot from Lane Hutson (North Barrington, Ill.), with additional help from Ryan Chesley (Mahtomedi, Minn.).

Stramel followed with the final two goals of a crazy second period and collected his second at 9:01 of the period, a one-timer from the slot off a set-up from Seamus Casey (Fort Myers, Fla.). Marek Hejduk (Parker, Colo.) took a shot that was cast aside, but Casey picked up the rebound and fed Stramel for the goal.

The 6-foot-3, 215-pound forward completed the hat-trick after he was stopped on his initial shot, but collected a rebound and slid the second chance by Simon Latkoczy. Hunter Brzustewicz (Washington Twp., Mich.) fed Hejduk with a lengthy feed who found Stramel streaking down the left wing. He cut towards the center of the ice, beat the defender and got the second shot to go to give the U18s a 7-2 lead in the second.

To start the scoring in the opening frame, Lane Hutson (North Barrington, Ill.) put Team USA on the board with a slick wrister from the left circle. After Madison fanned on a clearing attempt, the loose puck found Hutson by way of Logan Cooley (Pittsburgh, Pa.) on the left wing. Hutson dragged the puck to reposition the shooting angle and ripped his wrister over the glove of Simon Latkoczy for his fifth score of the year.

U17 call-up Will Smith (Lexington, Mass.) doubled the USA advantage with a shot that deflected off a Caps defender before the end of the opening frame. Frank Nazar (Mount Clemens, Mich.) made a nice play to keep the puck in the zone at the right point and fired a pass to Smith at the goal line. He tried to go back-door to Isaac Howard (Hudson, Wis.) but the Madison defender knocked it in before the puck could get there. Smith's 17th of the season made it a 2-0 game with 2:02 to play.

Luke Mittelstadt put Madison on the board less than 30 seconds into the middle period, but Nazar restored the two-goal lead 24 seconds later with a ridiculous breakaway goal. After deflecting a Capitols attempt in the defensive zone, Nazar was first to the puck and got behind the defense. The University of Michigan commit used a forehand-backhand-top-shelf move for his 16th tally of the year to make it a 3-1 game.

Stramel followed with his first of the night and Howard collected another for Team USA just over a minute later to make it 5-1. In a beautiful tic-tac-toe sequence, Nazar fed Smith who found a cutting Howard for his 16th of the season in front of the Madison cage.

The Capitols managed another score, but Stramel came back with his second and third of the night. Smith made it a pair of goals for himself to give Team USA an 8-2 advantage after 40 minutes. After collecting the puck behind the Madison cage, Smith circled out front, cut down the middle of the ice and used great edgework on the skates to deke the goalie and flip a backhand over the blocker. Nazar and Casey picked up assists on the score.

Rutger McGroarty (Lincoln, Neb.) added a breakaway goal for the U18s in the third period. Jimmy Snuggerud (Chaska, Minn.) and Cooley set up the power forward who snuck in behind the defense and curled his shot in for his 16th tally of the season.

Madison added a power-play goal midway through the third and another late score for the 9-4 final.

Tyler Muszelik (Long Valley, N.J.) went the distance in net and finished with 35 saves to extend his record to 14-4-2 on the season.

The U18s are off next weekend before returning to the ice on Wednesday, Feb. 2, at Yost Ice Arena to take on the University of Michigan Wolverines.