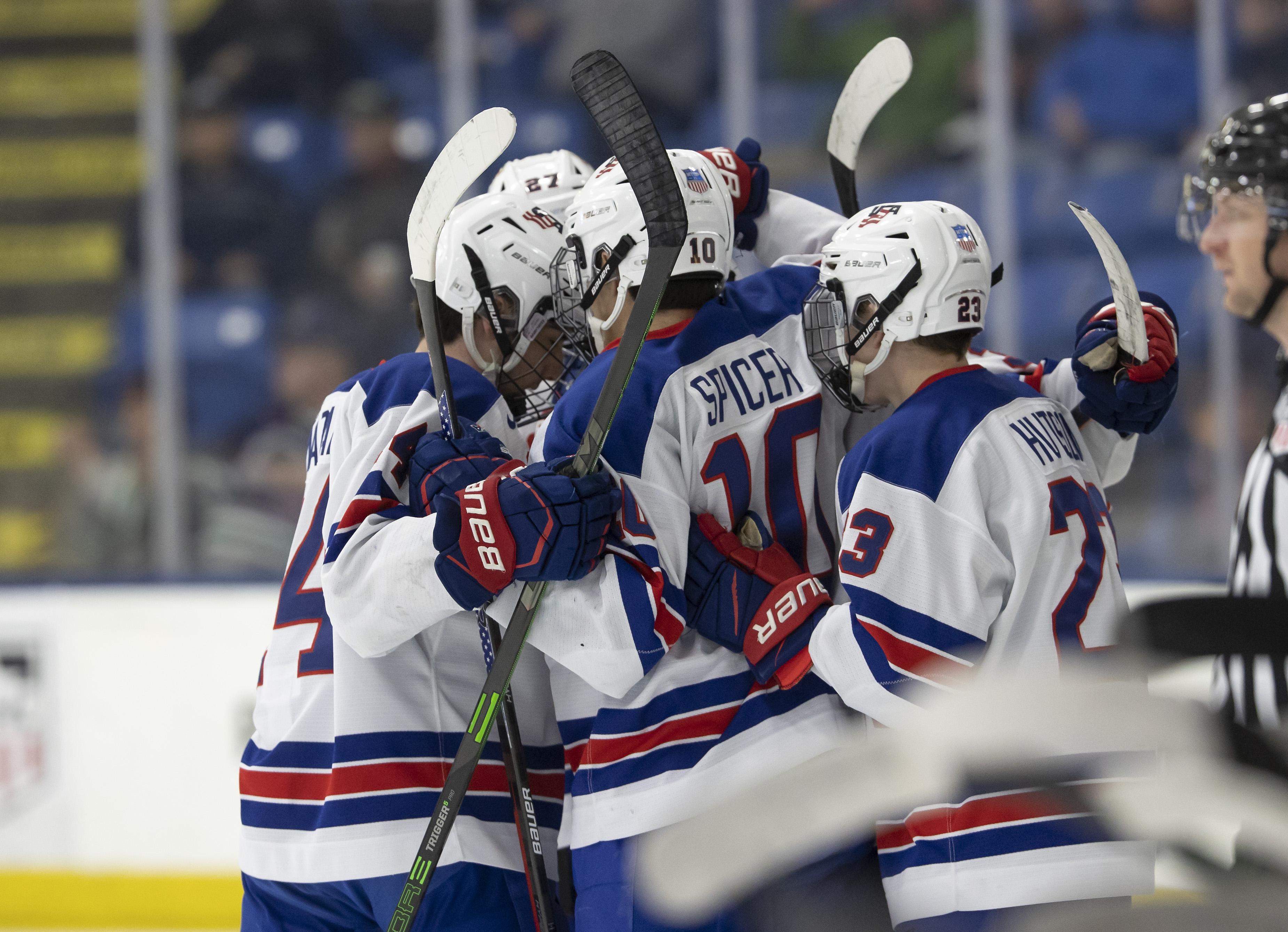 With the trio, Gauthier has netted 10 goals over his last seven games played.

Gauthier opened the scoring less than a minute into the first period. Rutger McGroarty (Lincoln, Neb.) led Team USA on a breakaway down the left wing and Gauthier collected Jimmy Snuggerud's (Chaska, Minn.) rebound and fired in to make it a 1-0 game.

Isaac Howard (Hudson, Wis.) doubled the lead on the power play at 12:58 with his 13th goal of the season. Frank Nazar (Mount Clemens, Mich.) won an offensive-zone draw back to Lane Hutson (North Barrington, Ill.), who fed Howard at the right circle. The 5-foot-10 forward fired the puck through net-front traffic to make it 2-0 in favor of Team USA.

Gauthier collected his second marker of the period when he capitalized on a rebound opportunity at 5:29.  Tyler Duke (Strongsville, Ohio) took a pass from Will Smith (Lexington, Mass.) and his slap-shot bounced high in the slot, where Gauthier collected and buried the second chance to extend the lead.

With 4:21 left to play in the first, Ryan Leonard (Amherst, Mass.) made it four in a row for the home team. Charlie Leddy (Fairfield, Conn.) pinched along the right-wing boards to keep the puck in the offensive zone. McGroarty found it and passed the puck to Leonard, who sailed his shot into the top corner of the net.

Snuggerud scored the lone goal of the second period at 14:26 to give the University of Minnesota commit a multi-point night. After he circled the offensive zone, Snuggerud left the puck for Gauthier at the right point. He drove the net and delivered a cross-crease pass back to Snuggerud, who fired a wrist shot into the top left corner to bring the score to 5-0.

Gauthier completed the hat trick 36 seconds into the third when he took a pass from Snuggerud, skated the length of the ice and roofed his wrister in the short-side top corner for his team-leading 19th marker of the season. Seamus Casey (Fort Myers, Fla.) dug the puck out of the defensive zone to collect the secondary helper on the team's sixth straight score.

Muszelik ended the night with 12 saves on 13 Auggies shots as he extended his record to 11-4-1 on the season.

The U18s continue their Kroger College Series against the No. 5 University of North Dakota on Saturday afternoon. The New Year's Day puck drop is set for 3:30 p.m. ET at Ralph Engelstad Arena and can be streamed live on NCHC.tv.