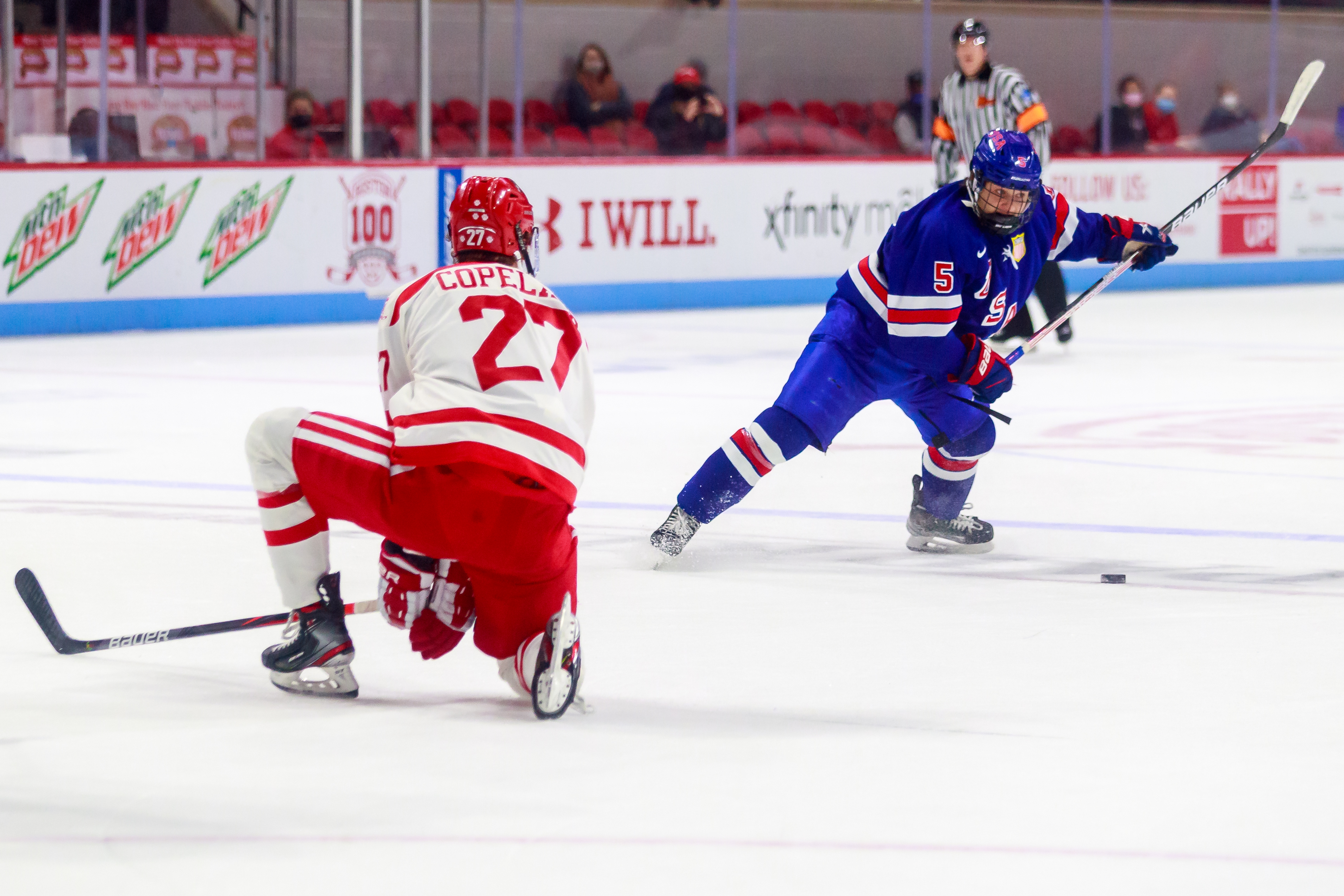 NTDP alum  and current Terriers defenseman Ty Gallagher scored the lone goal of the first period, beating Muszelik with a clean wrist-shot from the point at 16:07 of the opening frame.

Less than two minutes into the middle period, Team USA tied the game off the stick of Rutger McGroarty (Lincoln, Neb.). Charlie Leddy (Fairfield, Conn.) chipped the puck around the boards to Jimmy Snuggerud (Chaska, Minn.) along the right wing. He placed a perfect stretch pass on the stick of McGroarty who ripped a wrister from the top of the left faceoff circle to tie the game.

The U18s took the lead off an incredible shorthanded sequence from Frank Nazar (Mount Clemens, Mich.) and Brady Berard (East Greenwich, R.I.). After losing his stick, Nazar kicked the puck from the defensive to the offensive zone. He raced by the bench, collected a new twig and was first to the puck again. Berard filled the lane for a 2-on-1 and Nazar drew the defender and slid a pass to Berard who put it in for his third score of the season.

Robert Mastrosimone tied the game on a Terriers power play early in the third period with a shot from the right circle.

Team USA's second shorthanded marker of the day pushed them in front again, this one courtesy of Cutter Gauthier (Scottsale, Ariz.). The Boston College commit forced a turnover in the defensive zone, skated the length and in alone and deposited his shot through the five-hole for a 3-2 lead.

Quinn Hutson (North Barrington, Ill.) gave Team USA some breathing room with another goal off a Terriers turnover. His active stick created a deflection and he made a quick wraparound move to extend the lead to 4-2 in his first game with a USA sweater.

That breathing room was needed as Matt Brown scored when BU had an extra attacked with 2:04 to play in regulation.

Muzelik shut the door on the Terriers late in the game and finished with a season-high 38 saves for the U18s. The win gives him double digits on the year as he extended his record to 10-1-1.

The team is back in action tomorrow afternoon as they continue their Kroger College Series with another Hockey East matchup, taking on the Merrimack Warriors. Puck drop is scheduled for 3:00 p.m. at Lawler Rink in North Andover, Massachusetts.