Nazar records a trio of points in U18s win 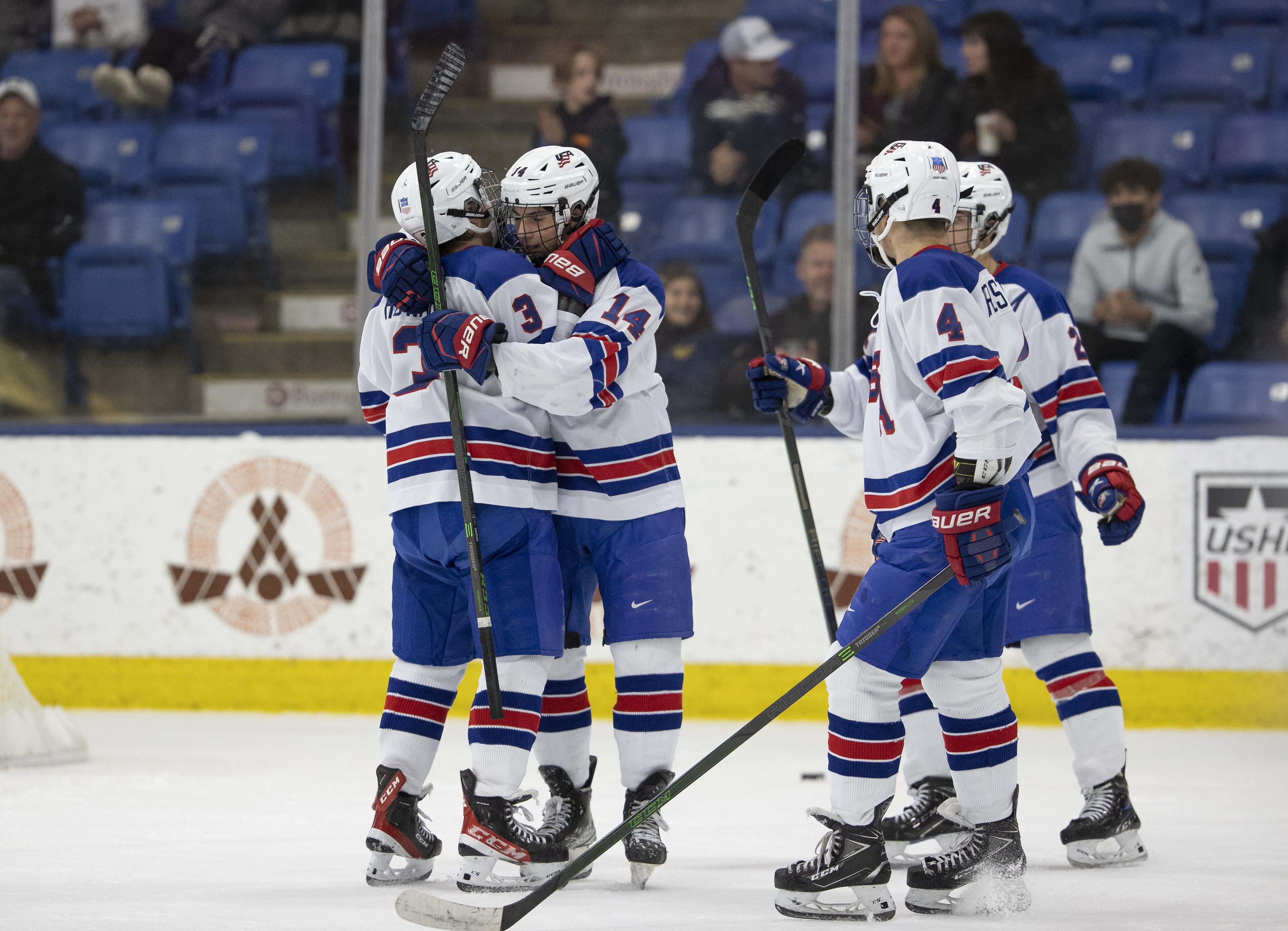 MIDDLETON, Wis. - Seven different skaters scored for the U.S. National Under-18 Team as they skated to a 7-5 victory over the Madison Capitols Saturday evening at Bob Suter's Capitol Ice Arena in Wisconsin.

On Madison's Teddy Bear Toss night, D.J. Hart fired a shot that found that back of the net 3:32 into the game to let the stuffed animals fly out onto the ice.

Oliver Moore (Mounds View, Minn.) made a great play on the forecheck to cause a Madison defense-zone turnover and found Devin Kaplan (Bridgewater, N.J.) with a backhand pass in the slot. Kaplan collected and fired a quick wrister for his fifth goal of the season to tie the game at 1-1.

The U18s took their first lead of the night when Jimmy Snuggerud (Chaska, Minn.) did the work in both the defensive and offensive zones. First, he blocked a Capitols shot attempt, was first to the loose puck and sped behind the Madison defense before depositing his wrister over the blocker of Simon Latkoczy to take a 2-1 lead before the midway mark of the fisrt.

After tallying against the U17s last night, Jake Dunlap added his second in two nights with a quick shot in front of Dylan Silverstein (Calabasas, Calif.) for the game's third tie at 2-2 before the end of the first period.

Will Smith (Lexington, Mass.) restored the lead for Team USA with some quick wrists and a backhand shot off a feed from Frank Nazar III (Mount Clemens, Mich.) early in the third period.

Hart responded with a snap of a shot that went bar-down to once again tie the game at three goals apiece.

A tremendous passing display from the U18s led to another lead courtesy of Nazar at 5:55 of the third. Smith found the puck in the defensive zone and fed Isaac Howard (Hudson, Wis.) down the left wing. Howard led Nazar to a breakaway where the University of Michigan commit finished five-hole for his 11th goal and a 4-3 USA lead.

Cutter Gauthier (Scottsale, Ariz.) faked a one-timer on the power play, steadied the pick and ripped his wrist-shot far-side top corner to give the U18s their first two-goal lead of the night. Seamus Casey (Fort Myers, Fla.) and Snuggerud collected assists on the man advantage goal.

Team USA capped the USA's scoring with a Seamus Powell (Marcellus, N.Y.) marker just over the midway mark of the third period, his first score of the year. From the right wing, Nazar fed the defenseman who dangled and fired to extend to the lead to 6-3.

Madison responded with a pair of power-play goals but Lane Hutson (North Barrington, Ill.) iced the game with a shorthanded empty-netter for the 7-5 final.

Dylan Silverstein (Calabasas, Calif.) manned the net for the U18s as he picked up his fourth straight victory. The BC-commit made 18 saves on the night to extend his record to 7-3-0.

The U18s return to the Kroger College Series next weekend for a pair of afternoon games in Boston. They visit Boston University of Saturday before heading to Merrimack for a Sunday matinee.