Cooley, Nazar and Gauthier all net a pair in team's ninth straight win 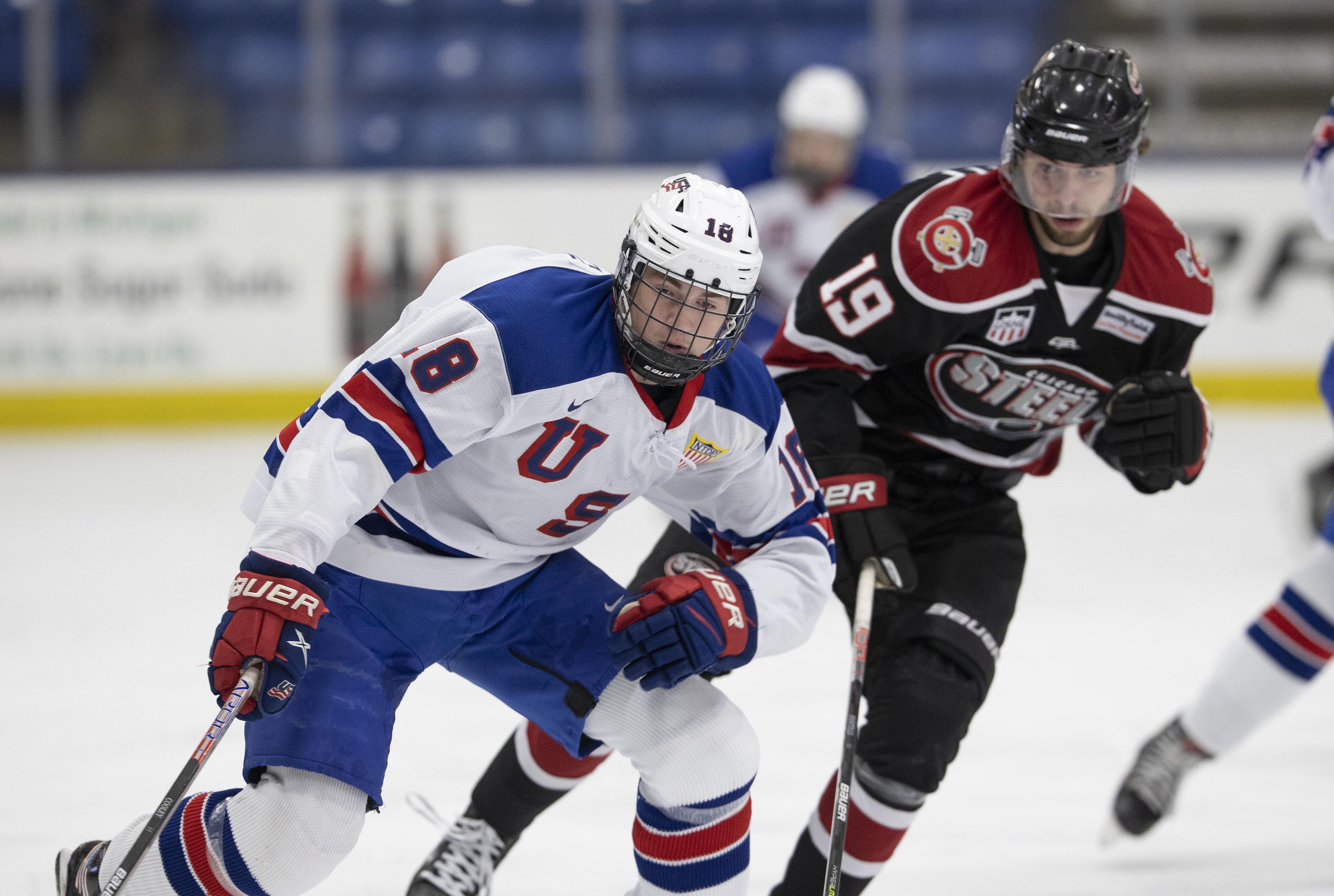 PLYMOUTH, Mich. - The U.S. National Under-18 Team got a pair of goals each from Frank Nazar (Mount Clemens, Mich.), Logan Cooley (Pittsburgh, Pa.) and Cutter Gauthier (Scottsdale, Ariz.) to lead to a 7-5 win over the Chicago Steel Sunday afternoon at USA Hockey Arena.

The U18s raced out of the gate with the first four goals of the afternoon, the first from Nazar at 2:20 of the opening period. Seamus Casey (Fort Myers, Fla.) fed Isaac Howard (Hudson, Wis.) for the first shot, which was denied by Steel goaltender Gibson Homer. The rebound kicked out to Nazar who absorbed a check and backhanded in for his first of the game.

Cooley followed with his first of the night to give the U18s two goals on their first four shots. From behind the cage, Rutger McGroarty (Lincoln, Neb.) found Cooley camped at the right circle where he collected and fired a wrister for his 12th goal of the season. Jimmy Snuggerud (Chaska, Minn.) picked up the secondary helper on the 2-0 goal.

Gauthierjoined the scoring parade on a second-chance goal before the midway point of the opening period. Oliver Moore (Mounds View, Minn.) took the first shot which was stopped, but Cole Spicer (Grand Forks, N.D.) picked up the rebound in the slot and slid a pass to Gauthier who tapped in for his 10th score of the season.

Nazar netted his second of the afternoon to make it four in a row for the home team. Kaden Muir (Manchster, N.H.) started the rush when he found Howard up the right wing. Howard sauced a pass the width of the ice to Nazar who cut towards the center and blew by the Steel defense before finishing five-hole for his 10th marker of the campaign and a 4-0 USA lead.

Chicago's Andon Cerbone scored with just over three minutes to play in the first to make it a 4-1 game after 20 minutes of action.

Cooley potted his second of the game just 34 ticks into the middle period with a shot from the same spot as his first. Lane Hutson (North Barrington, Ill.) found Howard for the first shot from the left wing and the rebound bounced off the pads of Homer and right back to Howard. He found Cooley at the right wing where he fired home to take over the team lead in goals with 13.

The Steel's Sam Lipkin responded with a Chicago power-play goal at 3:57 of the second and Adam Fantilli made it a 5-3 game before the close of the middle frame.

After the first 10 minutes of the third was played without a goal, Team USA recorded scores on back-to-back breakaways just 30 seconds apart. McGroarty netted the first, unassisted, with a five-hole finish behind the Steel defense.

Gauthier followed on the next sequence with his second of the game after Moore sprung him behind the defense. The Boston College commit went blocker-side on Homer to make it 7-3.

Chicago added goals from Fantilli and Nick Moldenhauer late in regulation for the 7-5 final.

Dylan Silverstein (Calabasas, Calif.) returned to the U18s lineup to pick up the win in net as he finished the evening with 27 saves.

The U18s head to America's Dairyland for a pair of games next weekend, beginning with a Thursday night matchup against the University of Wisconsin Badgers. Puck drop is set for 8:00 p.m. ET from the Kohl Center in Madison.