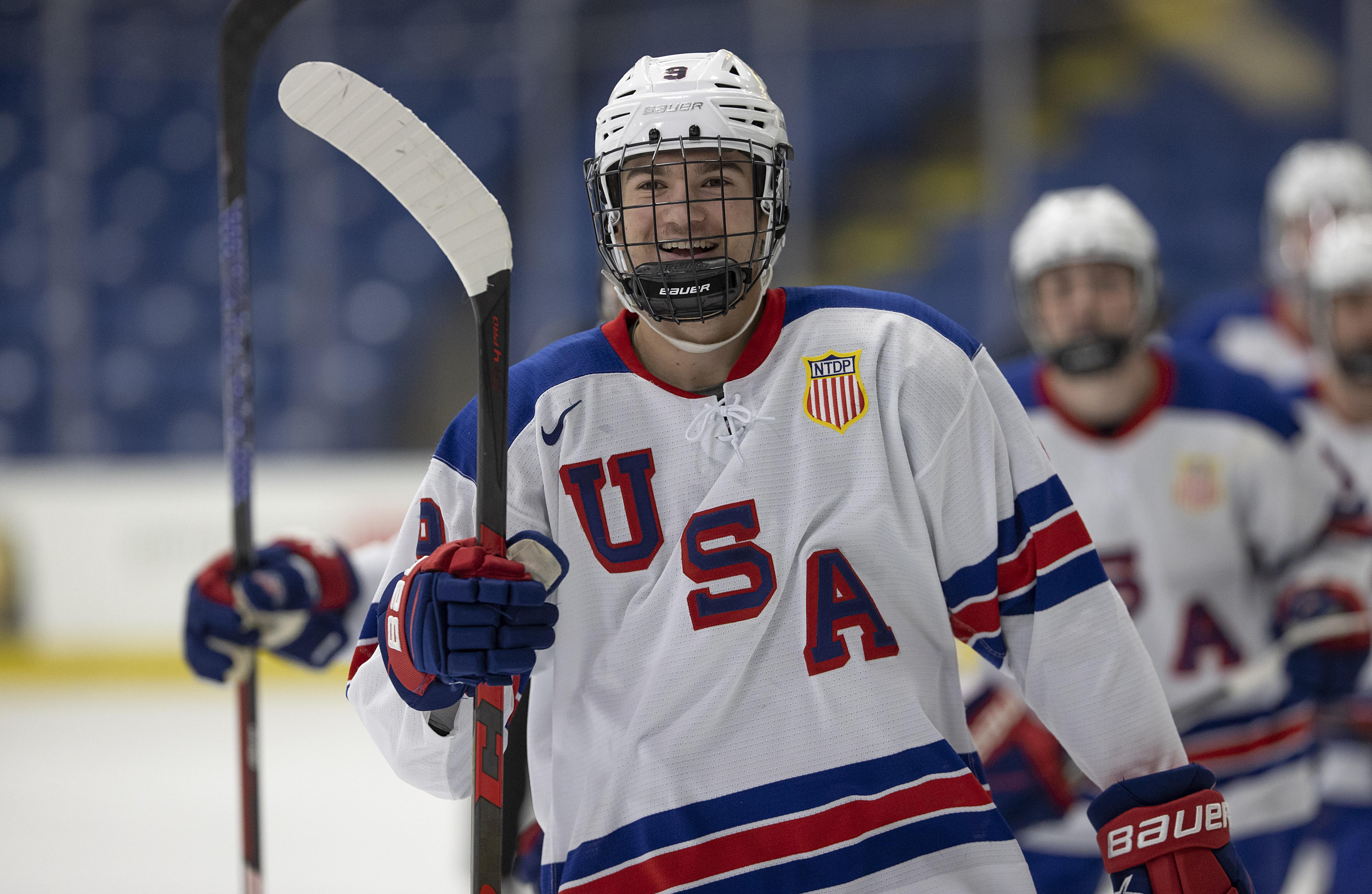 PLYMOUTH, Mich. - Jimmy Snuggerud (Chaska, Minn.) collected his third hat-trick in the team's past six games and Logan Cooley (Pittsburgh, Pa.) added a five-point night to lead the U.S. National Under-18 Team to an 8-1 win over the Buffalo State Bengals Friday evening at USA Hockey Arena.

Team USA took a 1-0 lead on a second-chance score from Snuggerud at 7:45 of the opening period. Cooley pushed the play into the offensive zone and Snuggerud fired his first shot from the left circle that was stopped by Emil Norrman. Rutger McGroarty (Lincoln, Neb.) collected the rebound, circled behind the net and fed Snuggerud alone in the slot where he one-timed a shot for his 10th score of the season.

Snuggerud made it a pair on the evening when he potted a one-timer from the left wing on the power play to make it a 2-0 game before the close of the first period. Cutter Gauthier (Scottsdale, Ariz.) fed him with a cross-ice feed and Snuggerud snuck his shot in the corner before Norrman could slide to cover. Seamus Casey (Fort Myers, Fla.) picked up the secondary helper on the score.

Cooley picked up his second point of the night when he smacked a feed from Snuggerud past Norrman just over a minute into the middle frame. Seamus Powell (Marcellus, N.Y.) dropped a pass to a cutting Snuggerud who found Cooley alone on the backside of the net for his 11th goal of the year.

Lane Hutson (North Barrington, Ill.) picked up his second goal of the season to extend the lead to 4-0 with a beautiful display of individual skill. Off of passes from Charlie Leddy (Fairfield, Conn.) and Cooley, Hutson collected at the left point, sidestepped one defender and deked the goaltender before flipping his shot over the shoulder of Norrman.

The home team made it five it in a row with a quick wrist-shot in transition from Marek Hejduk (Parker, Colo.). He found a loose puck in the neutral zone off the skate of Frank Nazar III (Mount Clemens, Mich.), took two strides into the offensive zone and wired a shot from between the circles for his eighth marker of the season. Hunter Brzustewicz (Washington Twp., Mich.) picked up a helper to give him five points over his last five games played.

Bengals forward Andrew Logar put Buffalo State on the board before the end of the second period to make it a 5-1 game after 40 minutes.

Oliver Moore (Mounds View, Minn.) netted his second goal in as many games when he finished an odd-man rush from the right circle off a great set-up from McGroarty. Cooley collected a helper to give him four points on the night on the goal that made it 6-1.

Snuggerud completed the hat-trick late in the third off a nice set-up from Cooley and Isaac Howard (Hudson, Wis.) collected the last goal of the evening for the 8-1 final, set up by Nazar.

In his first action with the U18s, goaltender Carsen Musser (Sherburn, Minn.) made 18 saves and played the entire game to pick up the win for Team USA.

The U18s complete the weekend with a Sunday matinee against the Chicago Steel at USA Hockey Arena. Puck drop is slated for 4:00 p.m. and can tickets are available at USAHockeyNTDP.com/tix.