Howard, McGroarty, Gauthier and Hejduk all pick up a pair of points in win 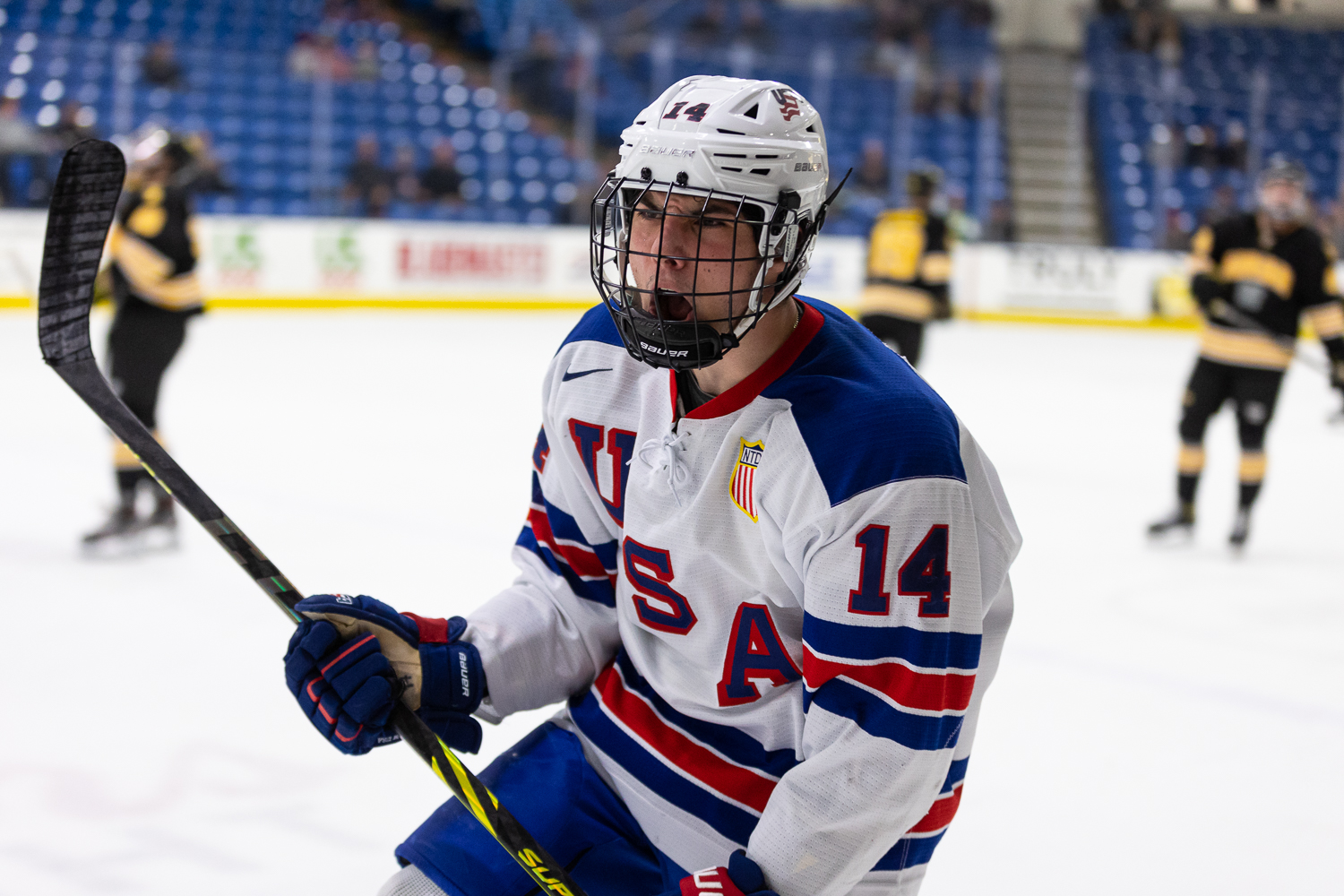 PLYMOUTH, Mich. - The U.S. National Under-18 Team scored seven goals over the final 35 minutes of play to come from behind and beat the Adrian College Bulldogs, 7-4, Wednesday evening at USA Hockey Arena.

With the victory, the U18s swept the two-game season series with Adrian for the year.

Adrian's Trevor Coykendall scored the lone goal of the opening frame when a net-front scramble ended with the puck underneath USA goaltender Tyler Muszelik (Long Valley, N.J.), before Coykendall forced it over the goalline for a lead at 7:41 of the period.

Coykendall doubled the Bulldogs lead nearly six minutes into the second period when he one-timed home a feed from Zach Heintz from just inside the right faceoff circle.

Forty seconds later, Oliver Moore (Mounds View, Minn.) netted his first goal with the U18s to cut the lead back to one. Cutter Gauthier (Scottsdale, Ariz.) led the offensive charge and got the first shot on net that was stopped by Cam Gray. The rebound squirted free and Cole Spicer (Grand Forks, N.D.) tapped it back to Moore who roofed his shot to make it a 2-1 game.

Team USA tied the game on a power-play goal off the stick of Rutger McGroarty (Lincoln, Neb.). Forward Isaac Howard (Hudson, Wis.) took the first shot that went wide but right to Jimmy Snuggerud (Chaska, Minn.) along the left-wing boards. He dropped a pass to McGroarty who charged towards the net and chipped a backhand attempt over the shoulder of Gray to even the game at 2-2.

Gauthier made it three in a row for the home team and gave the U18s their first lead of the night with a wicked wrister from the left point on the power play at 16:19 of the middle period. Marek Hejduk (Parker, Colo.) fed Seamus Casey (Fort Myers, Fla.) at the point. He slid his pass for Gauthier on the left side where he made no mistake to net his ninth of the season.

Ty Enns scored less than a minute later to produce another tie in the game, but  Isaac Howard (Hudson, Wis.) gave Team USA the advantage going into the third when he scored with just four seconds to play in the frame. Hejduk applied the forecheck and found Howard in the slot from behind the net. The future Minnesota Duluth forward collected and sniped a backhand shot by Gray. Lane Hutson (North Barrington, Ill.) picked up the secondary helper on the score.

Less than 30 seconds into the third, Muszelik made the initial stop on a Bulldogs attempt but Zach Goberis connected on a second chance with a spinning wrist shot tie the game at four goals apiece.

The U18s stormed back with a trio of goals in the final five minutes of regulation that began with the eventual game-winner from Frank Nazar III (Mount Clemens, Mich.). After an Adrian defensive-zone turnover, Nazar picked up the loose puck and rifled his shot past Gray for the final lead the U18s would need of the night.

Logan Cooley (Pittsburgh, Pa.) followed with a goal that barely snuck by Gray and cradled into the net at the goalline and was upheld by video review. McGroarty and Seamus Powell (Marcellus, N.Y.) picked up assists on the 6-4 goal.

Tyler Duke (Strongsville, Ohio) capped the game with an empty-netter he shot the length of the ice for his first marker of the season.

Muszelik finished the night with 22 saves as he pushed his record to 9-1-1 on the year.

The U18s return to home ice Friday night as they continue the Kroger College Series and host the Buffalo State Bengals. Tickets are available at the USA Hockey Arena box office by calling 734-453-6400 x396 or at USAHockeyNTDP.com/tix.