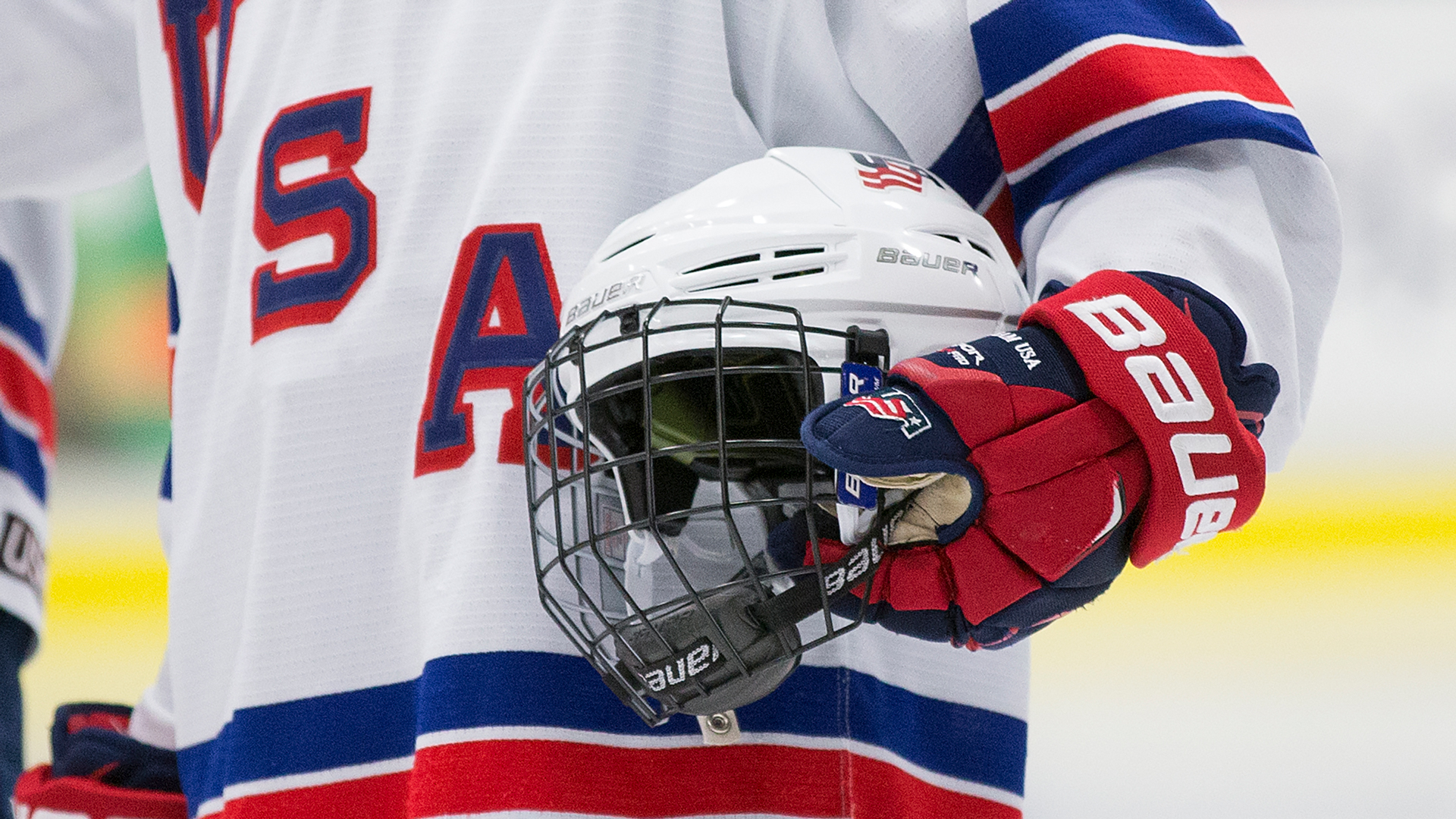 The wait was worth it in the end as both USA Hockey National Team Development Program teams took home top honors at their respective international tournaments earlier this month. It marked the first time since February 2018 that both teams won titles in international play. 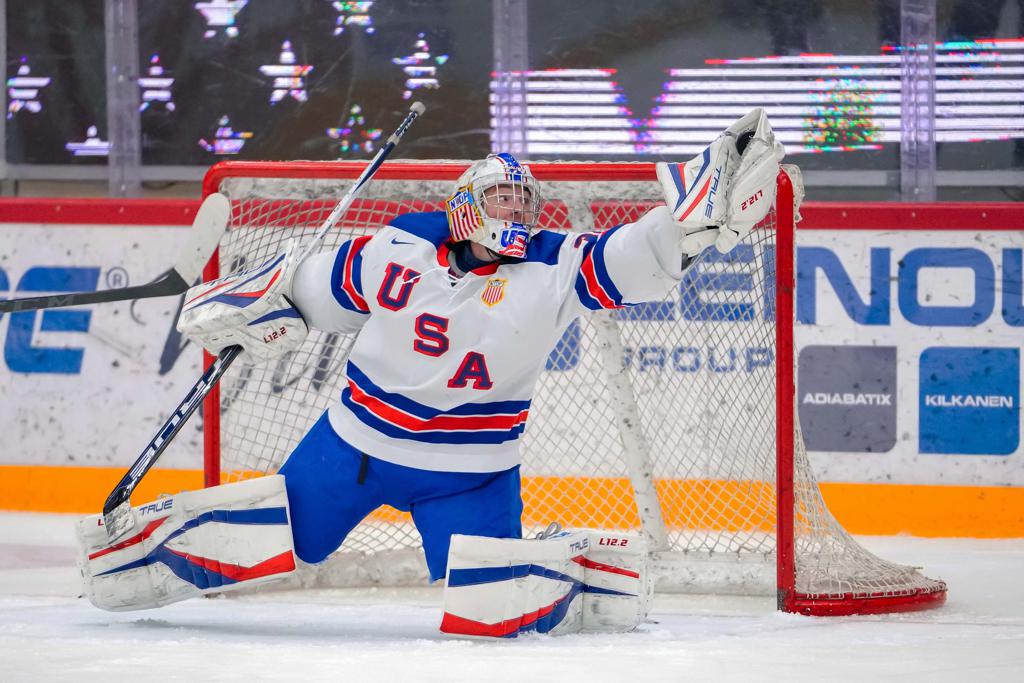 Trey Augustine makes a glove save at Four Nations

“It was great to see our hard work pay off,” said U17 head coach Dan Muse. “The guys really came together, and we were able to see the progress that we had made from the start of the year to now. It was the first time that we were playing in our age group and they really put in the work to prepare for the tournament. We were so happy for our players to find that success, be rewarded and win the trophy.”

For U17 forward Oliver Moore and goalie Trey Augustine, it was an experience that they will never forget.

“It was amazing,” said Moore, who tallied three goals and six points in the tournament. “The feeling that you get when you put on the jersey and represent your country, it’s unbelievable. You have so much pride in wearing the logo. It was a crazy experience and something that I will never forget.

“The Czech game is when everyone really bought in. We wanted to play for the win. In order to win, we had to play for our teammates.”

For Augustine, it also marked his first time playing overseas.

“It was cool, playing in my first international tournament [outside of Canada],” said Augustine, who started all three games in net. “The first time we stepped onto the ice and to see the other country in their jersey, it was surreal since you are representing the United States and wearing the colors and logo, too.”

In the final contest, Augustine stopped 23-of-24 shots in the 2-1 win over the Czech Republic. It was a memory that he will always carry with him.

“I will remember the Czech game; it was one of the hardest games for us as a team. We knew that game would decide who would win the tournament and we wanted it,” he said. “Playing the games in the USHL really helped get us ready to play in this tournament.”

Muse could see the growth and development of the U17s from the start of the season to this first international tournament break.

“For me, it was seeing the work that they had put in in this first tournament,” he said. “The players have shown growth, both individually and as a group. I hope they feel that reward and see the work that they put in on a daily basis. You can see the gains they made in practice and off the ice. I hope it will drive them even more to improve their game.”

The U17s begin a stretch of six USHL games and one contest at Shattuck-St. Mary’s, starting with a Nov. 24 matinee contest against the Muskegon Lumberjacks at USA Hockey Arena. Muse is hoping that the team can take some of the lessons learned abroad and apply them to the upcoming schedule.

“It’s definitely different playing older players when you compare and contrast how it felt different in international games,” he said. “It’s definitely hard to play within your own age group, too. Now, we are returning to USHL play and we need to take the successes we had internationally and apply those lessons into this next stretch of games.” 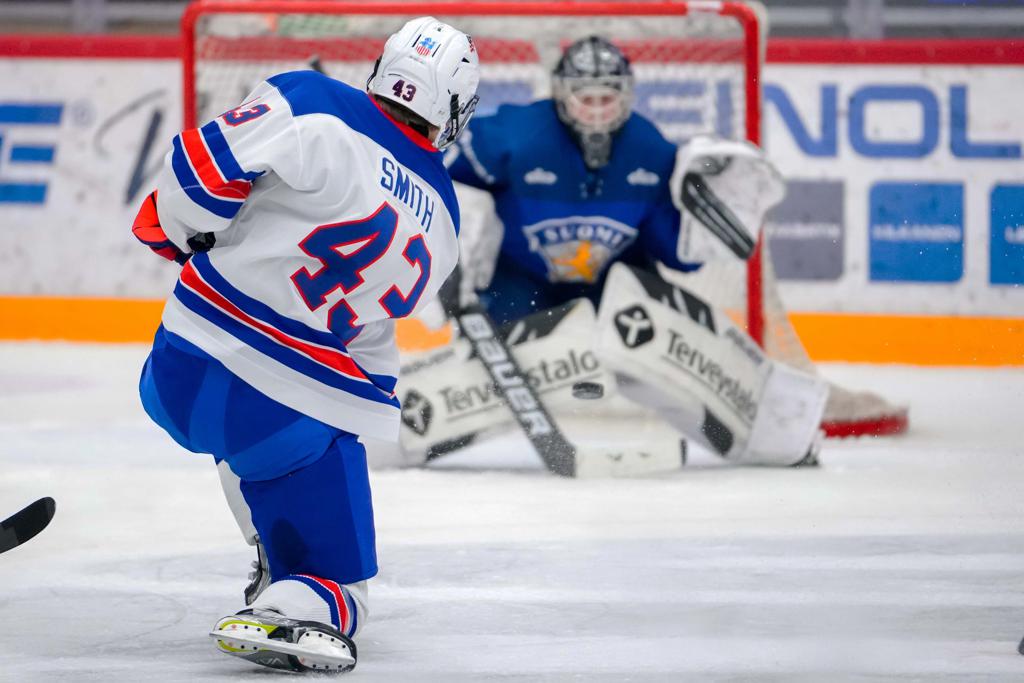 U17 forward Will Smith attempts a shot against Finland

Augustine understands how important it is to continue to improve during this stretch before the squad’s second international tournament in Slovakia, starting in mid-December.

“We need to keep getting better every day; that is our motto,” he said. “We need to take every game and help build on it as we play our next few games and get ready for our second international tournament.”

The long wait for the U18s is finally over as they also captured top honors — this time at the Five Nations in Switzerland in their first-ever international tournament as a team. The squad posted wins over Sweden (5-2 on Nov. 10), Switzerland (7-0 on Nov. 11), Czech Republic (9-1 on Nov. 12) and Finland (9-2 on Nov. 14). For both the coaching staff and players, it felt surreal at times.

“It was great to get the win especially after last year, [with no international tournaments due to COVID]” said U18 head coach Adam Nightingale. “The players and coaches were very excited. To be able to represent your country, it gave it more meaning and I was proud of our effort. 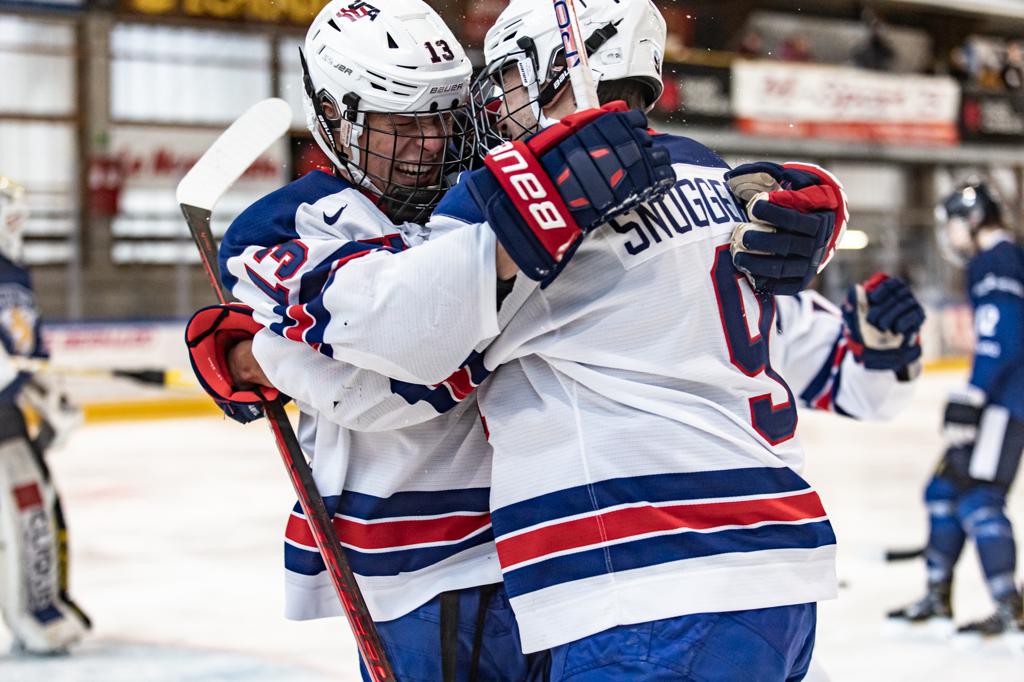 “We talked about getting better each game. We started the final game against Finland going up 4-0 in the first period and the guys could really see that effort playing out. They worked hard and got to bring home the trophy.”

U18 forward Rutger McGroarty, who led the U18s in scoring with four goals and eight points, also was grateful to finally play internationally in his own age group.

“Honestly, it was extremely cool,” he said. “We missed out on it last year and that was the longest an NTDP [team] had gone without playing internationally. We do want to be top dogs, but we know we still have work to do to improve since we will still see Canada and Russia.”

Meanwhile, U18 forward Jimmy Snuggerud, who tallied two hat-tricks and finished with seven points during the tournament, enjoyed his first international experience.

“It was really great to play guys our own age,” he said. “It was definitely more skilled games, and I really enjoyed it. It was amazing to see how different each of the teams were as the Czechs played well defensively while the Swiss were more offensive oriented. All the teams were skilled across the board."

It should be no surprise that one of McGroarty’s favorite moments was the final game against Finland.

“We knew that if we win then we win it all, and of course, if [Finland] would win that game, they will win the tournament,” he said. “The guys before the game were really fired up. It was our first international tournament and we wanted to win for us and for the coaches. We were very hungry to win.”

Even then, the team is not satisfied. McGroarty understands the work that still needs to be completed in order for the team to achieve their final goal.

“We know what we need to work on to improve every single day, and we need to stick to our game plan. We need to play the right way,” he said. 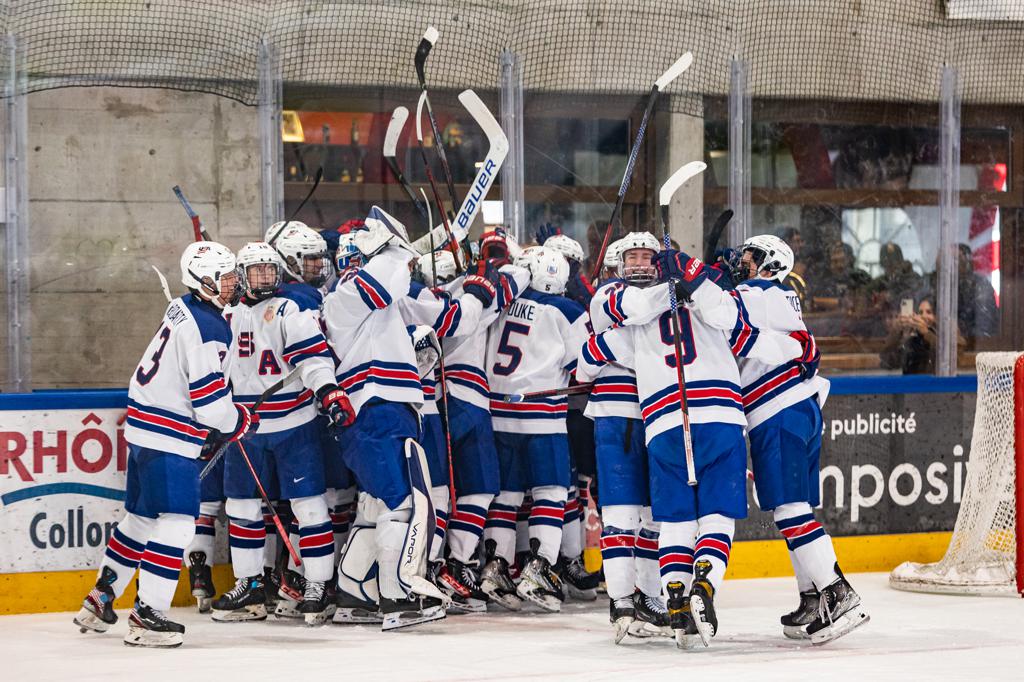 The U18s will have a busy upcoming week with three games in five days at USA Hockey Arena. It starts out with a Nov. 24 tilt against Adrian College, followed by a Nov. 26 contest against Buffalo State and ends with a Nov. 28 game against the Chicago Steel.

“I think we will be ready to hit the ground running,” said Nightingale. “We are coming off that first international tournament win, and the players were able to go home for a few days and we will make sure that we are ready to go.”

Snuggerud is looking forward to getting back out on the ice with his teammates.

“We need to keep playing how we can play, both on the offensive and defensive side,” he said. “We need to play that way each night.”

And now, both teams have that extra motivation for success.