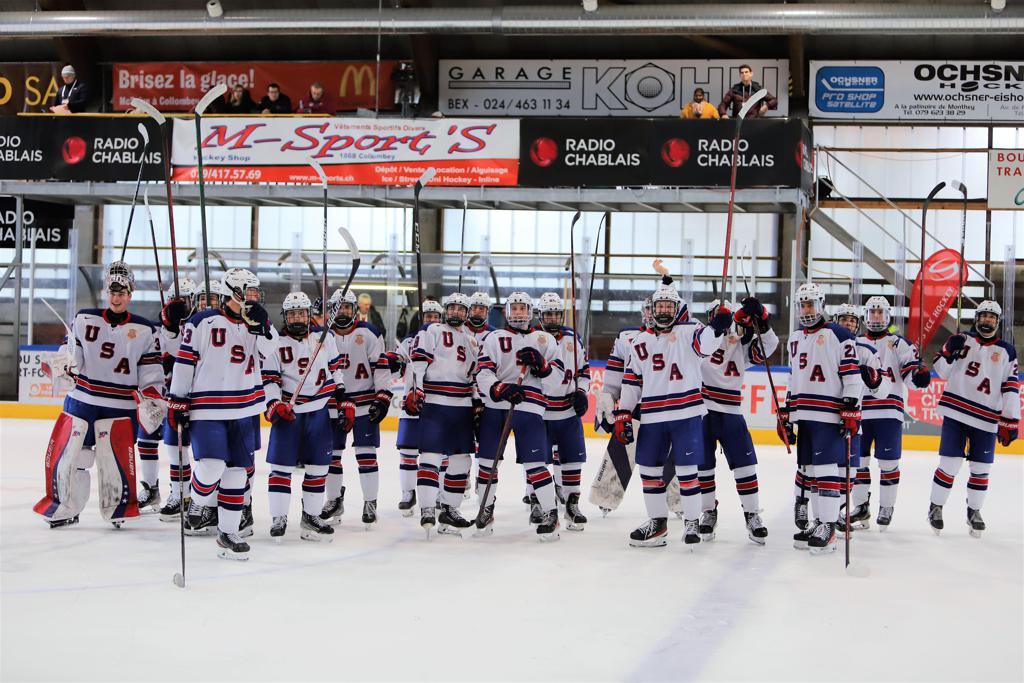 MONTHEY, Switzerland - The U.S. Under-18 Men's National Team beat Finland, 9-2, on Sunday morning to win the 2021 U18 November Five Nations behind a hat-trick from Jimmy Snuggerud (Chaska, Minn.), the forward's second of the tournament.

The Under-18 Team won its first ever international competition as a team, the first U.S. U18 tournament victory since the 2019 Five Nations in Sundsvall, Sweden.

Team USA raced out to a 4-0 lead after 20 minutes of action that began with Snuggerud's first tally 32 seconds into the game. Rutger McGroarty (Lincoln, Neb.) found Snuggerud in the neutral zone, where he carried it to the attacking right faceoff circle and ripped a shot clean over the shoulder of Niklas Kokko for the game's first goal. Lane Hutson (Barrington, Ill.) collected a helper on the opening score.

Just over a minute later, Devin Kaplan (Bridgewater, N.J.) converted on a 2-on-0 break to extend the lead to 2-0. A Cutter Gauthier (Scottsdale, Ariz.) feed sprung Kaplan and Cole Spicer (Grand Forks, N.D.) behind the Finnish defense and Spicer feathered a late pass to Kaplan running the left lane for an easy tap-in and the BU commit's third goal of the season.

A really pretty passing display on the man advantage led to a Frank Nazar III (Mount Clemens, Mich.) goal and 3-0 lead at 6:26 of the first period. From the point, Hutson went to Logan Cooley (Pittsburgh, Pa.) at the right faceoff circle where he faked the one-timer and shifted a pass for Nazar in the slot. He steadied the puck and cornered his wrist-shot top-shelf for his seventh marker of the campaign.

Snuggerud added his second of the morning with five minutes to play in the first, netting the team's second man-up goal of the period. Seamus Casey (Fort Myers, Fla.) spotted Snuggerud on the left wing, where the forward crept in and fired from the left face-off dot to make it four straight for Team USA.

Spicer found pay dirt on a greasy goal in front of the cage late in the middle period for Team USA's third PPG of the morning. Gauthier put a shot on net that ricocheted to Snuggerud along the left wing. His shot was stopped by Kokko as well, but Spicer followed on the third chance to extend the USA advantage to 5-0.

Jani Nyman put the Finns on the board 32 seconds later to make it a 5-1 game after 40 minutes of action. Nyman added his second off a Finnish 3-on-2 rush early in the third period to bring Finland within 5-2.

Cooley restored the USA's four-goal lead with a seemingly harmless shot from just inside the blue-line at 7:01 of the third. Ryan Leonard (Amherst, Mass.) chipped the puck along the boards behind the net to Ryan Chesley (Mahtomedi, Minn.) at the right wing. He left the puck for Cooley who circled around the top of the zone and floated his shot in to make it a 6-2 game.

Team USA added a trio more in the game's final eight minutes. Kaplan added his second of the game on a 5-on-3 advantage. Gauthier fed Spicer in front of the net who tried to jam it home, but the puck squirted out to Kaplan on the weak side who deposited it in the net.

McGroarty added another with just under five minutes to play when he forced a Finnish defensive-zone turnover, spun around and fired home from the slot.

Snuggerud capped the hat-trick when he one-timed home a feed from Tyler Duke (Strongsville, Ohio) with 44 seconds to play in the game.

Team USA goaltender Tyler Muszelik (Long Valley, N.J.) went the distance in the cage and made 12 saves as he picked up his third win of the tournament in as many starts.

The Under-18 Team will next play internationally at the February Five Nations tournament to be held in Rauma, Finland.