Under-18 Team Flies Past Czech Republic, 9-1

Howard and Hutson pick up four points apiece in win 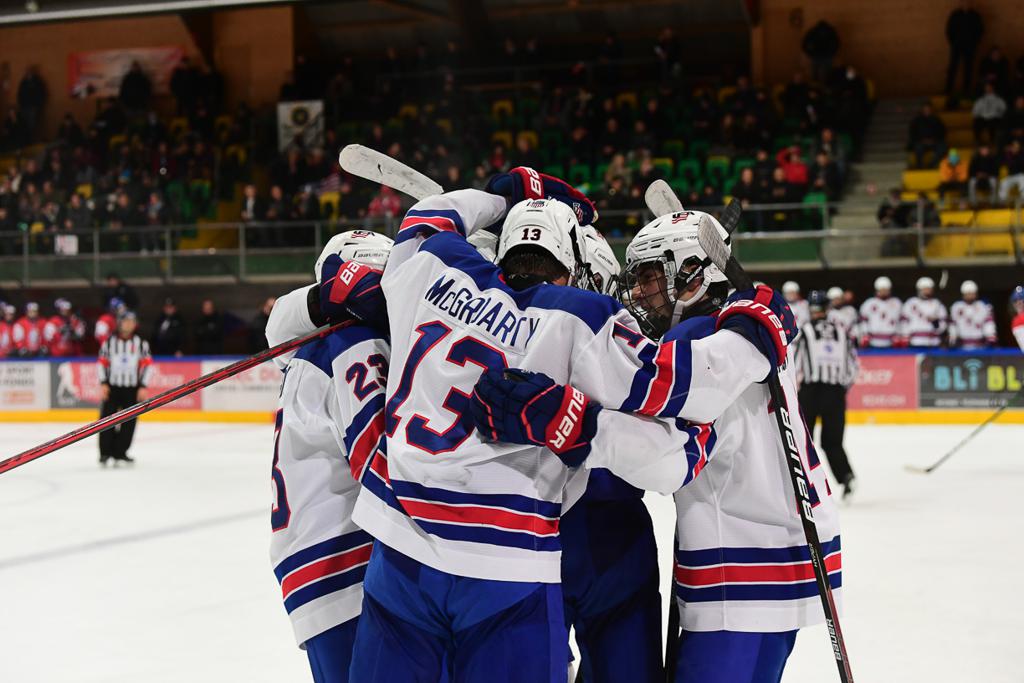 USA captain Rutger McGroarty (Lincoln, Neb.) put the U18s up 1-0 when he finished a rebound attempt on the power play in front of the Czech cage. Hutson fed Logan Cooley (Pittsburgh, Pa.) for a one-timer from the right circle that was saved by Stepan Vopravil. McGroarty found the loose rebound and tucked home for the game's first goal at 4:04.

The U18s doubled the lead before the close of the first period off the stick of Cole Spicer (Grand Forks, N.D.). Devin Kaplan (Bridgewater, N.J.) pushed a pass to Cutter Gauthier (Scottsdale, Ariz.) who skated behind the Czech net. He drew the netminder out before sliding a backdoor pass that Spicer deposited for his sixth score of the season.

Team USA got its third marker when Gavin Brindley (Estero, Fla.) converted a one-timer on one knee off a beautiful set-up from Howard. Howard was first to the puck off a dump-in from Hutson and feathered a pass through the crease that Brindley slammed home for his first goal since joining the U18s last week.

Cooley followed at 15:27 of the middle period with another power-play tally to push the lead to 4-0. McGroarty left a crease scrum with the puck and pushed it up to Hutson at the point. The defenseman shifted over to Cooley who buried his one-timer from the right faceoff circle for his eighth score of the season.

Howard made it five in a row when he found himself in the right spot at the right time on a rebound attempt with just four seconds to play in the second. Frank Nazar III (Mount Clemens, Mich.) started the play below the goalline and Brindley took the first shot on net. Vopravil got a shoulder on it but Howard was sitting on the doorstep for the rebound and his seventh score of the year.

Team USA added a quartet in the final period that started with Hunter Brzustewicz's (Washington Twp., Mich.) power-play goal 96 seconds into the period. He ripped home a shot off a feed from Nazar that gave him his second goal in two days.

After the Czech's Adam Dvorak put his team on the board, Howard responded with another PPG for the U.S. He dangled between two defenders before sliding his shot five-hole to make it a 7-1 game.

Spicer added his second goal of the game after he intercepted a Czech pass in the defensive zone and went the length of the ice unabated and finished with a nifty move through the goaltender's pads.

McGroarty capped the scoring when he slammed home a one-timer on a 2-on-1 rush that was set up by Cooley and Hutson.

Tyler Muszelik (Long Valley, N.J.) was stout in net for Team USA and turned aside all but one Czech shot to pick up his second win of the tournament and seventh overall on the season.

The Under-18 Team is off tomorrow before finishing the Five Nations Sunday morning against Finland. Puck drop is scheduled for 4:00 a.m. ET / 10:00 a.m. CET and can be seen on the Swiss YouTube channel.