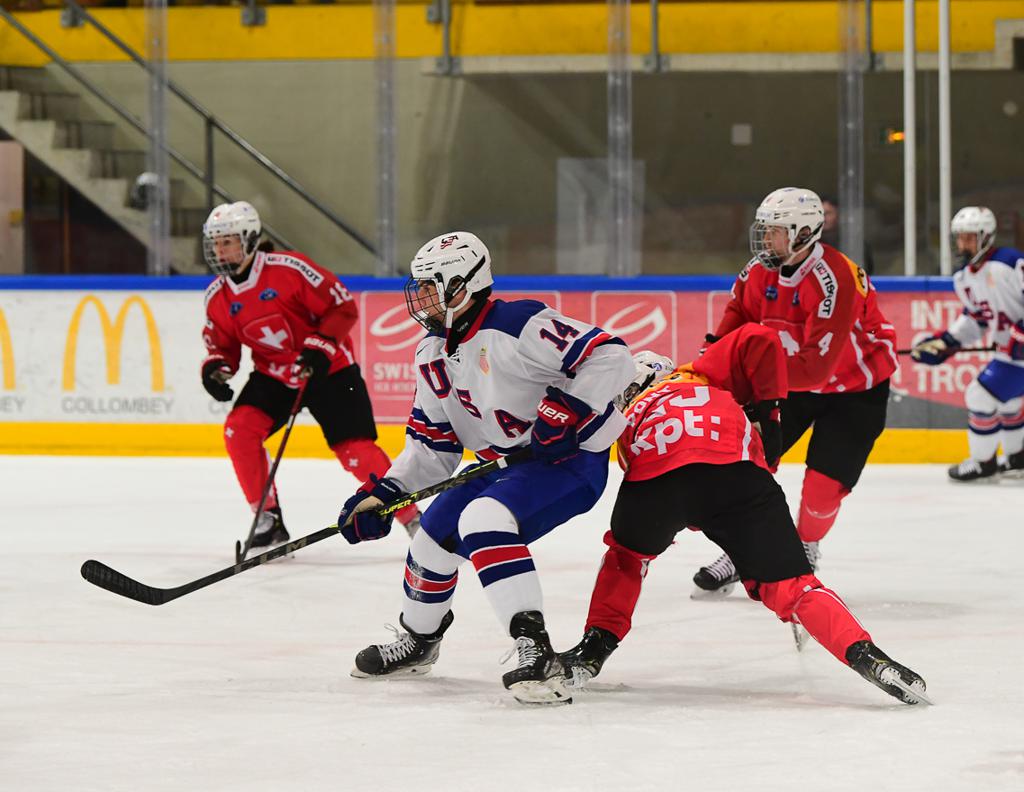 Frank Nazar III (Mount Clemens, Mich.) wasted no time putting Team USA on the board as he connected on his second shot of the game, 73 seconds into the contest. Gavin Brindley (Estero, Fla.) fed Nazar into the offensive zone for the first chance that was stopped by Swiss netminder Loris Uberti. The puck got worked around to Isaac Howard (Hudson, Wis.) in the corner where he centered a feed back to Nazar who tapped in for his sixth score of the season.

Defenseman Seamus Casey (Fort Myers, Fla.) pushed the U.S. lead to 2-0 at 5:41 of the opening period with a wicked wrist-shot from the right circle. As a man advantage expired,  Cole Spicer (Grand Forks, N.D.) found Hunter Brzustewicz (Washington Twp., Mich.) at the left point. He went D-to-D for Casey who fired his shot bar-down on his fourth score on the campaign.

Casey added his second of the evening with another quick wrister after he was the trailer on an odd-man rush. Devin Kaplan (Bridgewater, N.J.) made a nice defensive play behind the Swiss cage to force a turnover. He carried the puck to the left faceoff dot and found a streaking Casey, who fired his shot from the slot over the shoulder of Uberti for a 3-0 lead.

Before the close of the middle period, USA captain Rutger McGroarty (Lincoln, Neb.) netted his first goal of the tournament off a pretty give-and-go play with Spicer. Casey fired a pass from the U.S. net to McGroarty entering the zone along the left wing. He faked a Swiss defenseman and fed Spicer who returned the feed for an easy tap-in for McGroarty's fifth marker of the year.

Howard made it five in a row for the visitors with his second goal in two days. After a scrum in the defensive zone, Nazar came out with the puck and found Howard racing down the right wing. He blew by the Swiss defense and chipped a shot over the shoulder of the goaltender at 1:14 of the final period.

Cutter Gauthier (Scottsdale, Ariz.) scored halfway through the final period while shorthanded to extend the USA advantage. He stick-lifted the Swiss player to steal the puck and skated the length of the ice before he beat the goalie under the blocker for his eighth score of the season.

Brzustewicz capped the game's scoring with a second shorthanded marker on the same power play. Brady Berard (East Greenwich, R.I.) dug the puck out of a scramble and to lead Brzustewicz on a 3-on-1 break. The defenseman faked a pass before coming to a stop and sliding his shot five-hole for the final goal of the game. The goal was Brzustewicz's first career tally in an NTDP sweater.

Chambre did not allow a goal to pick up his first shutout for the red, white and blue. His best save came late in the second period when he stoned Swiss captain Mattheo Reinhard on a breakaway chance.

Team USA will skate for the third time in three days as they take on the Czech Republic tomorrow evening in Monthey. Puck drop is slated for 2:00 p.m. ET / 8:00 p.m. CET and will be streamed on the Swiss Federation YouTube.