USA back in action tomorrow afternoon against host Switzerland 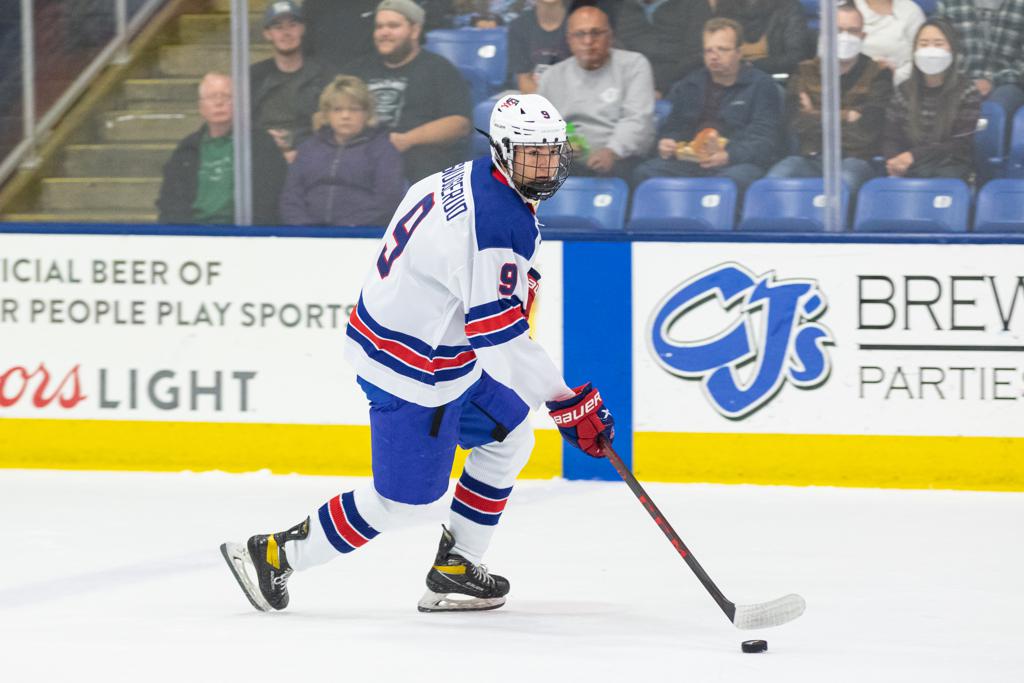 MONTHEY, Switzerland - The U.S. National Under-18 Team defeated Sweden, 5-2, in the opening game of the Five Nations tournament Wednesday afternoon behind a natural hat-trick from forward Jimmy Snuggerud (Chaska, Minn.).

Sweden netted first when Tim Almgren lifted a quick wrist-shot over the glove of USA netminder Tyler Muszelik (Long Valley, N.J.) with 7:51 to play in the opening period, but Snuggerud responded back with the game's next trio of goals.

The Minnesota native evened the game with a quick snap-shot of his own just over a minute later. After a defensive-zone turnover from the Swedes, Rutger McGroarty (Lincoln, Neb.) found the loose puck and a cutting Snuggerud in the slot. He collected the pass and fired a wrister past Hugo Havelid to even the score at 1-1.

Snuggerud gave the U18s a lead before the end of the opening period when he netted his second of the afternoon, again converting off a defensive-zone mishap from Sweden. The forward applied the forecheck and forced the turnover along the left-wing boards. He took the puck and circled towards center ice before he found the top-left corner of the net with another quick wrist-shot from the slot for a 2-1 advantage.

Snuggerud completed the feat 65 seconds into the middle frame when he banged home a rebound opportunity in front of the cage to double the U18s lead. Lane Hutson (North Barrington, Ill.) fed Logan Cooley (Pittsburgh, Pa.) for the original shot that Havelid got a piece of. The puck floated around the crease before Snuggerud found it and tapped in for his third consecutive goal and a 3-1 lead.

Team USA made it four in a row when Marek Hejduk (Parker, Colo.) converted a beautiful breakaway while shorthanded.  After a big Muszelik save, Brady Berard (East Greenwich, R.I.) chopped at the puck to spring Hejduk alone behind the defense. The Harvard University commit dragged from forehand to backhand before flipping his shot over a sprawled Havelid for his seventh score of the season.

After Filip Bystedt scored on the ensuing power play, Isaac Howard (Hudson, Wis.) restored the U18s' three-goal lead when he slammed home a one-timer off an odd-man rush at 6:59 of the third. Again after a Muszelik pad save, Howard found the rebound and shifted a pass up the ice to Frank Nazar III (Mount Clemens, Mich.). Nazar drove the right wing, delayed and found Howard with a backdoor feed as he was sprinting down the left wing for the final goal of the game.

Muszelik went the distance in net for Team USA and made multiple big stops in the third period to secure the lead and eventual win. His record improved to 6-1-1 on the season with the win.

The team is back in action tomorrow afternoon when they take on host Switzerland. Puck drop is scheduled for 2:00 p.m. ET / 8:00 p.m. CET and will be streamed on the Swiss YouTube channel.