U18s Head Into Break With 4-3 Win Over Adrian 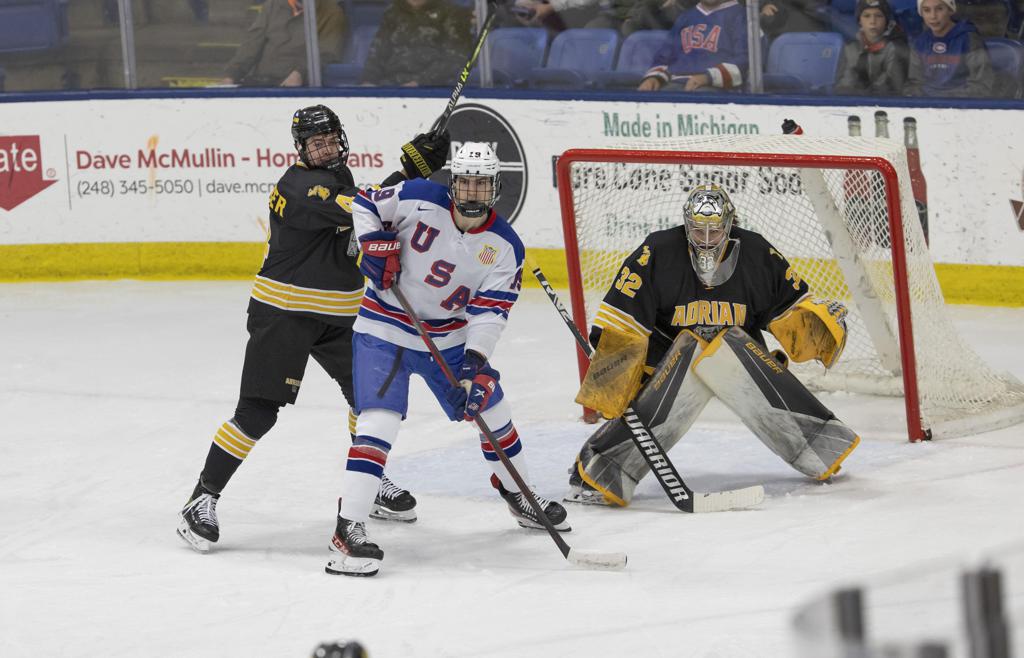 The matchup was the U18s' final before their first international trip of the season as they head to Switzerland next week to compete in a Five Nations tournament.

After Adrian's Rex Moe opened the scoring at 2:15 of the first period, Team USA defenseman Seamus Casey (Fort Myers, Fla.) evened the score at the 4:30 mark of the frame. Off an entry feed from Ryan Chesley (Mahtomedi, Minn.), forward Frank Nazar III (Mount Clemens, Mich.) shifted the puck to Isaac Howard (Hudson, Wis.) between the faceoff circles, who found Casey on the left wing. The Florida native wasted no time, firing his shot into the short-side top corner to put the score at one apiece.

Howard recorded his second point of the night off a tremendous individual effort to net his third goal of the season. Nazar chipped a pass up the right wing boards that Howard collected and raced alone into the offensive zone. He angled to his left and flew by the defense before depositing his shot through the five-hole of Cam Gray for a 2-1 lead.

The U.S. advantage was doubled at 11:59 of the middle frame off a rebound tap-in from Cutter Gauthier (Scottsdale, Ariz.). Hunter Brzustewicz (Washington Twp., Mich.) set up Cole Spicer (Grand Forks, N.D.) for a shot from the right faceoff circle, which was stopped by the right pad of Gray. Gauthier was first to the loose puck and tapped in the second chance for a 3-1 USA lead.

The Bulldogs' Zach Heintz cut the lead back to one when he converted off a USA defensive-zone turnover with a backhand flip in the top of the net as 18:14 remained in regulation.

Howard responded with his second marker of the night, set up from a pretty Lane Hutson (North Barrington, Ill.) feed to make it a 4-2 game. U18 newcomer Gavin Brindley (Estero, Fla.) found Hutson at the blue-line, where he danced around a defender and feigned a shot before shifting the puck over to Howard who blasted the one-timer past Gray to restore the two-goal lead.

Sam Ruffin brought the Bulldogs back within a goal at 11:09 of the third when he went bar-down on the Adrian power play to make it 4-3.

Team USA netminder Tyler Muszelik (Long Valley, N.J.) picked up 22 saves on the night for his fifth win of the season. The future New Hampshire Wildcat shut the door on a Bulldog frenzy of shots late in regulation to secure the win for the U18s.

Team USA outshot the Bulldogs by a wide 43-25 margin on the night and improved its record to 4-1-0 on the season when reaching the 40-shot plateau.

The team heads overseas next week to Monthey, Switzerland, to compete in a Five Nations tournament with the host Swiss, Finland, Sweden and Czech Republic. They return home next on November 24 for a rematch with the Bulldogs at USA Hockey Arena.