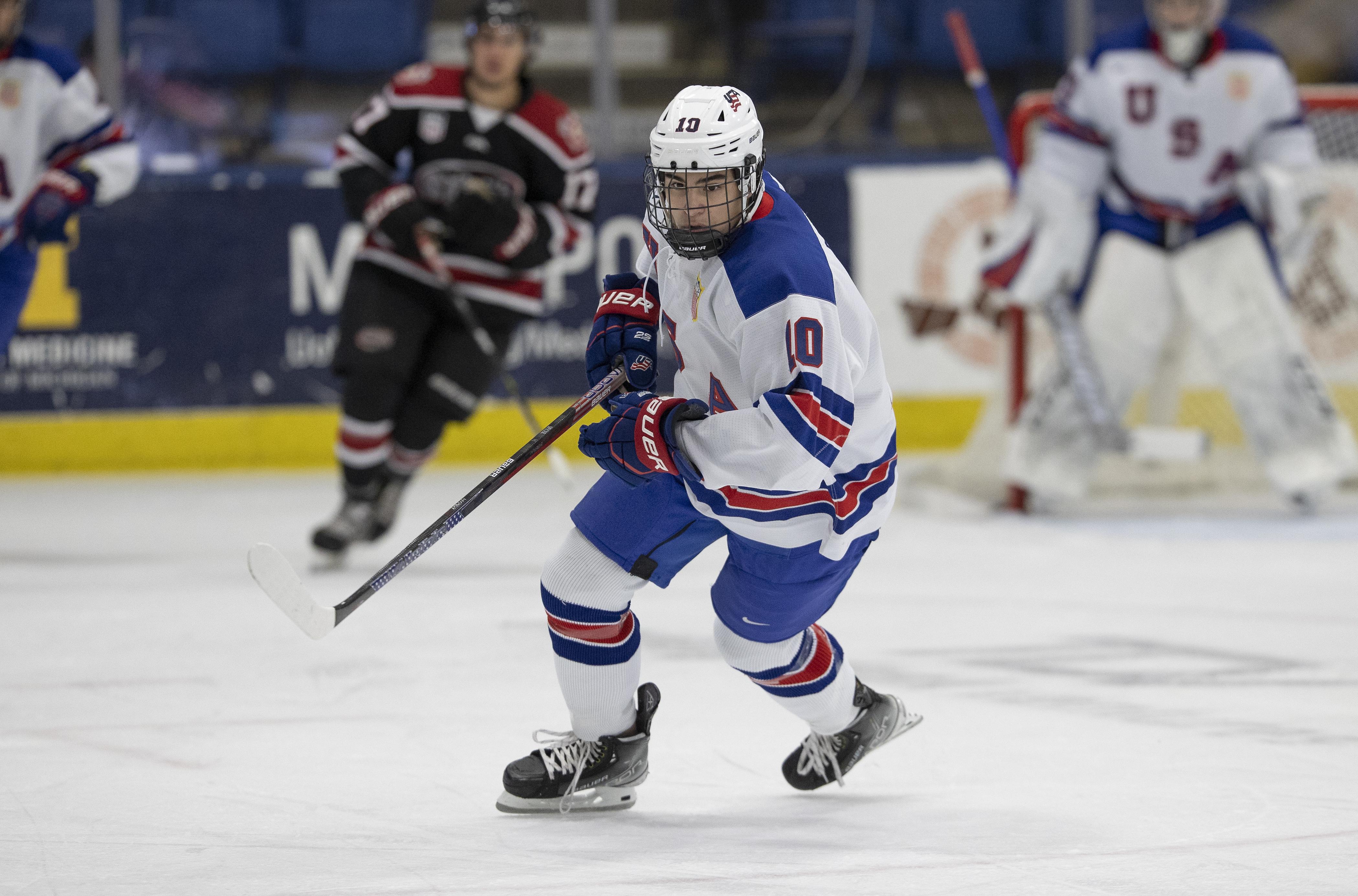 Joe Miller's second goal in two nights gave Chicago a 1-0 lead at 8:09 of the first period but USA's Cutter Gauthier (Scottsdale, Ariz.) tied it up with a ridiculous wrist-shot late in the first. Logan Cooley (Pittsburgh, Pa.) left the puck for Gauthier down the left wing where he wired a wicked wrister from outside the left faceoff circle in the far top corner to even the game. Jimmy Snuggerud (Chaska, Minn.) collected his ninth assist of the season with the secondary helper.

Only 18 seconds later, Spicer matched Miller with his second tally in less than 24 hours to put the U18s on top, 2-1. A great forecheck from Devin Kaplan (Bridgewater, N.J.) and Gabe Perreault (Hinsdale, Ill.) led to a Chicago turnover and Perreault flipped the loose puck to Spicer alone in front of the net, where he flicked it over the right shoulder of Nick Haas for the lead.

Spicer doubled the USA lead just over a minute into the middle frame when he tapped in a sweet pass from Perreault at the goalline. Kaplan led the pair into the offensive zone as the entire line connected for their second goal of the game to make it 3-1.

Less than three minutes later, Maddox Fleming (Rochester, Minn.) redirected a Seamus Casey (Fort Myers, Fla.) point shot for his first goal of the season to extend the lead to 4-1. Defenseman Tyler Duke (Strongsville, Ohio) wheeled behind the Chicago cage before he found Casey at the right point, whose soft wrist-shot ended up in the back of the net.

The home team made it five unanswered when Ryan Leonard (Amherst, Mass.) outskated the Steel defense and popped his shot over left shoulder of Haas. Frank Nazar III (Mount Clemens, Mich.) made the stretch-pass that set Leonard free, who scored in his second game with the U18s.

Dylan Silverstein (Calabasas, Calif.) started in net for the second straight game and turned aside 18 Steel attempts to pick up his fourth win of the year.

The Under-18 Team will return to its Kroger College Series next Friday evening when they take on the Adrian College Bulldogs at USA Hockey Arena before embarking on their first international trip of the season in Switzerland. Friday's game is set for 7:00 p.m. and tickets are available at USAHockeyNTDP.com/tix or by calling the USA Hockey Arena box office at 734-453-6400 x396.