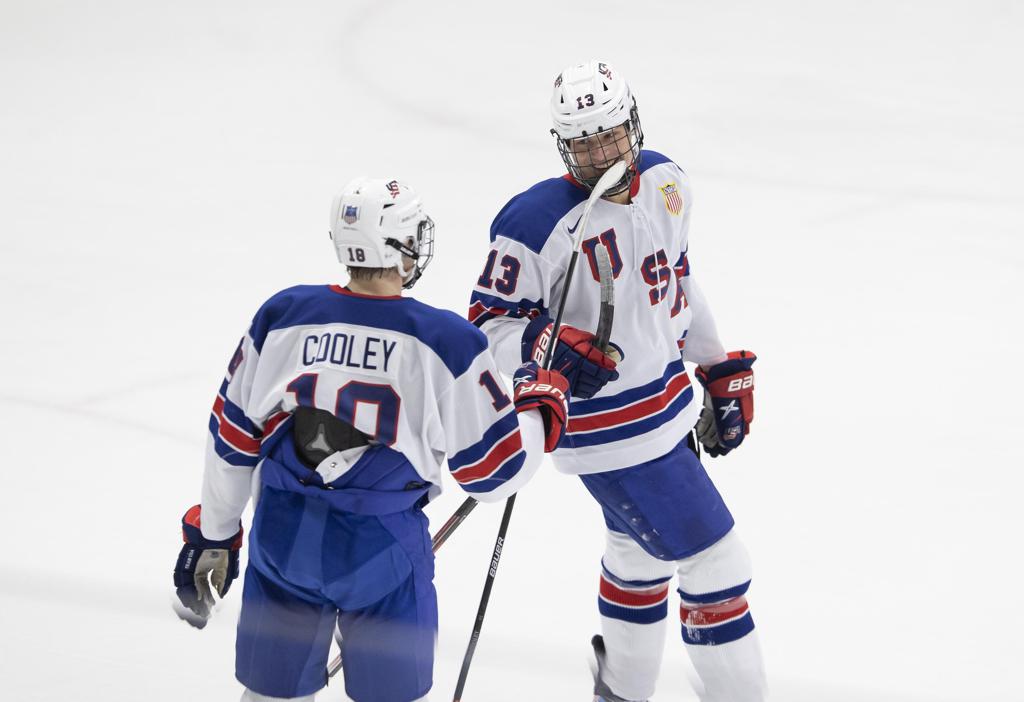 Team USA got on the board first off of a tremendous defensive-zone effort from Cooley. As Muskegon attempted to clear, Cooley lifted the stick of Tyler Young and stole possession of the puck. He wheeled around unabated to the net and slid his shot through the five-hole for a 1-0 advantage.

The lead was doubled just over a minute later when Rutger McGroarty (Lincoln, Neb.) finished off a pretty set-up from Cooley. Defenseman Charlie Leddy (Fairfield, Conn.) aimed his pass for McGroarty who played it off his skate to Cooley, attacking the slot. He found McGroarty on the left side of the cage where the future University of Michigan Wolverine hesitated and shifted the puck to his backhand before sliding it by goaltender Cameron Korpi for a 2-0 USA lead.

The U18s made it three in a row off the stick of Devin Kaplan (Bridgewater, N.J.) on a second-chance opportunity. Frank Nazar III (Mount Clemens, Mich.) drove the play down the right wing and fired the first shot on net. The loose puck deflected through a plethora of 'Jacks players before Kaplan found it and put a shot on net for his second score of the season.

Quinn Hutson, older brother of Team USA defenseman Lane, put Muskegon on the board at 9:24 of the middle period with a quick shot over the shoulder of USA's netminder, Tyler Muszelik (Long Valley, N.J.).

Team USA dumped in a trio of goals in the period's final five minutes to take a commanding 6-1 lead after 40 minutes of action. The first of the flurry came on a Cruz Lucius (Grant, Minn.) power-play tally. Lane Hutson (North Barrington, Ill.) set up Cooley for a one-timer blast from the right wing that was rejected, but Lucius followed it up on a second-chance opportunity for his third score of the season.

Team USA converted off another Lumberjacks turnover to make it 5-1 less than a minute later. Seamus Powell (Marcellus, N.Y.) forced the change of possession and he fired a deep pass for Hejduk, who roofed his wrist-shot to extend the lead.

Brady Berard (East Greenwich, R.I.) collected his first tally of the season with under a minute to play in the middle frame. Behind the cage, Maddox Fleming (Rochester, Minn.) fed Hejduk at the right wing, where he centered the rubber on cage. Standing at the far post, Berard tapped in for the 6-1 advantage.

Both sides added a pair of goals in the third period, the first from Tyler Dunbar of the Lumberjacks at 1:54.

Cooley followed with his second of the night when he spun a backhand shot in past the halfway mark, assisted by Lucius and McGroarty.

After Muskegon made it 7-3, defenseman Kaden Muir (Manchester, N.H.) capped the night's scoring with a firm wrister from the right faceoff circle on the man advantage. Powell added his second assist and Hejduk recorded his third point of the game with the helpers on the goal.

Muszelik finished the night with 32 saves in net for the U18s, highlighted by a bevy of saves off Lumberjacks' odd-man rushes throughout the contest.

The U18s will head to the Upper Peninsula as they return to the Kroger College Series with games at Michigan Tech and Northern Michigan next weekend.