The U18s Skate Past Notre Dame in Tight Battle, 4-3 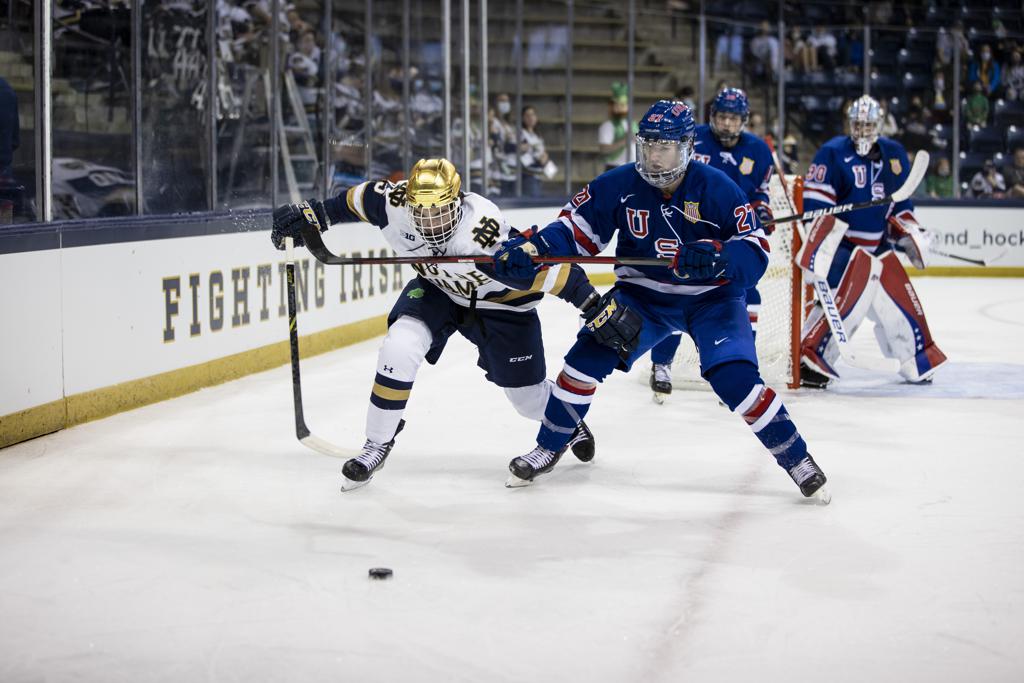 Team USA forward Isaac Howard (Hudson, Wis.) continued his strong start to the season when he netted first to give the U18s a lead 83 seconds into the game. Devin Kaplan (Bridgewater, N.J.) had the puck on a 3-on-2 break and fed Howard who fired his short-side shot over the glove of Irish goalie Ryan Bischel for a 1-0 lead.

Notre Dame answered when NTDP alum Justin Janicke found the back of the net on his first collegiate shot attempt. Spencer Stastney, another product of the NTDP, picked up the assist on the tying goal.

Team USA restored the lead just past the halfway mark of the opening period off the stick of Cutter Gauthier (Scottsdale, Ariz.). Notre Dame, playing in its first game of the year, had a costly defensive-zone turnover that gave the puck to Jimmy Snuggerud (Chaska, Minn.). Snuggerud slid a feed for Gauthier and he delivered his fourth marker of the season to make it a 2-1 game.

Future Irish forward Logan Cooley (Pittsburgh, Pa.) extended the Team USA lead to 3-1 with his first goal of the season at 11:18 of the middle frame. Cooley entered the offensive zone, stickhandled through the defense and ripped a wrister in the high-right corner. Rutger McGroarty (Lincoln, Neb.) assisted on the tally.

Jimmy Snuggerud converted on a power play to give the U18s a 4-1 lead  with just over a minute to play in the second. Howard set him up from the left face-off dot, where Snuggerud's one-timer scooted through the legs of new Irish netminder, Matt Galajda. Seamus Casey (Fort Myers, Fla.) collected the secondary helper for his fourth point of the season.

Notre Dame added its second of the night to bring the score back to 4-2 in the third period. Muszelik made the first save which produced a scrum in front of the cage. The puck got loose and Solag Backich knocked it in at the far post.

Backich got his second of the night on a redirection goal in front of the net with 7:18 to play in regulation.

Muszelik shut the door on a frenzy of Irish chances late in the final period. A pair of his best were against NTDP alums, first with a pad save on Ryder Rolston and then a stop of a Hunter Strand redirection chance in the same sequence. Muszelik finished with 39 stops on the night, a season-high.

The U18s return to the ice next weekend when they host the Muskegon Lumberjacks Saturday night at USA Hockey Arena.