U17s Fall To Youngstown In Game One Of Weekend Series

Perreault notches a pair for the U17s 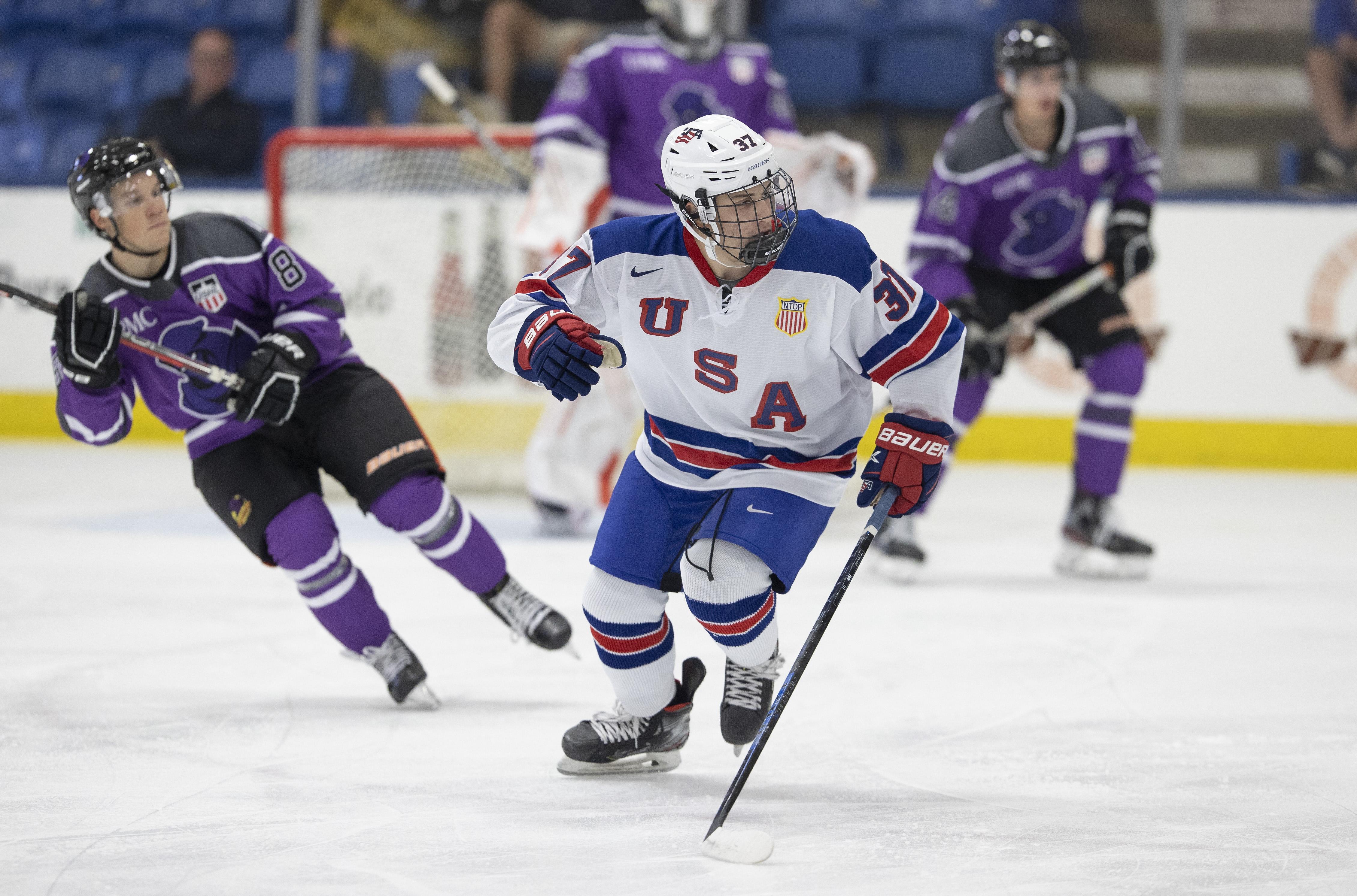 PLYMOUTH, Mich. -- Gabe Perreault (Hinsdale, Ill.) scored a pair of goals to tie him for the team lead, but the U.S. National Under-17 Team dropped, 7-4, to the Youngstown Phantoms in their 2021-22 home opener Friday night at USA Hockey Arena.

Both teams came out firing as a combined three goals were scored in the game's opening minute. Youngstown took an early 2-0 lead with a pair of goals in the first 35 seconds. The first came from Kyle Bettens who tapped the puck in from within the crease, while Carter Rose netted their second from the left point.

Moments later, Team USA went coast-to-coast starting with Brady Cleveland (Wausau, Wis.) and Austin Burnevik (Blaine, Minn.) in their defensive zone. Burnevik found Oliver Moore (Mounds View, Minn.) at the blue line, who went behind the net for a wraparound goal to put Team USA on the board.

Just past the halfway mark of the period, Youngstown’s Kenta Isogai found the back of the net off a scramble between the two teams in front of the net.

Team USA answered the Phantoms goal with a power-play marker to bring the lead back to one. From the right point, Cleveland's shot redirected off the stick of Carter Slaggert (South Bend, Ind.) with 10 seconds left in the period to make it a 3-2 contest.

Team USA kicked off the middle frame with another early goal, 1:59 into the period. A give-and-go play between Perreault and Moore created an open shot for Moore from the left faceoff circle. The shot deflected off the pads of Phantoms netminder, Owen Bartoszkiewcz, but Perreault was there to net the rebound chance.

With the game tied, 3-3, the Phantoms’ Adam Ingram found himself in a one-on-one situation and slipped the puck in the net to take back the lead for Youngstown.

Youngstown’s lead lasted only a few minutes thanks to Perreault, who netted his second goal of the night, just over the halfway mark of the game.

Before the period's end, the Phantoms took back the advantage on a pair of goals. Jaden Grant led the charge, scoring with 8:49 left in the period. Ingram, shortly after, picked up his second of the night to give Youngstown a 6-4 lead.

The final period saw fewer scoring chances from both sides of the ice. With 4:23 remaining in the game, Grant scored his second goal on the night to seal the win for Youngstown.

Trey Augustine (South Lyon, Mich.) started in net for the U17s and made 27 saves in a busy 40 minutes of action. Michael Chambre (Fort Myers, Fla.) played the third and turned aside 15 of 16 Phantoms attempts.

The Under-17 Team makes the trip to Youngstown tomorrow for the back end of their home-and-home weekend series. Puck drop is set for 7:00 p.m. ET at Covelli Centre.