Silverstein turns aside 27 shots in second win of the season 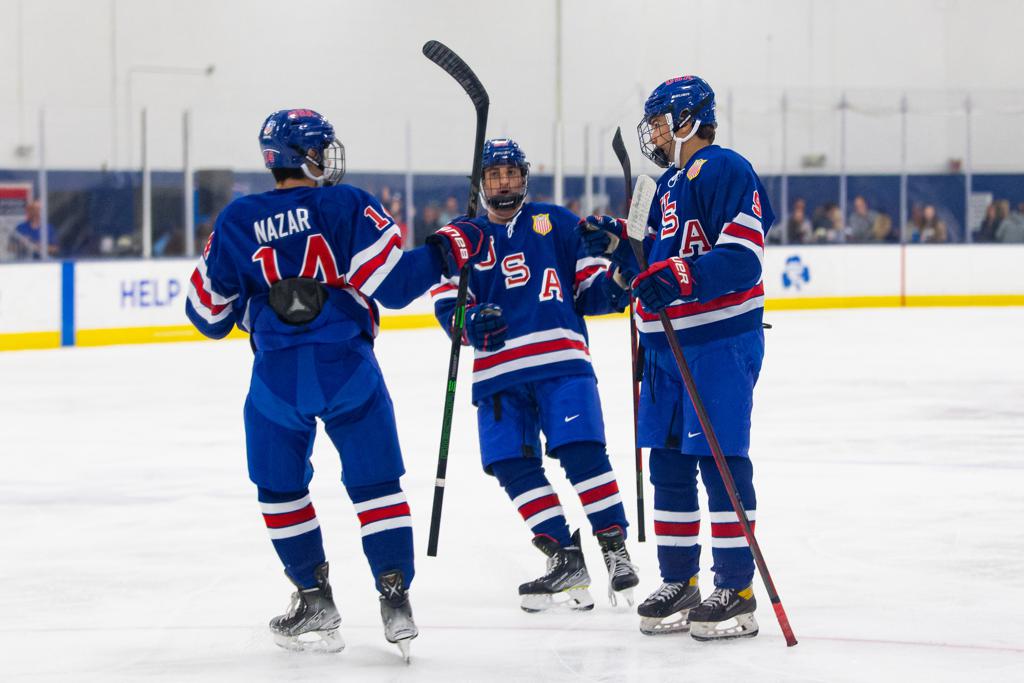 CRANBERRY TOWNSHIP, Pa. - The U.S. National Under-18 Team used goals from four different scorers and a great performance in net from Dylan Silverstein (Calabasas, Calif.) to skate past the Sioux City Musketeers, 4-2, Saturday afternoon at the USHL Fall Classic.

Sioux City's Ben Steeves tallied the first goal of the game to put the Musketeers up 1-0. Nick Pierre put the initial shot on net from the right wing which Silverstein turned aside, but Steeves found the rebound and pushed it in for a 1-0  lead, 3:52 into the game.

Over 20 minutes later, Team USA found the tying goal when Cutter Gauther (Scottsale, Ariz.) waited out the goalie before pushing a shot in for his second tally of the year. Logan Cooley (Pittsburgh, Pa.) cycled a puck for Isaac Howard (Hudson, Wis.), who found Gauthier in alone at the goal crease. The 6-foot-3 forward hesitated to force Musketeers goalie Alex Tracy to guess one way, then dragged the puck around Tracy and slid it in to tie the game at 7:35 of the second.

The U18s took their first lead of the afternoon with just over two minutes to play in the second off the stick of Frank Nazar III (Mount Clemens, Mich.). Defenseman Ryan Chesley (Mahtomedi, Minn.) started the beautiful passing display, going from right point to Jimmy Snuggerud (Chaska, Minn.) at the right wing. Snuggerud wasted no time with the puck on his stick, sending a cross-ice feed to Nazar who slammed his one-timer home for his third goal in three games and a 2-1 Team USA lead.

The Musketeers came back and tied the game at 2-2 just 34 seconds into the third period when Dylan James finished off a 3-on-2 odd-man rush.

Cole Spicer (Grand Forks, N.D.) restored the Team USA lead with his second goal in as many games 4:05 into the third. He and linemate Devin Kaplan (Bridgewater, N.J.) applied the forecheck and Kaplan collected the free puck behind the net. He drew a defenseman towards him before dishing his pass to Spicer back-door, who received and fired for the 3-2 lead.

Defenseman Seamus Casey (Fort Myers, Fla.) netted a late power-play marker to cap the scoring with less than two minutes to play in regulation when he ripped a wrister from the top of the point that went over the shoulder of Tracy for a 4-2 lead. Howard and Snuggerud set up the final goal of the game.

Silverstein was sturdy in net for Team USA and finished the game with 27 saves for his second win of the season.

The U18s are back in action at the Fall Classic tomorrow afternoon when they take on the Fargo Force. Puck drop is slated for 2:00 p.m. ET from the UPMC Lemieux Sports Complex and will be streamed live on HockeyTV.com.