Hejduk adds a pair of goals for U18s in charity game 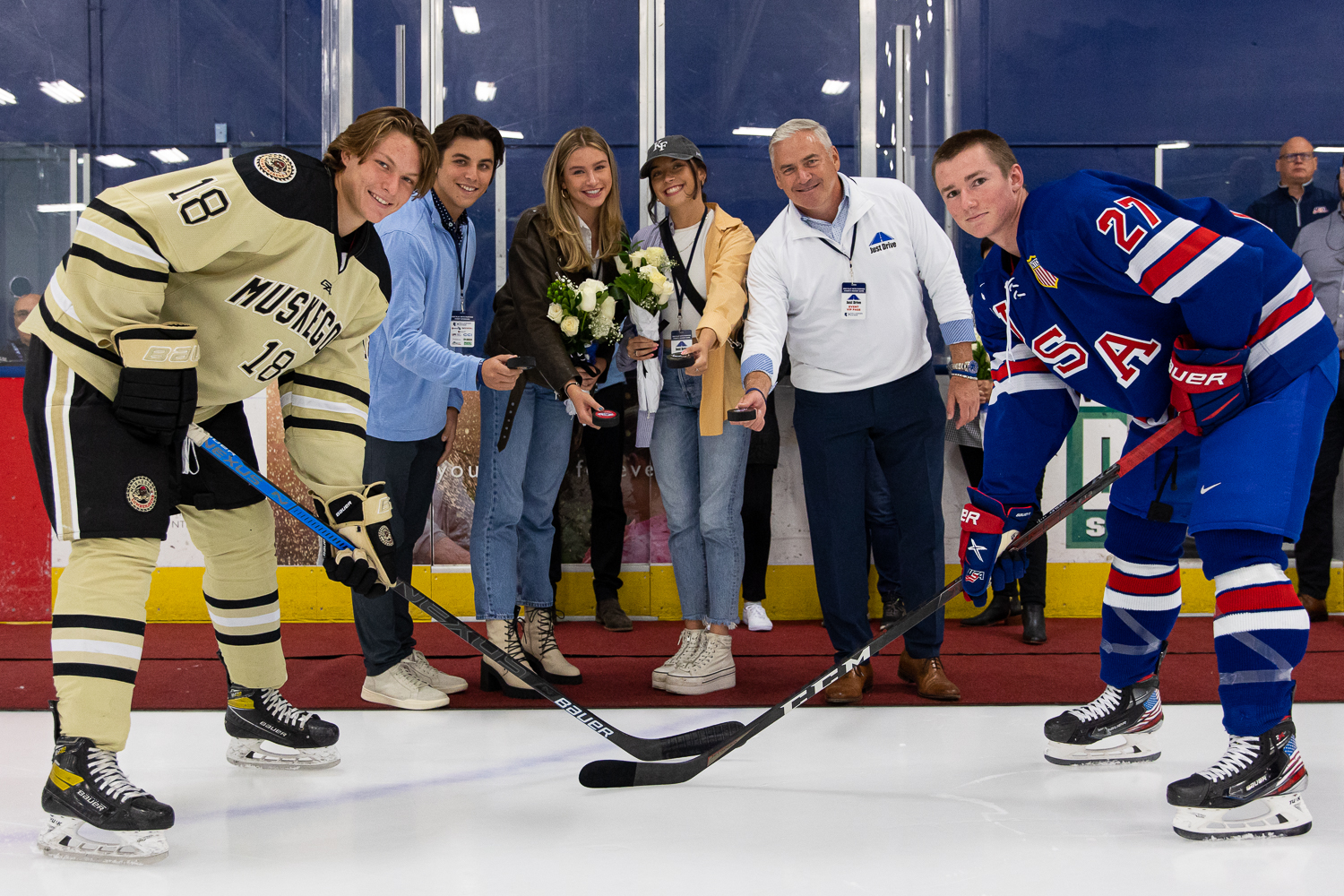 PLYMOUTH, Mich. - The U.S. National Under-18 Team skated to an 8-5 victory over the Muskegon Lumberjacks behind a hat-trick from Rutger McGroarty (Lincoln, Neb.) and a pair of goals from Marek Hejduk (Parker, Colo). Saturday evening at the Mitchel Kiefer Memorial Rink at USA Hockey Arena.

The game marked the 4th Annual Play With Purpose charity game as the night raised money and awareness against distracted driving on the eve of the fifth anniversary of Mitchel Kiefer's passing due to a distracted driver.

McGroarty potted his first just 26 seconds into the game when he slammed home a feed in front of the net from Cutter Gauthier (Scottsdale, Ariz.). Devin Kaplan (Bridgewater, N.J.) continued his strong start to the season with a helper on the goal.

Hejduk collected his first of the night to make it a 2-0 game less than three minutes later. Maddox Fleming (Rochester, Minn.) and Hejduk combined to win a puck battle in the offensive zone and Hejduk spun and fired his wrister past Jan Skorpik to double the lead.

McGroarty connected again just shy of seven minutes into regulation with a top-shelf shot over Skorpik's glove-side. Gauthier won a faceoff to Lane Hutson (North Barrington, Ill.) who fed a pass off the boards to McGroarty entering the offensive zone. He tried to feed a pass cross-ice that got stuck in the defenseman's skates, collected again and fired for a 3-0 lead.

Frank Nazar III (Mount Clemens, Mich.)  wasted no time making it 4-0 with a slick breakaway goal. Isaac Howard (Hudson, Wis.) found a loose puck in the defensive zone and sent a long pass to a streaking Nazar behind the defense. The Michigan native went forehand-backhand-forehand for his second score of the season.

Muskegon's Kevin Lindemann put the Lumberjacks on the board with a power-play marker before the close of the opening period and Joey Larson netted the first goal of the second to make it a 4-2 contest.

After Muskegon's Quinn Hutson, older brother of the U18s' Lane, answered with one for the 'Jacks, Hejduk restored the three-goal advantage with a great hesitation move at the net before lifting his shot over Cameron Korpi. Hejduk was set up by Hutson and Brady Berard (East Greenwich, R.I.) on the goal that made it 6-3.

McGroarty completed the hat-trick on a solo effort at 14:14 of the middle frame. He picked up the puck in the d-zone and sprinted down the right wing before dragging the defenseman and sliding his shot home for his third of the night.

Defenseman Ryan Chesley (Mahtomedi, Minn.) capped Team USA's scoring with just under two minutes to play in the second with the team's second PPG of the night.  Cole Spicer (Grand Forks, N.D.) fed Nazar in the slot for the initial shot, which Korpi saved, but the puck rebounded right to Chesley at the left wing. The University of Minnesota commit wound up for a big put-back goal to make it 8-3 after 40 minutes.

The Lumberjacks' Philip Tresca and Benny Barnes found the back of the net in the final frame for the 8-5 final.

Tyler Muszelik (Long Valley, N.J.) started in net for Team USA and picked up the win, playing the first two periods of the game, with 14 saves. Dylan Silverstein (Calabasas, Calif.) relieved him in the third and made five stops to finish the game.

The U18s are back in action next weekend when they travel to Pittsburgh to play in the USHL Fall Classic on Saturday and Sunday.