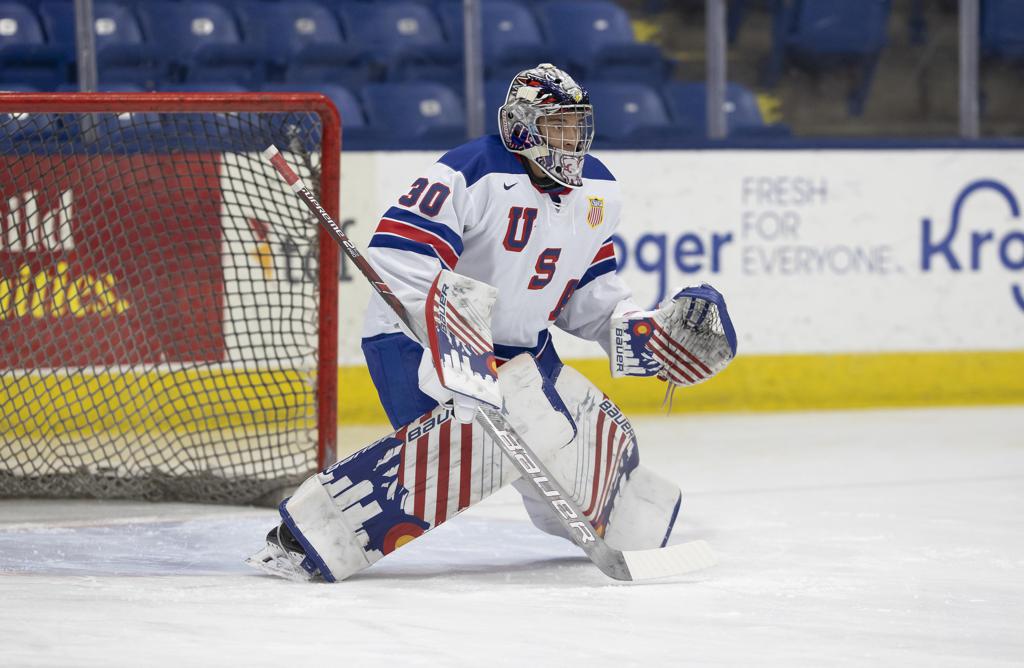 GENEVA, Ill. - Chaz Lucius (Grant, Minn.) tied the game with 75 seconds to play in regulation and Roman Schmidt (Midland, Mich.) scored the lone shootout goal as the U.S. National Under-18 Team came back to defeat the league-leading Chicago Steel, 4-3 in a shootout, Saturday night at Fox Valley Ice Arena.

Team USA got out to a fast start with two goals in the opening 74 seconds of the contest. Andre Gasseau (Garden Grove, Calif.) lit the lamp just 27 seconds in with a quick wrist shot from the inside of the left faceoff circle. Rutger McGroarty (Lincoln, Neb.) kept the puck in the offensive zone to Aidan Hreschuk (Long Beach, Calif.) down the left wing. The defenseman found Gasseau with a quick pass who snapped his shot top shelf for a 1-0 lead.

Pastujov doubled the U18 advantage when he banged in a rebound attempt in front of the net less than a minute later. Schmidt took the initial shot from the right point and Dylan Duke (Strongsville, Ohio) put a second opportunity on cage. Pastujov finally connected on Team USA's third shot of the sequence as he tallied his 22nd goal of the season.

A pair of NTDP alums evened the score for Chicago as Sean Farrell put the Steel in the goal column with a shorthanded marker less than five minutes into the game. Erik Middendorf evened the score at 2-2 with the lone goal of the second period.

Adam Fantilli gave Chicago its only lead of the evening just shy of the halfway mark of the third but Lucius continued his ridiculous goal pace to force extra time. The University of Minnesota commit fed Logan Cooley (West Mifflin, Pa.) into the offensive zone. The U17 forward used some great edge-word to shield the defense and drop a pass back to Lucius, who beat Simon Latkoczy with a quick snipe glove-side. The score was Lucius' 11th in nine games this season.

After a scoreless 3-on-3 session in overtime, the two teams went to a shootout for the second straight matchup. And for the second time in those two games, Schmidt was the only skater to score to give Team USA the extra point.

Kaidan Mbereko (Aspen, Colo.) picked up the win in net for the U18s as he turned aside 29 shots from the Steel as well as all three shootout attempts from Chicago. Mbereko's record now sits at an extremely impressive 11-3-0-2 in 22 games played.

The U18s are back in action Wednesday evening when they play host to the Muskegon Lumberjacks at USA Hockey Arena. Tickets are available at USAHockeyNTDP.com/tix or by calling the USA Hockey Arena box office at 734-453-6400.