U18s Take Back and Forth Battle With Steel, 5-4 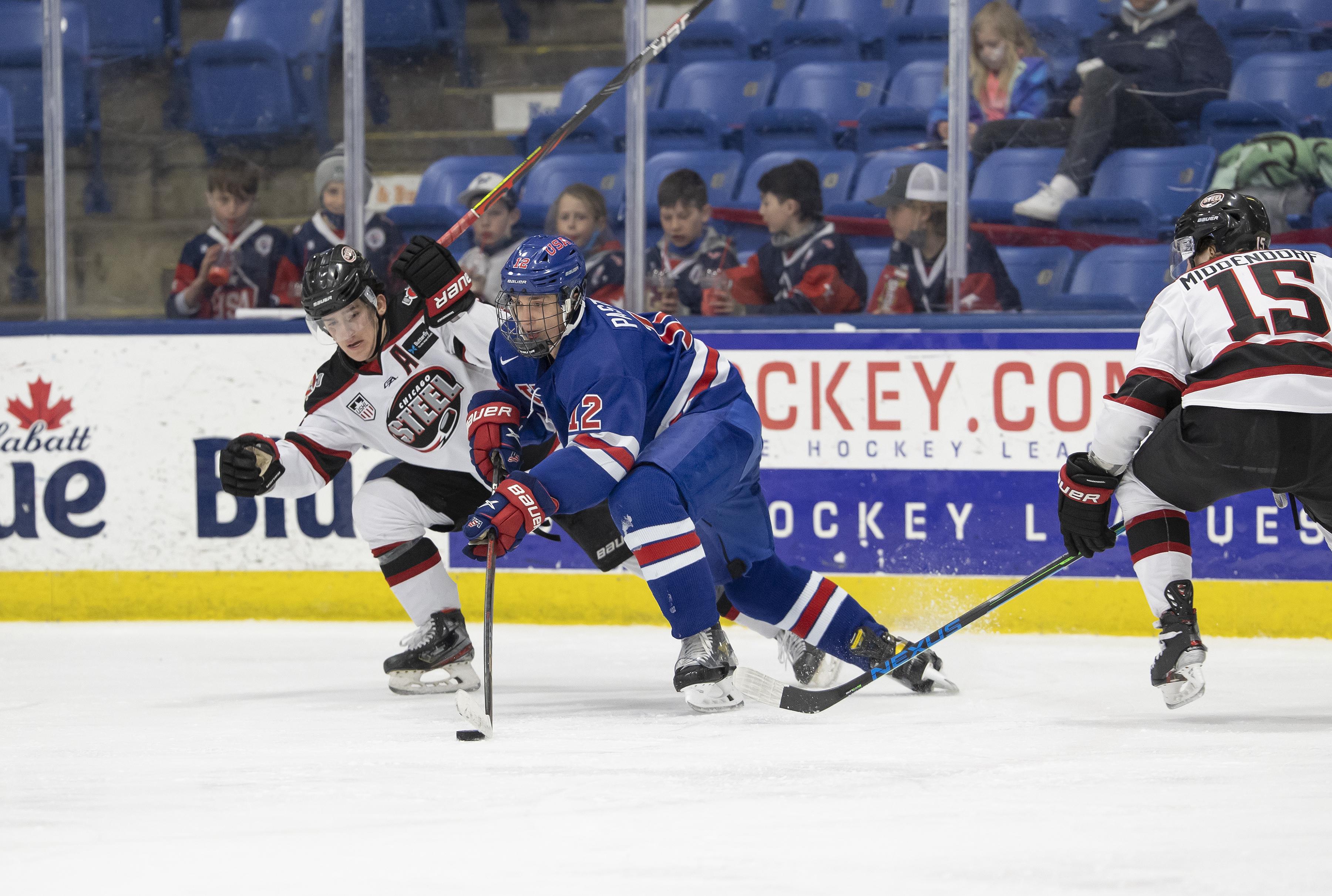 PLYMOUTH, Mich. - Sasha Pastujov (Bradenton, Fla.) recorded a point for the 18th straight game as the U.S. National Under-18 Team held on to beat the league-leading Chicago Steel, 5-4 in a shootout, Sunday afternoon at USA Hockey Arena.

The USHL's leading scorer, Matt Coronato, opened the scoring for Chicago but that was the only lead they'd see all game.

Frank Nazar III (Mount Clemens, Mich.) knotted the game up for the U18s when he found the back of the net off a nice set-up in front of the net from Jack Devine (Glencoe, Ill.). Defenseman Ty Murchison (Corona, Calif.) spurred the two forwards to a 2-on-1 with a nice offensive-zone entry pass and collected the secondary helper on the 1-1 goal.

Chaz Lucius (Grant, Minn.) continue his impressive start to the season as he netted his sixth goal in six games to give Team USA a 2-1 lead at 2:22 of the second period. Lucius led a give-and-go with Isaac Howard (Hudson, Wis.) who returned a pass for a Lucius one-timer and the U18s first lead of the night. Tyler Boucher (Haddonfield, N.J.), making his return to the lineup, picked up a helper on the score to give him 13 points in 12 games this season.

Chicago's Mackie Samoskevich tied the game at 2-2, but Team USA found a pair of goals to take a 4-2 lead after two periods. Sean Behrens (Barrington, Ill.) restored the lead with a rocket of a shot from the right circle on the power play.  He was assisted by Lucius and Luke Hughes (Canton, Mich.) at 13:12 of the second period.

Hrescuk doubled the Team USA lead less than three minutes later with a heavy wrister of his own on an offensive-zone rush. Hughes picked up his second point of the night with a helper and Pastujov picked up an assist to set the program's all-time point streak mark.

The Steel scored twice in the final period of regulation to force the game to overtime. After neither side netted in the five-minute session, the contest concluded with a shootout.

For the second straight game, only one skater shored in the shootout. This time, it was Team USA's Roman Schmidt (Midland, Mich.) who lit the lamp with a forehand deke before beating Simon Latkoczy blocker side for the win.

Gibson Homer (Grand Rapids, Mich.) turned aside all three Steel shots in the shootout and made 28 saves during regulation to pick up his 18th win of the season.

The U18s are back in action Wednesday evening as they host the Youngstown Phantoms at USA Hockey Arena. Puck drop is scheduled for 7:00 p.m. and tickets are available at USAHockeyNTDP.com/tix or by calling 734-453-6400.