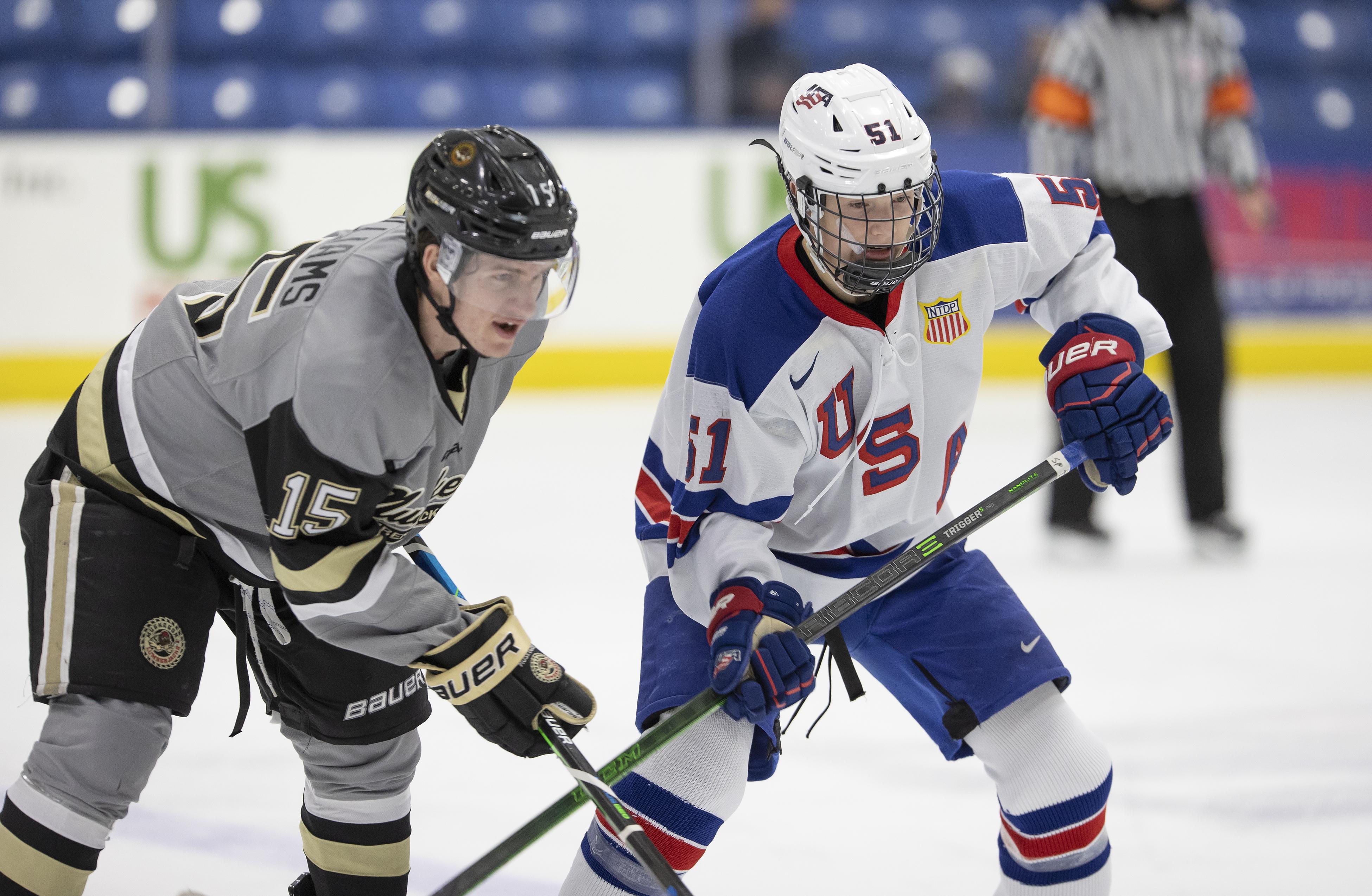 MUSKEGON, Mich. – In a back-and-forth battle, the U.S. National Under-17 Team fell, 3-2, to the Muskegon Lumberjacks in overtime Saturday evening at Mercy Health Arena.

Cruz Lucius (Grant, Minn.) continued his stellar scoring streak to get things rolling for Team USA, intercepting a breakout pass by a Muskegon defender and firing a wrister high over the shoulder of goaltender Jan Skorpik to net his fourth goal in three contests.

The Lumberjacks responded just over three minutes later when Muskegon's Tanner Kelly found the back of the net to tie the game at 1-1.

The U.S. had a pair of chances on the counterattack, but could not convert, and Cameron Berg scored at the 15 minute mark of the opening frame to give the Lumberjacks a 2-1 advantage heading into the first intermission.

Team USA upped the ante in the second period, outshooting the Lumberjacks, 12-9, throughout the frame.

Isaac Howard (Hudson, Wis.) tied the game on the penalty kill, collecting a breakout pass from Charlie Leddy (Fairfield,  Conn.) and slotting a feed to Lucius before weaving the return pass in behind Skorpik for the shorthanded score.

Howard currently sits alone atop the USHL's goal-scoring list among rookies with 13 tallies.

The U.S. outshot the Jacks, 10-8, in the third period, and had several goal-scoring chances but Muskegon goalie Nate Reid held strong in the net.

Muskegon nearly scored the game-winner in the final minutes of regulation when Cristophe Tellier earned a breakaway chance, but Tyler Muszelik (Long Valley, N.J.) made the initial stop, and Lane Hutson (Barrington, Ill.) managed to block Dylan Wendt's rebound shot from the crease to keep it a 2-2 game and force overtime.

The Lumberjacks scored with 29 seconds remaining in the extra frame to earn a 3-2 victory.

Muszelik made 27 saves in the loss.

The U17s return to action Sunday evening when they host the Chicago Steel as part of the NTDP's doubleheader at USA Hockey Arena. Puck drop is slated for 7 p.m. ET following the conclusion of the U18s' 3 p.m. contest against Green Bay.

Fans looking to purchase tickets for both contests on Sunday can visit USAHockeyNTDP.com/tix or call 734-453-6400 x 396.