St. Louis and Hreschuk net three points each in win 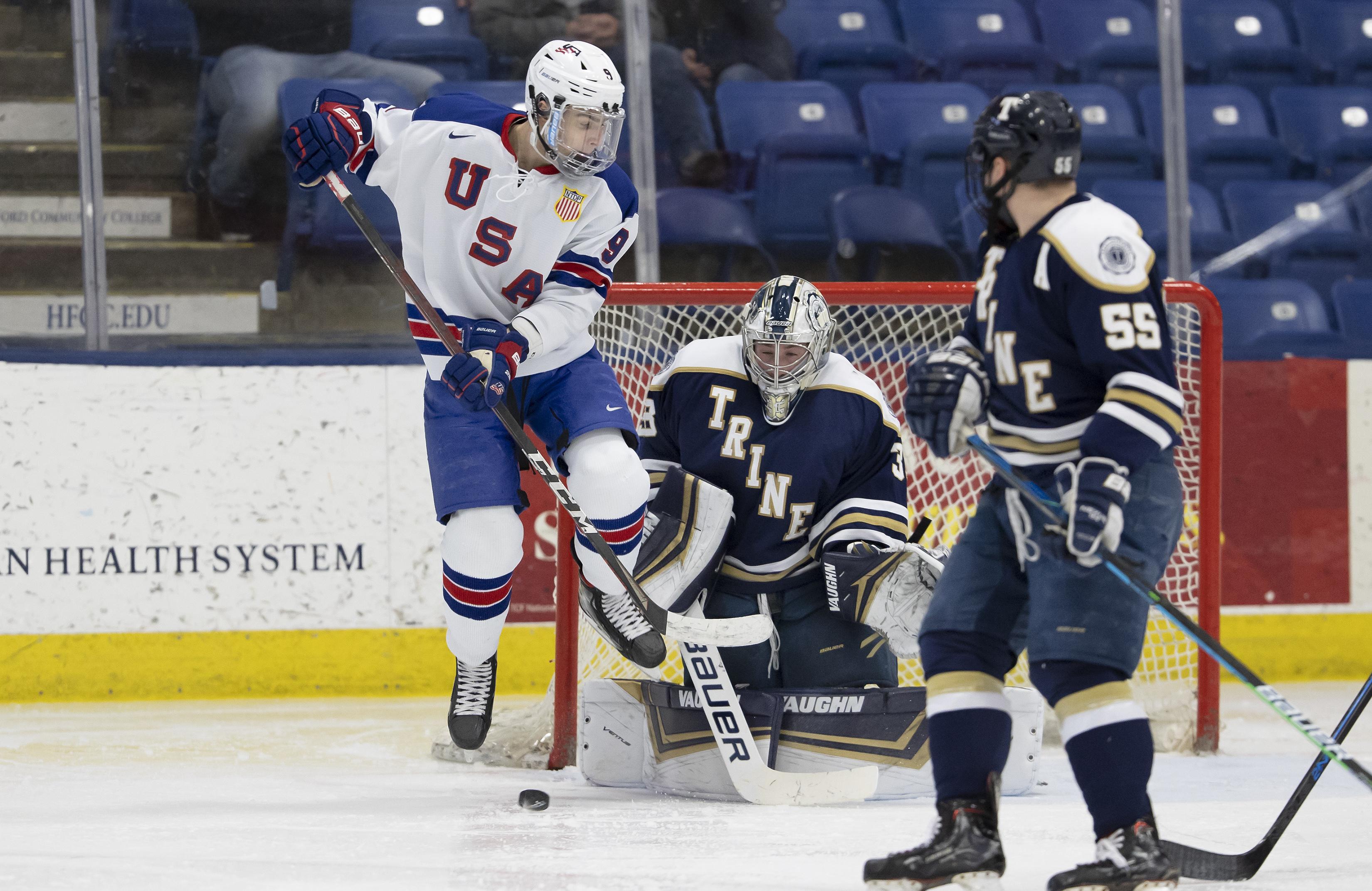 PLYMOUTH, Mich. - Five third-period goals spurred the U.S. National Under-18 Team to an 8-1 win over the Trine University Thunder on Tuesday night at USA Hockey Arena.

The U18s have now won seven games in a row and 11 of their last 12 matchups, dating back to December 12 at Air Force.

Team USA scored first when Justin Janicke (Maple Grove, Minn.) chased down a loose puck, charged the left wing and fed Devin Kaplan (Bridgewater, N.J.) a perfect pass for his ninth goal of the season at 3:07 of the first.

Trine tied the game up halfway through the first period, but Ty Gallagher (Clarkston, Mich.) restored the U18s  lead on a power-play goal with under a minute left in the first. Ryan St. Louis (Riverside, Conn.) found Gallagher  with a cross-ice pass who ripped a wrist shot from the left faceoff circle. Aidan Hreschuk (Long Beach, Calif.) picked up the secondary assist, his first of three helpers on the night.

U17 call-up Charlie Stramel (Rosemount, Minn.) netted the lone goal  in the second period with a deflection off a Ty Murchison (Corona, Calif.) shot from the left point with under a minute remaining. Gallagher earned himself a multi-point night with an assist on the goal to make it 3-1.

The U18s poured it on with five goals in the final frame. Liam Gilmartin (Falls Church, Va.) potted his fourth goal of the season on a power play when he tapped in a feed from St. Louis. Hreschuk picked up his second power-play point with an assist.

Stramel delivered his second score off a redirection as he tipped in a Kaplan shot at 10:55 of the third. Hreschuk was credited with his third assist on the score to make it 5-1.

St. Louis and Andre Gasseau (Garden Grove, Calif.) added a pair of goals in a 17-second span with close-range shots. Dylan Duke (Strongsville, Ohio) netted his 14th marker of the year to close the scoring with less than two minutes to play in regulation.

The U18 goaltenders split the game in net. Kaidan Mbereko (Aspen, Colo.) made four saves in the opening period to push his record to 8-2-0 on the season. Gibson Homer (Grand Rapids, Mich.) played the final 40 minutes as he turned aside all seven shots he faced.

The Under-18 Team is back in action Friday night when they play host to the Milwaukee School of Engineering at USA Hockey Arena. Limited tickets are still available at USAHockeyNTDP.com/tix.