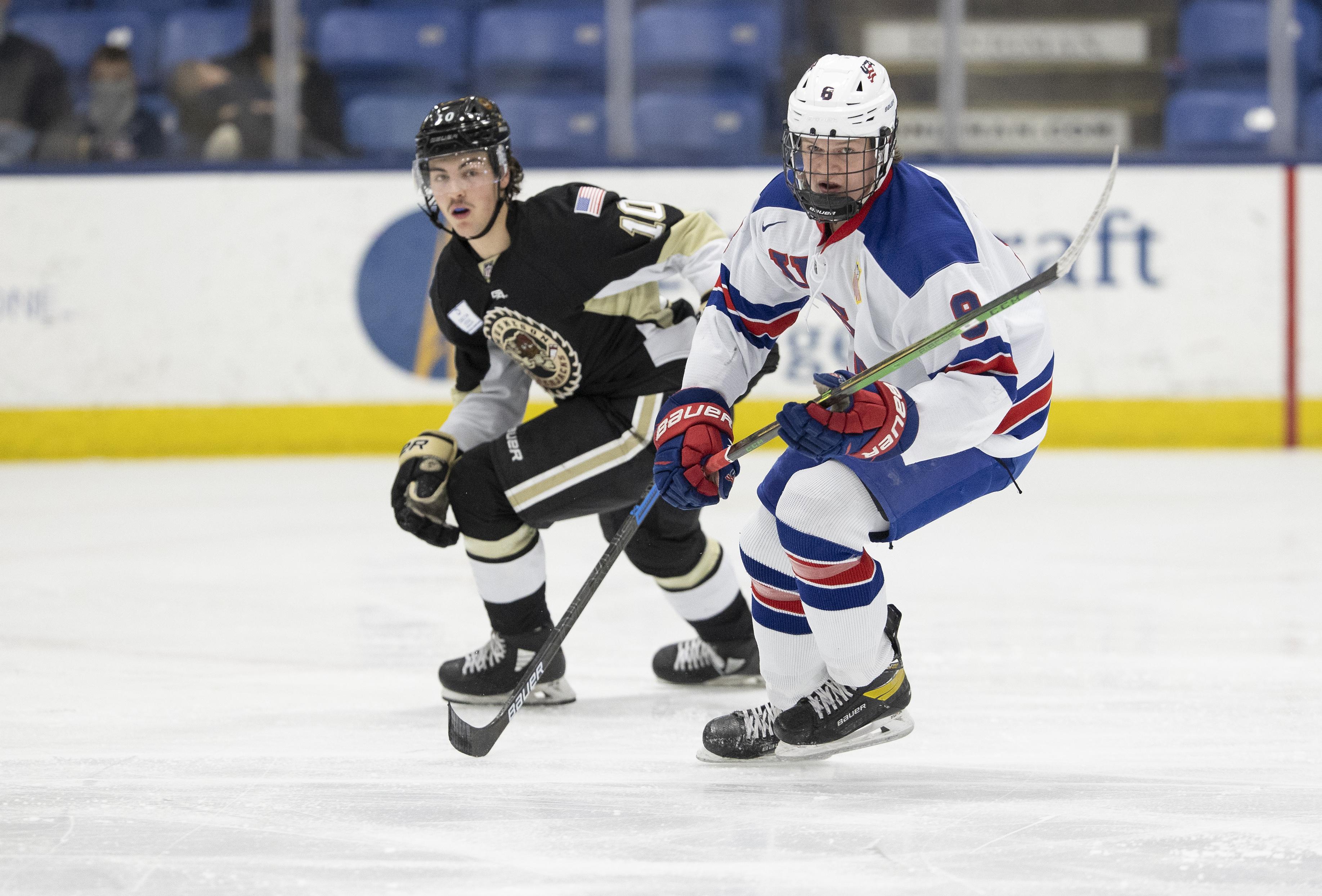 PLYMOUTH, Mich. - Team USA scored four times in the game's first six minutes to lead the U.S. National Under-18 Team to a 7-3 win over the Muskegon Lumberjacks Monday evening at USA Hockey Arena.

Dylan Duke (Strongsville, Ohio) opened the scoring 84 seconds into the game when he slammed home a Luke Hughes (Canton, Mich.) cross-crease feed. Jack Hughes (Westwood, Mass.) found Luke at the right point where he shimmied a defender and drove towards the net before he found Duke for his 13th goal of the season.

Red Savage (Scottsdale, Ariz.) followed with his 10th goal at 3:15 of the first when he finished off a pretty tic-tac-toe setup from Jeremy Wilmer (Rockville Centre, N.Y.) and Aidan Hreschuk (Long Beach, Calif.)

Forward Caden Brown (St. Louis, Mo.) made it 3-0 just over a minute later when he completed a rebound chance in front of the net. Luke Hughes took the initial shot while Wilmer got a piece of the puck before Brown buried his attempt.

U17 call-up Frank Nazar III (Mount Clemens, Mich.) tipped in a Luke Hughes shot to increase the U18 advantage to 4-0 at 5:48 of the opening period. Hreschuk collected his second point of the night with an assist.

Fellow call-up Logan Cooley (West Mifflin, Pa.) collected his first U18 goal after a scrum in front of the net. Ryan Chesley (Mahtomedi, Minn.), another U17, fired a shot from the right point that bounced off the boards and in front of the net. Cooley jammed it home to make it 5-0 and Nazar picked up a helper on the goal.

Cristophe Tellier got Muskegon on the board but Team USA's Justin Janicke (Maple Grove, Minn.) answered with a shorthanded marker to make it 6-1 before the break. The play started with an Ethan Straky (Ormond Beach, Fla.) blocked shot that Andre Gasseau (Garden Grove, Calif.) corralled and fed Janicke who finished the breakaway attempt with a backhand shot.

After Muskegon started the third period with a goal, Luke Hughes capped the Team USA scoring with a rocket of a slap-shot from the left point to secure a four-point night for the defenseman. Janicke and Liam Gilmartin (Falls Church, Va.) collected helpers on the team's final score.

The 'Jacks Tanner Kelly tallied late for the 7-3 final.

U18 netminder Gibson Homer (Grand Rapids, Mich.) turned aside 16 Muskegon shots as he hit double-digits in the win column with his 10th of the season. Homer has won each of his last five starts in net.

The U18s are back in action tomorrow night when they host the Trine University (Ind.) Thunder. Puck drop is slated for 7:00 p.m. from USA Hockey Arena and tickets are still available at USAHockeyNTDP.com/tix.