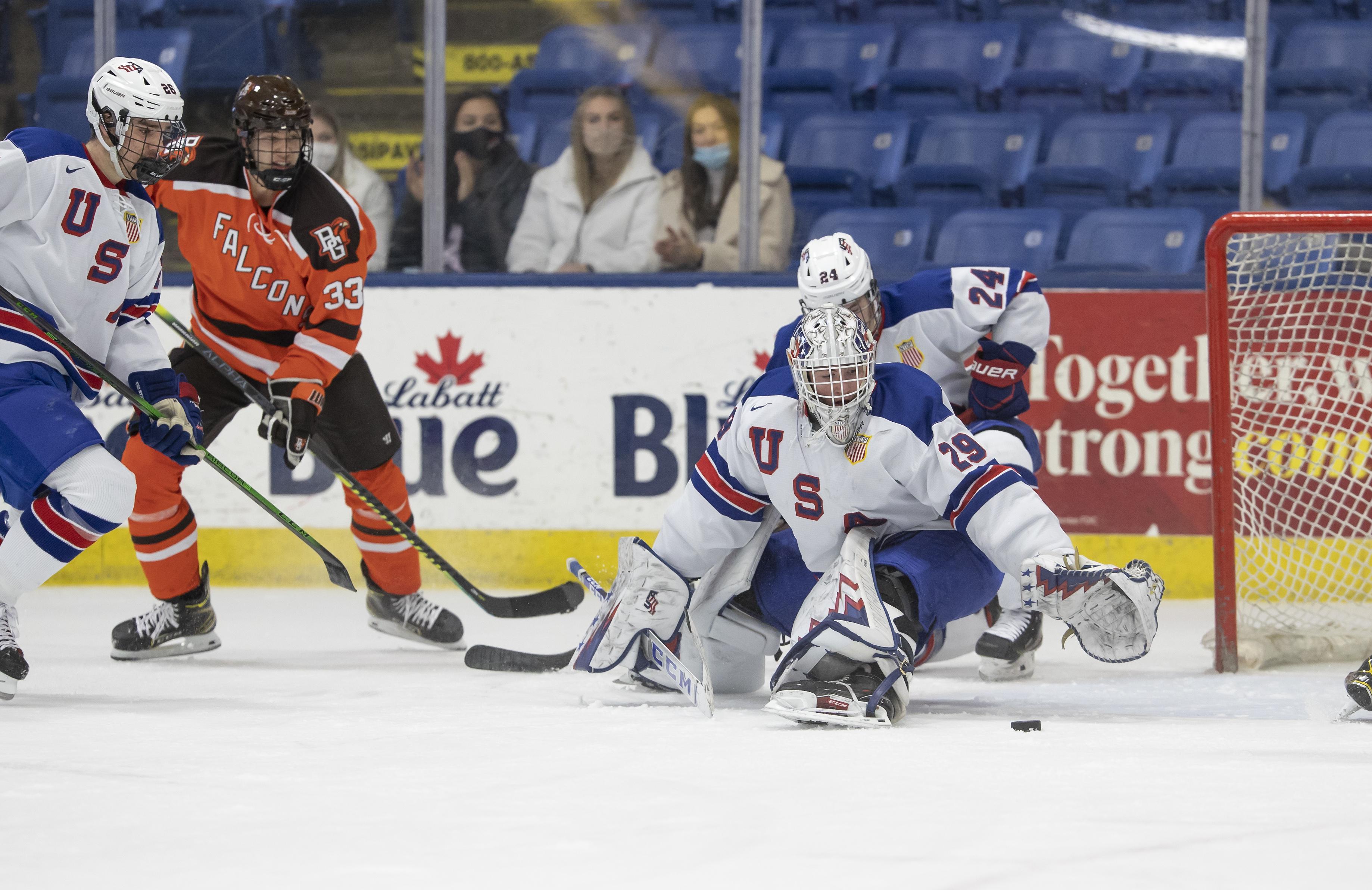 For the second straight day, Dylan Duke (Strongsville, Ohio) kicked off the game's scoring as he muscled in a rebound attempt in front of the net to give Team USA a 1-0 lead at 12:03 of the first frame. The initial shot came from Luke Hughes (Canton, Mich.) at the top of the right faceoff circle and kicked back in front of the net. Duke strong-armed his way to the puck and knocked it in the net while falling on his backside. Sasha Pastujov (Bradenton, Fla.) collected a helper on the score.

The Falcons' Cameron Wright knotted the game before the close of the opening period.

Hughes regained the U18 advantage with a power-play tally less than 90 seconds into the middle frame. Duke made a nice hustle play below the goalline to shift the puck to Sean Behrens (Barrington, Ill.) at the left half-wall. Behrens and Hughes played give-and-go before the University of Michigan commit unloaded on a one-timer to make it a 2-1 game.

18 seconds later, Justin Janicke (Maple Grove, Minn.) doubled the Team USA advantage after capitalizing on a Falcons defensive-zone turnover. Liam Gilmartin (Falls Church, Va.) pickpocketed the BG defender behind the net and shifted the puck in front where Janicke buried his opportunity for a 3-1 lead.

The U18s added a pair of goals in the third, the first off the stick of U17 call-up, Rutger McGroarty (Lincoln, Neb.). Jacob Martin (Eagle River, Wis.) collected a loose puck in the defensive zone and delivered a stretch-pass to McGroarty, who got in behind the Bowling Green defense. The 6-foot-1 forward deked to his backhand before he finished with a forehand shot through the five-hole. Fellow U17 forward Devin Kaplan (Bridgewater, N.J.) picked up an assist on the goal.

Jack Hughes (Westwood, Mass.) concluded the game's scoring when he netted his fourth goal of the season after a between-the-legs maneuver to evade a defender. Pastujov racked up his third assist of the game.

Homer was superb in net for the U18s as his 27 saves were the second-most in a game for the netminder this season.

Team USA returns to action Friday night at USA Hockey Arena as the Under-17 Team squares off against the Youngstown Phantoms for a pair of games on Friday and Saturday evenings. The U18s follow with games against the Muskegon Lumberjacks on Monday and Trine University on Tuesday, both on home ice. Tickets for all four of those games can be purchased at USAHockeyNTDP.com/tix.