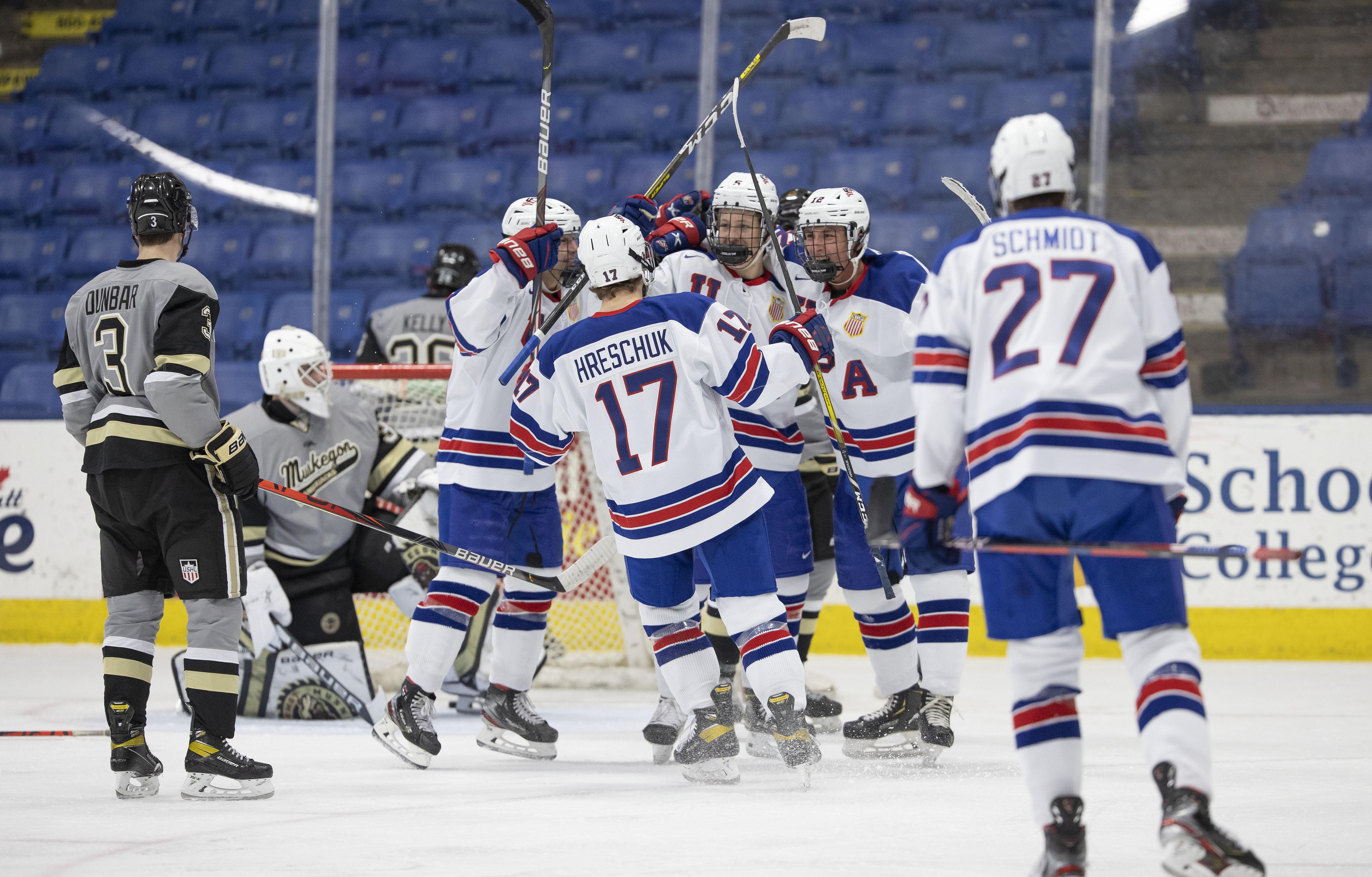 PLYMOUTH, Mich. - Red Savage (Scottsdale, Ariz.) led the way with three points and the U.S. National Under-18 Team had nine different goal scorers as they pushed past the Muskegon Lumberjacks, 9-3, Wednesday evening at USA Hockey Arena.

Jack Hughes (Westwood, Mass.) opened the game's scoring with a power-play tally at 2:34 of the opening period. Caden Brown (St. Louis, Mo.) fed Hughes at the goalmouth with a cross-ice feed where he notched his third goal of the season.

Muskegon's Cameron Berg tied the game at 1-1 but Sasha Pastujov (Bradenton, Fla.) restored the advantage late in the first period. Dylan Duke (Strongsville, Ohio) led a 2-on-1 break and shifted a pass to Pastujov for his ninth tally of the year.

Team USA dominated the middle frame, outscoring the Lumberjacks by a 5-1 margin. Ty Gallagher (Clarkston, Mich.) notched his second score in as many games with a wrist-shot from the right point. That goal was assisted by Justin Janicke (Maple Grove, Minn.) and Savage.

Liam Gilmartin (Falls Church, Va.) followed with his second of the season off a long feed from Jeremy Wilmer (Rockville Centre, N.Y.). The pass put Gilmartin in alone where made a nifty move to his backhand and top-shelf for the score.

Savage and Luke Hughes (Canton, Mich.) followed with goals 24 seconds apart to give Team USA a 6-1 lead, while Duke added his second shorthanded goal in three games. All five second-period goals were scored in a six-minute span for the U18s.

After Muskegon closed the gap to 7-3, Team USA answered with the final two goals of the night. Defenseman Ty Murchison (Corona, Calif.) netted a ridiculous backhand snipe from the center-slot while Wilmer added the game's last goal just 19 seconds later for the 9-3 final.

Goaltender Kaidan Mbereko (Aspen, Colo.) turned aside 33 shots as he picked up the win for the second straight game.

The U18s finish out the week with a pair of contests against the Dubuque Fighting Saints on Friday and Saturday afternoons. Both games are slated for 4:00 p.m. ET at USA Hockey Arena.