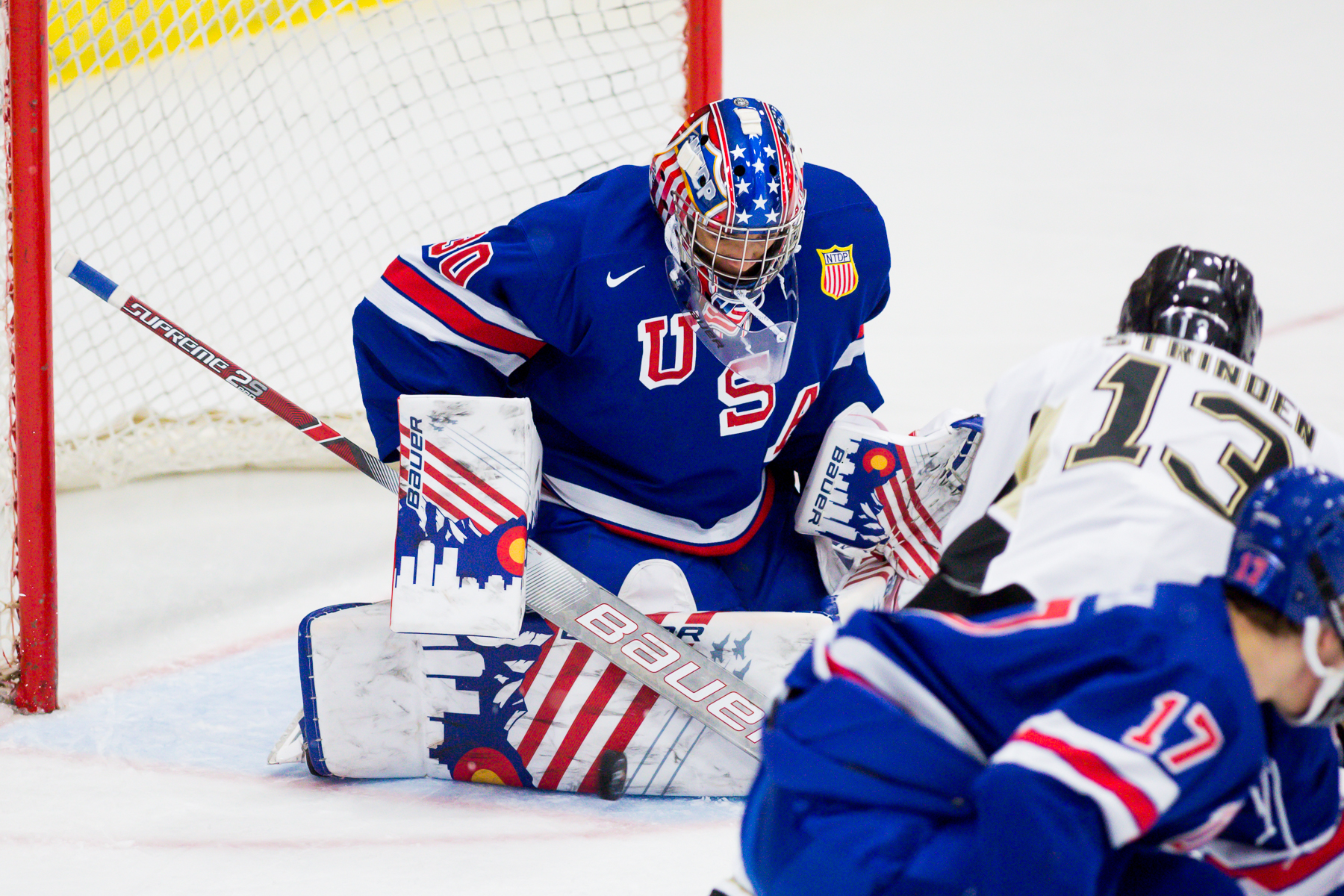 PLYMOUTH, Mich. - The U.S. National Under-18 Team used goals from four different skaters and an impressive performance in net from Kaidan Mbereko (Aspen, Colo.) to defeat the Muskegon Lumberjacks for the second straight night in a 4-2 victory Saturday evening at USA Hockey Arena.

Team USA forward Tyler Boucher (Haddonfield, N.J.) potted the game's first goal just 89 seconds in when he cleaned up a rebound in front for his fourth goal of the early campaign. Aidan Hreschuk (Long Beach, Calif.) found Jack Hughes (Westwood, Mass.) in the center-slot where he took the original shot. Lumberjacks netminder Christian Stoever made the initial save, but Boucher sat on the doorstep for the tap-in and 1-0 lead.

Muskegon's Hank Kempf scored for the second time in two days to tie the game less than five minutes into play.

Sasha Pastujov (Bradenton, Fla.) regained the Team USA advantage with a power-play score with less than a minute remaining in the opening period. Dylan Duke (Strongsville, Ohio) took the first attempt which was pushed aside, but Pastujov was ready to net the rebound for his team-leading fifth score of the season. Hreschuk picked up the secondary helper for his second point of the afternoon.

NTDP newcomer Andre Gasseau (Garden Grove, Calif.) doubled the U.S. lead to 3-1 when he converted off a Muskegon turnover at 6:10 of the second period. The 'Jacks made an errant defensive-zone pass that Gasseau intercepted and rifled off the crossbar and in for his second score of the year.

Muskegon's Davis Pennington cut into the lead to make it 3-2 before the close of the middle frame.

Ryan St. Louis (Riverside, Conn.) put the game away with a late empty-netter to get to the 4-2 final. Luke Hughes (Canton, Mich.) was credited with the lone helper on the score.

Goaltender Kaidan Mbereko (Aspen, Colo.) picked up his second win of the season in as many decisions. The 5-foot-11 netminder recorded 23 saves while playing the entire game.

The Under-18 Team is back in action next weekend when they host the Concordia Falcons Friday evening at USA Hockey Arena. Tickets are available at USAHockeyNTDP.com/tix.