Lessons learned from parents, coaches and others helped Muse make a career in coaching 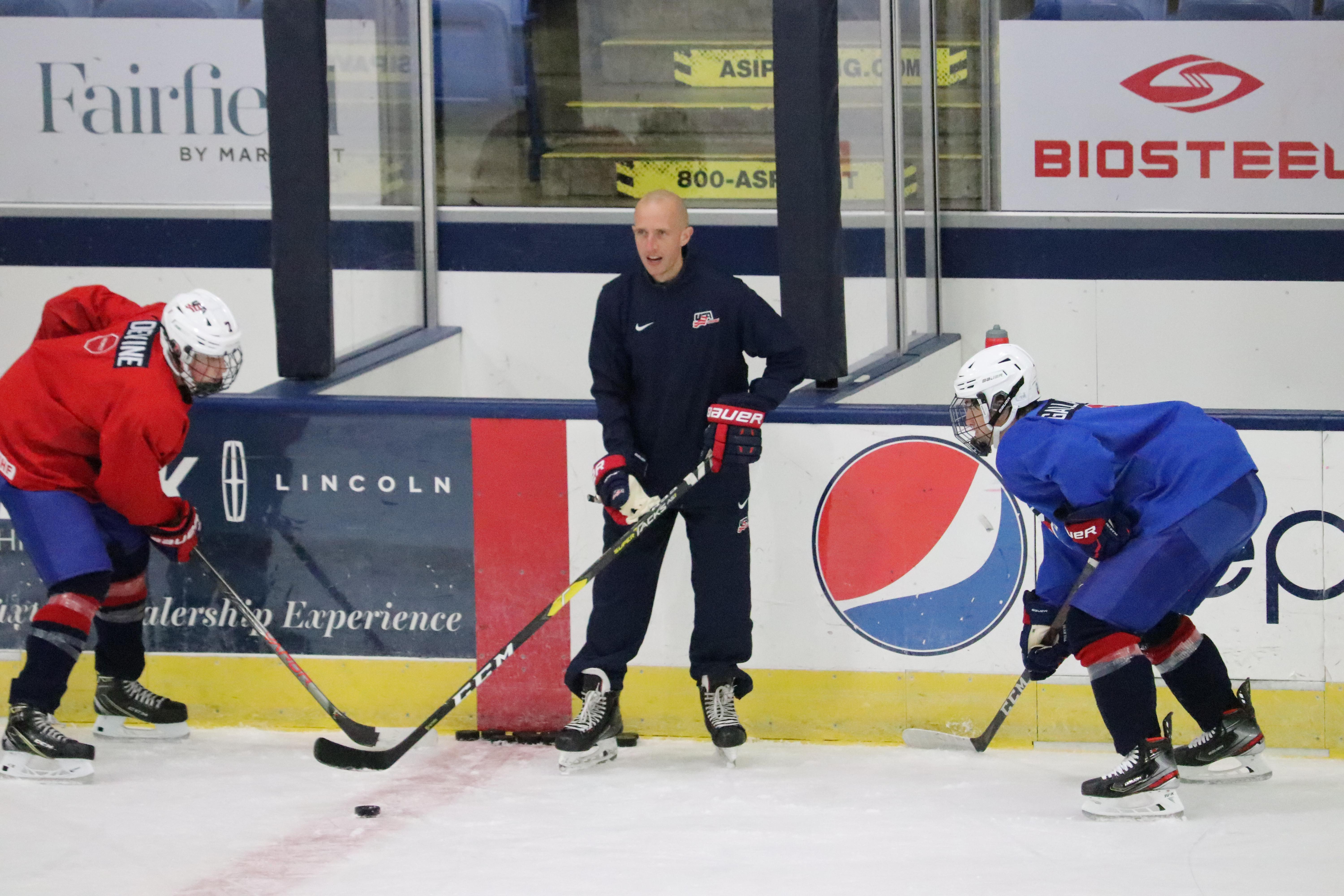 One of the most important lessons that Dan Muse learned growing up as a young hockey player was taught to him by his parents, Dan and Ann.

“I should always give my parents credit,” he said. “They saw I had a passion, even if there were not any rinks around. They couldn’t care less what I was passionate about; they just wanted me to be passionate about something. I swear the only reason I made a [Division] III roster was due to my work ethic.”

That passion and drive has led Muse to become the latest coach of the USA Hockey National Team Development Program. He’s come a long way from a 9-year-old kid desperate for ice living in Northern California.

“The hard part was there were no rinks in Northern California at the time,” said Muse, 38. “There were not even any options to drive multiple hours to a rink at that time. It wasn’t possible. We lived on acreage there and had a small farm. Every day, I would play street hockey with a net my father made me from some 2x4s and chicken wire with my brothers or by myself. It was all I wanted to do was be a hockey player.” 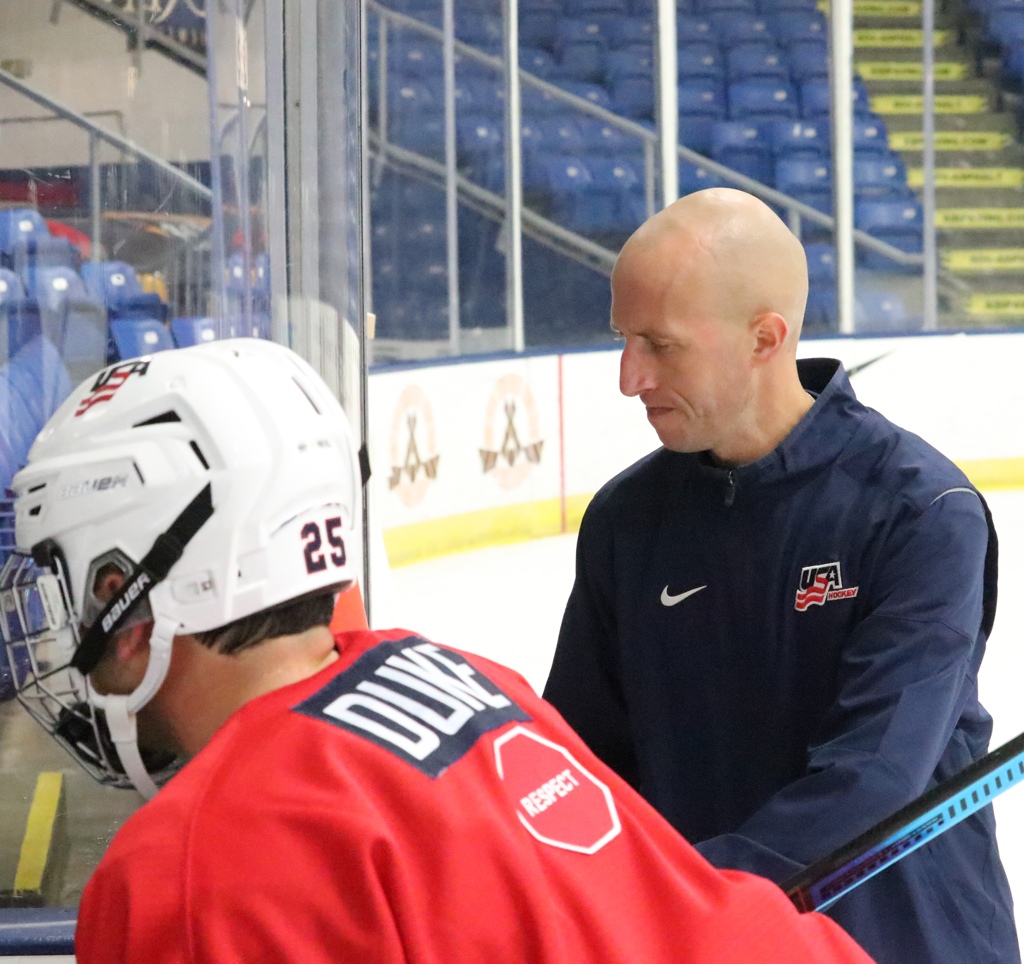 Muse thought he hit the hockey jackpot when the family moved to Alabama when he was in middle school. The whole state only had two rinks, but that was two more than he had access to before.

“I remember going on the ice for the first time in my full equipment,” Muse said. “I could barely skate, but it was the greatest day ever because I was a hockey player.”

Ice meant opportunities, and one such opportunity came from a hockey camp put on by the Birmingham Bulls of the East Coast Hockey League.

“Paul Marshall, who played at Boston College, was there and he was my favorite player all through middle school,” Muse recalled. “I’ll never forget he was out there teaching me the game. I was a little naïve to the fact how far behind I got to play hockey at the local rink or street hockey every day.”

For Muse, there was yet another move as he was entering eighth grade and the family moved to Canton, Massachusetts. It was then when he realized just how far behind he really was in the sport of hockey.

“I went from playing hockey at Alabama to going to a hockey hotbed at the time,” he said. “I was really behind everybody, but I was getting to play at a whole different level from where I had been. It was hard the first couple years, but I was very passionate about playing. It also taught me that even though I’m not anywhere close to other players in my age group at that time, I really wanted it. I was willing to work, and I still loved it just the same.

Muse remarked on all the positive influences he has had in his hockey life, starting with his first coach, his dad, back in California. There was Ed Kirrane, brother of 1960 U.S. Olympic Team captain Jack, who owned a hockey school where Muse worked in high school and helped him realize his hockey goals.

Muse realized “a dream” when he got the opportunity to play college hockey at Stonehill College in Massachusetts, playing four seasons, including serving as alternate captain in 2005. Muse’s original plan was to go to law school after that, but caught the coaching bug in college. While studying for law school, he coached hockey at Milton Prep Academy outside of Boston while working as a teacher.

That was when two more mentors helped push him into coaching: Scott Harlow, his college coach, and Paul Vincent, a skating instructor for the Blackhawks, Bruins and Lightning, among others, who helped Muse work on his skating. It was Vincent in particular who inspired Muse to pass on law school and pursue coaching full time.

“At some point during that year, [Vincent] called my house and I think he told my father that, ‘I heard that Danny was going to law school, but I really think he should coach,’” recalled Muse. “He had never met my father. I had been thinking it already. I went to the open house for the law school and afterwards, I called my parents and told them that I think I’m going to try to teach and coach full time. I think I realized I was going down a path I really wasn’t interested in.”

From there, things just took off for Muse. He took a full-time teaching job at Archbishop Williams, just outside of Boston, and continued to coach at Milton Academy. At the same time, he taught history, which gave him a basis for coaching.

“When I got to the end of my second year out, I wanted to teach hockey full-time, so I started to explore options. I think I emailed every college coach I could and told them that I would work for free. Eventually, Bill Kangas [at Williams College] gave me an opportunity to work for him as an assistant. I gave up my teaching and my coaching jobs to try this out.”

It was a whirlwind from there. After spending one year at Williams (2007-08), he spent a year at Sacred Heart (2008-09) before spending six seasons at Yale (2009-2015), where he helped the Bulldogs to the 2013 national title. Muse saw Yale head coach Keith Allain’s approach to hockey that continues to resonate with him today.

“He is a lifelong learner; a student of the game,” said Muse. “I have always tried to be, but even more so now. He is extremely intelligent about the game. I remember even when I knew that I wanted to be a head coach, I could see how hard the guys want to play for him because they knew how much he cared about them. I saw the impact he had on them as people, whether it was his players or his staff.” 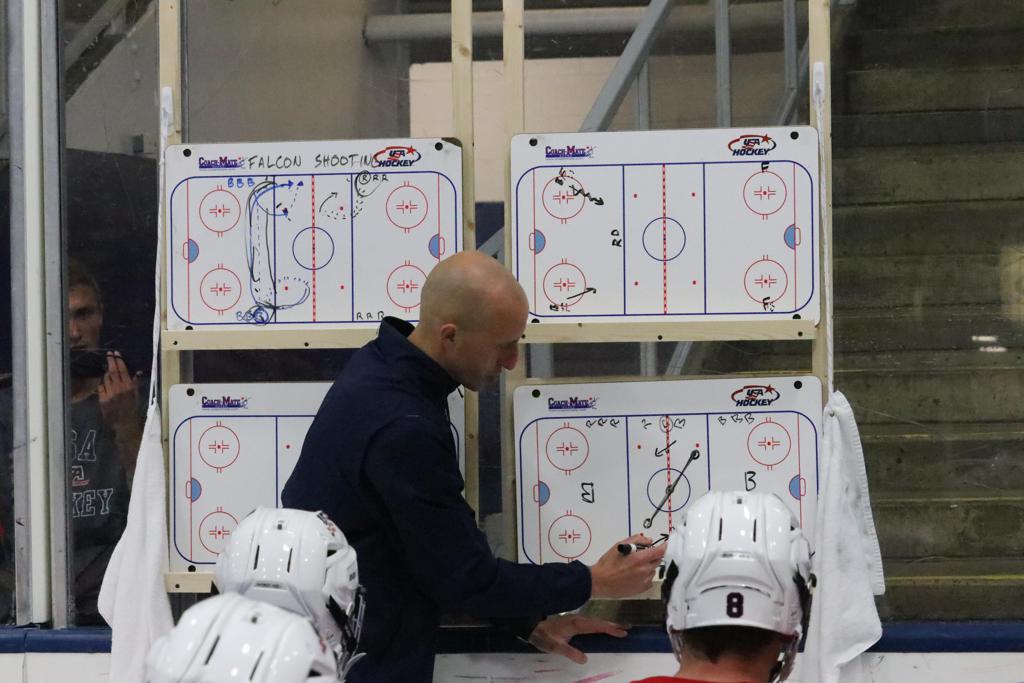 Muse turned his experiences into a head coaching position with the Chicago Steel. It allowed him to build a team and program, helping the Steel capture the Clark Cup championship in 2017.

“Larry Robbins gave me an opportunity to come in and we restructured the whole organization,” he stated. “It gave us a chance to start almost everything from the ground up, but the logo still stayed the same. It was a process, but I’m proud of my two years of work.”

Muse’s work was recognized by USA Hockey when he was chosen to be the video coordinator at the 2013 and 2014 World Junior Championships. He also spent the past three years working with the NHL’s Nashville Predators. So when USA Hockey came calling again, Muse knew this was the right step for him.

“I'm very fortunate to work for USA Hockey full-time in this unique developmental setup,” he said. “… For me, development has always been at the top of my list. To be able to come in here and represent my country and coach highly motivated players who are at the top of their birth year and have an opportunity to work with them in this development model and to play internationally. You get to represent your country every day. It’s a true honor. It’s been a fun journey.”

Muse will no doubt pass along the same lessons he has learned in his hockey journey to his young players, including those he learned from his parents back when he was taking his first strides.

“For hockey or for anything, I do believe if you find something you are passionate about, you should use that as a driving force for everything that you do,” said Muse. “I feel very fortunate at a young age that I found something that I loved doing every day. I have taken as much as I possibly can from the game. It has shaped me into the person I am today because of the good lessons that I have taken from it; it made me a better person, a better brother, a better husband and a better father.

“There are so many more lessons that you can take that go beyond the game. You should use that passion as a driver for everything you do and stick with it. I think there are a lot of different career paths in this game and I think it’s finding that right path for you.”