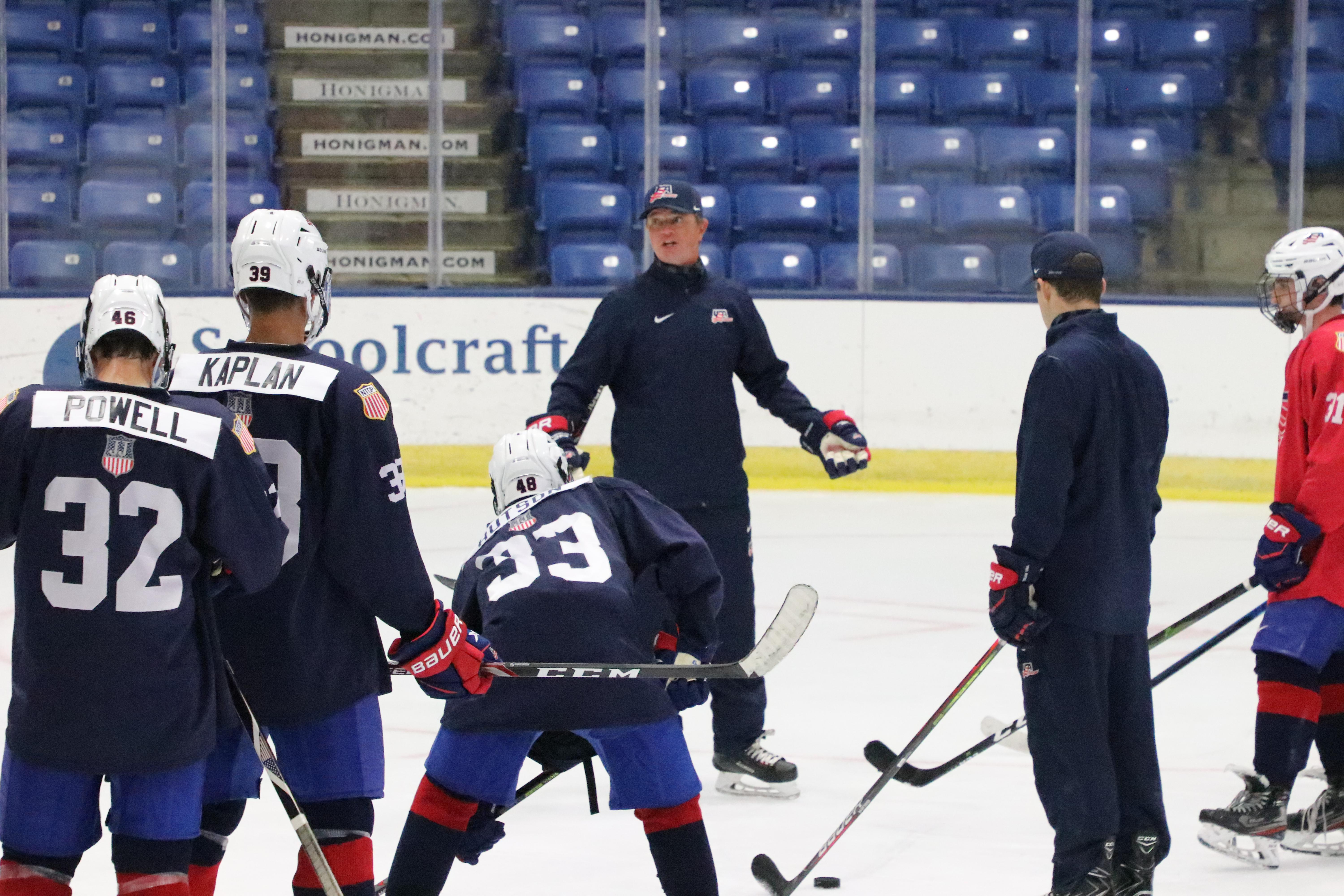 It wasn’t love at first sight for Adam Nightingale and hockey. But with the help of some friends who played on an outdoor rink, the sport soon became his life.

“I started playing around 6 years old when we were living in Jackson, Michigan, since we hadn’t moved up north yet, but I really didn’t like it,” he said. “We moved to Cheboygan [Michigan] where we had an outdoor rink. I had a couple buddies who were playing, and I talked about playing hockey. We talked our parents into playing so they signed us up. We played on an outdoor rink until I was 14. Some of my best memories from youth hockey were in Cheboygan.”

The path to Nightingale being named a head coach for the USA Hockey’s National Team Development Program began on that rink as he helped develop his love for the game of hockey. 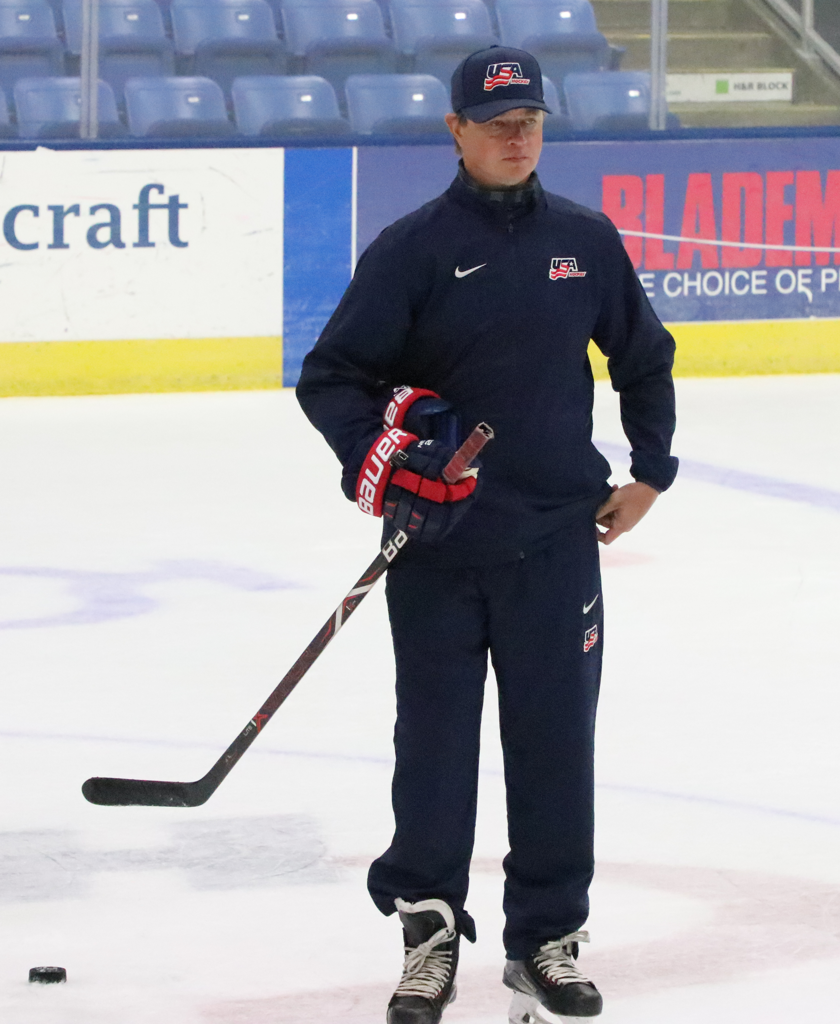 “Now that I look back, you have to really love hockey. You have to have passion,” he said. “We had one locker room that we shared with another team and it was a small locker room. There was chicken wire for glass. There was a sweeper that was our Zamboni. We would help our dads with it. The majority of time the dads would shovel the snow to the boards and then, put water on. None of it was a big deal.

“We didn’t know any different. I remember getting that call as the weather got cold that we could have ice by Christmas. I think we would get super jacked up because we played every other sport during the spring, summer and fall. Then, once winter came, we would get our gear and go. It really helped develop my passion and love for the game.”

It also helped that Nightingale’s older brother Jason, and younger brother Jared, were there to fuel his competitive spirit. The trio could often be found playing sports together when they were growing up.

“We were all competitive,” he said. “I think if someone was good at something, we all wanted to be good at it or better than the other one. We would play other sports and we would always want to win.”

Nightingale played his college hockey at Lake Superior State University (2000-02) and Michigan State University (2003-05), serving as alternate captain for two seasons. After playing parts of four seasons in the ECHL, he was a year out of hockey when he started to realize that he missed the sport.

“I called around and John Lafontaine was the athletic director at Shattuck-St. Mary’s [prep school in Minnesota],” Nightingale said. “I interviewed and fortunately, I got a job where I was a teacher and a coach, and a dorm parent and an advisor and ran summer hockey camp. I had to wear a lot of different hats but right away I could tell that I had a passion for it. I wasn't perfect and I'm still not perfect, but I knew that I liked coming to the rink every day to help a group of people and work towards a common goal.”

Nightingale’s coaching journey also has led him to stops at Michigan State (director of hockey operations), the Buffalo Sabres (video coach) and the Detroit Red Wings (video and assistant coach). Each of these positions and the coaches he worked under, such as Tom Anastos with the Spartans and Jeff Blashill with the Red Wings, helped mold him and provided valuable experience that he carries with him to this day.

“I have been fortunate to be around really good people at all the places I have been,” he said. “… It has helped prepare me for this job.”

Nightingale brings experience working with USA Hockey, after serving on the staff of four U.S. national teams. His first experience was as video coach for the U.S. National Junior Team in 2015 and he held the same role for the U.S. Men’s National Team at the past three IIHF Men’s World Championships, including the 2018 squad that captured the bronze medal in Copenhagen and Herning, Denmark.

“My first opportunity was really eye-opening to me, working with Jim Johannson and Mark Osiecki, and seeing how much it meant to USA Hockey,” he explained. “I watched the tournaments from afar growing up and through my college years. I had teammates who played in it but to actually be a part of it and witness and see how much it meant for the team to have success. Watching when Team USA gets off the bus, it's different.”

So, it should come as no surprise, when an opportunity arose to coach at the NTDP, Nightingale jumped at the chance to fulfill his lifelong dream of becoming a head coach.

He credits his parents — Ron and Debbie — in teaching him some lessons that he still carries with him today and has impacted him as a coach.

“They never treated me any different, whether I was having success on the ice or not,” explained Nightingale. “I didn't make a team until my last year in midgets — I couldn't make a AAA team until then. My parents kept supporting me. They knew I had a dream and they never once told me that you couldn't do it, or it is too much money. It was always, if you want to keep working, are committed and respect your coaches, you can do this.”

Their approach must have been effective, because now all three brothers are involved in hockey. Jason has spent the last eight years with the Buffalo Sabres and is currently the director of analytics and assistant director of scouting. Jared is an assistant coach in the Ontario Hockey League after spending one year as an intern coach with the NTDP.

“When we all get together, hockey tends to be the topic of conversation even with my mom and dad,” explained Nightingale. “I think both of them are great resources for me to keep growing as a head coach. Jason has that analytical piece and he has played the game and was a coach at the college level. Jared had a long pro career and is just starting his coaching career. We may not have the same views on hockey but I think that is good so we can have that back and forth. I try to take advantage of that as much as I can.”

Not only does Nightingale have plenty of advice and experience he can pass down to his players at the NTDP, he can also give advice to other coaches following along a similar path.

“I'm a firm believer that whatever level you are at, you can grow as a coach,” said Nightingale. “When I first went to Shattuck to start coaching, I never said I want to coach the national team or in the NHL. I think you have to do a good job with where you are at and treat people with respect. Treat your players with respect and understand that you do not have all the answers and that is okay. I still don't. Having that humility is important. I never had a roadmap to anything, I liked coaching. I tried to do my best and doors just opened.”