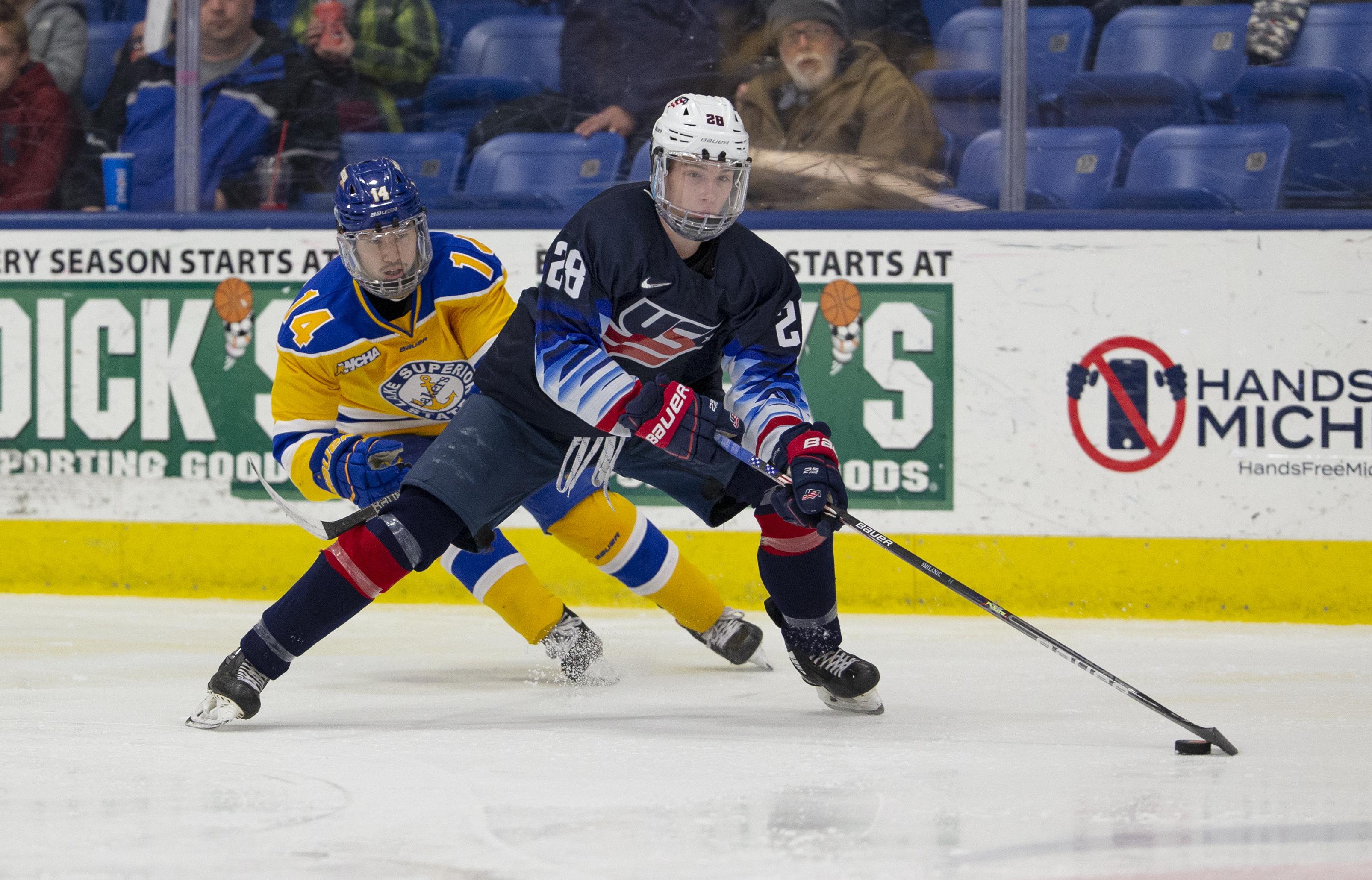 PLYMOUTH, Mich. - Thomas Bordeleau (Houston, Texas) and Ty Smilanic (Denver, Colo.) scored in the shootout as the U.S. National Under-18 Team came from behind to defeat the Lake Superior State Lakers, 5-4, in the final game of the Kroger College Series.

The Lakers opened the scoring at 19:38 of the first with a goal from Pete Veillettte. Matthew Beniers (Hingham, Mass.) tied the game for Team USA on the power play at 18:10 of the second period when he patiently stickhandled to the right corner of the crease and snuck the puck past the Lakers goaltender. Smilanic  and Jake Sanderson (Whitefish, Mont.) added the assists.

After a puck deflected into the air and Beniers took a baseball-style swing to put the puck on net, Chase Yoder (Fairview, Texas) converted on a rebound giving the U18s a one goal lead at 4:11 of the third.

Team USA extended their lead on a bizarre goal from Daniel Laatsch (Altoona, Wisc.) less than a minute after Yoder's goal. The 6-foot-5 defenseman dumped the puck into the Lake State zone from inside his own blueline and the puck bounced up and in to push the lead to two.

Lake Superior came  back with a pair of their own goals, both rebounds from Max Humitz and Miroslav Mucha. The Lakers retook the lead, 4-3, on a deflection by Louis Boudon.

The lead changes and offensive outbreak continued as Brett Berard (East Greenwich, R.I.) ripped a wrister in the slot and tied the game on a beautiful set-up from Beniers.

The score remained locked at four apiece and sent the game to a five minute three-on-three overtime period.

Team USA outshot Lake Superior, 3-2, in the extra session but neither side netted a goal.

Noah Grannan (Germantown, Wis.) stopped Boudon to open the shootout and Team USA opened up an early advantage courtesy of Bordeleau. The Michigan commit hesitated, toe-dragged and scored to put Team USA ahead after the first round of the shootout.

Neither team scored in the second round but Chase Gamelin opened round three with a goal for the Lakers. Smilanic won the game when he came down the slot, shoulder-faked and sniped a shot into the back of the net.

The U18s will travel to Chomutov, Czech Republic for a Five Nations tournament taking place February 5-9. The team returns to USA Hockey Arena on Thursday, February 20 at 7 p.m. against the Dubuque Fighting Saints.