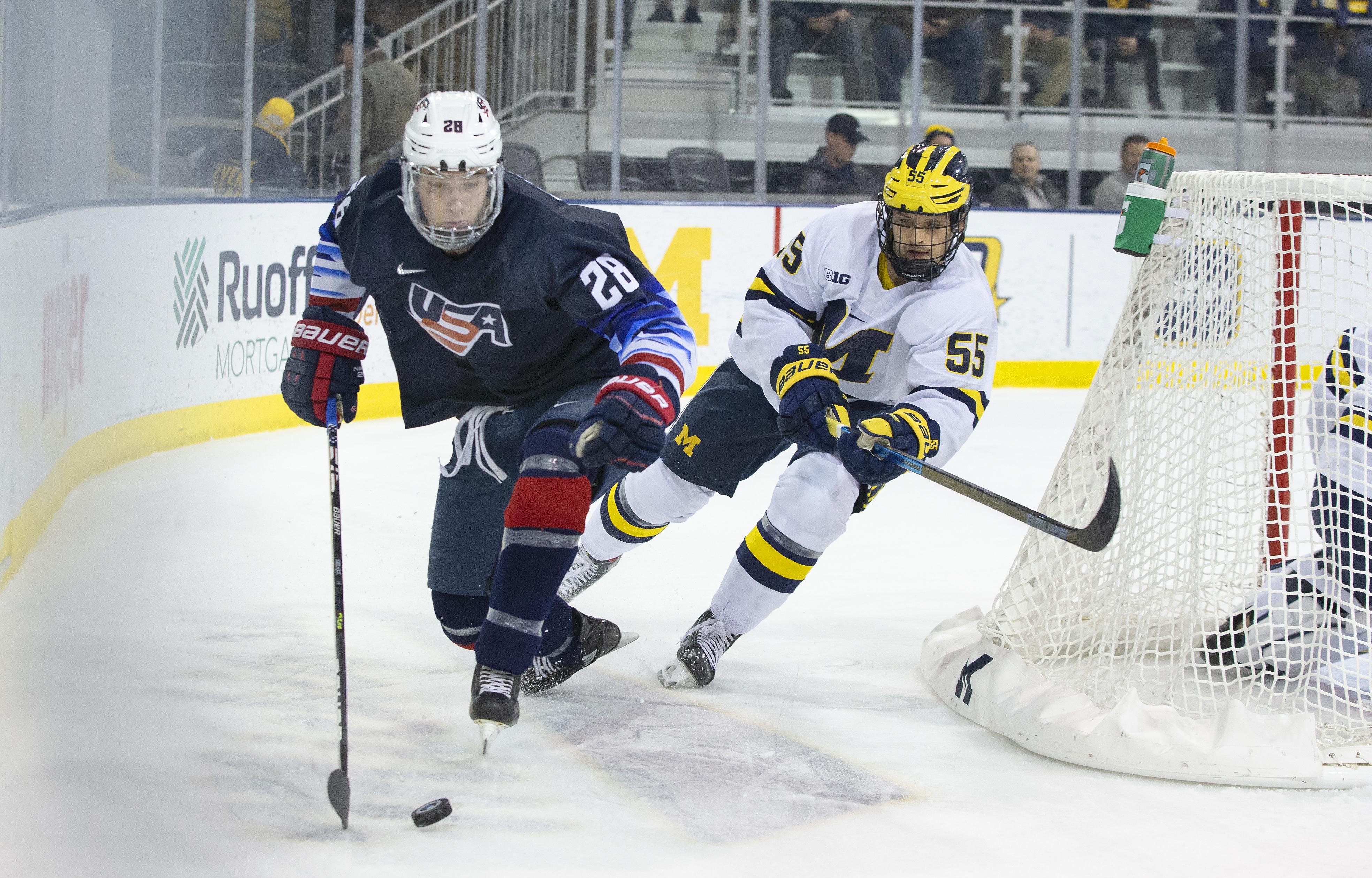 Landon Slaggert (South Bend, Ind.) kicked off the game's scoring with a shorthanded marker at 2:48 of the opening frame. Bordeleau collected the puck in the defensive zone and drove up the ice with Slaggert. He shifted the pass from left to right wing at the faceoff circle and Slaggert one-timed it home for his ninth goal of the season and a 1-0 USA lead.

Hunter Strand (Anchorage, Alaska) doubled the lead before the midway mark of the period with an excellent redirection in front of the net. Ty Smilanic (Denver, Colo.) laid out on the ice to keep the puck in the offensive zone and pushed his pass to Tyler Kleven (Fargo, N.D.) at the blueline. The 6-foot-4 defenseman put a booming slap-shot on net that Strand tipped in front of Wolverines goalie, Strauss Mann, for a 2-0 USA advantage.

After a scoreless second period, Luke Tuch (Baldwinsville, N.Y.) made it three in a row when he converted on another USA odd-man rush at 10:56 of the third. Bordeleau led the 3-on-2 on a delayed penalty and found Slaggert in the middle of the ice. The Notre Dame-commit made the extra feed to the bottom of the right circle where Tuch blasted home his 13th goal of the season.

Bordeleau netted his third assist of the game on Team USA's final goal, the sixth of the season from Smilanic. Matthew Beniers (Hingham, Mass.) drove the puck into the offensive zone and found Bordeleau in the right corner. The 5-foot-10 forward drew the defense before he found Smilanic for an easy back-door tap-in and 4-0 lead.

NTDP alum Johnny Beecher ruined Commesso's shutout bid with less than a minute to play in regulation to make it a 4-1 final.

Commesso finished the game with 32 stops on 33 shots, including two highlight-reel saves early in the game. He made a no-look spinning save with his stick to keep the Wolverines off the board early in the opening period and then made a glove save on a point-blank shot from Emil Ohrwall alone in front of the net in the second.

The U18s finish their Kroger College Series next Friday night at USA Hockey Arena when they host Lake Superior State. Puck drop is slated for 7:00 p.m. in Plymouth.