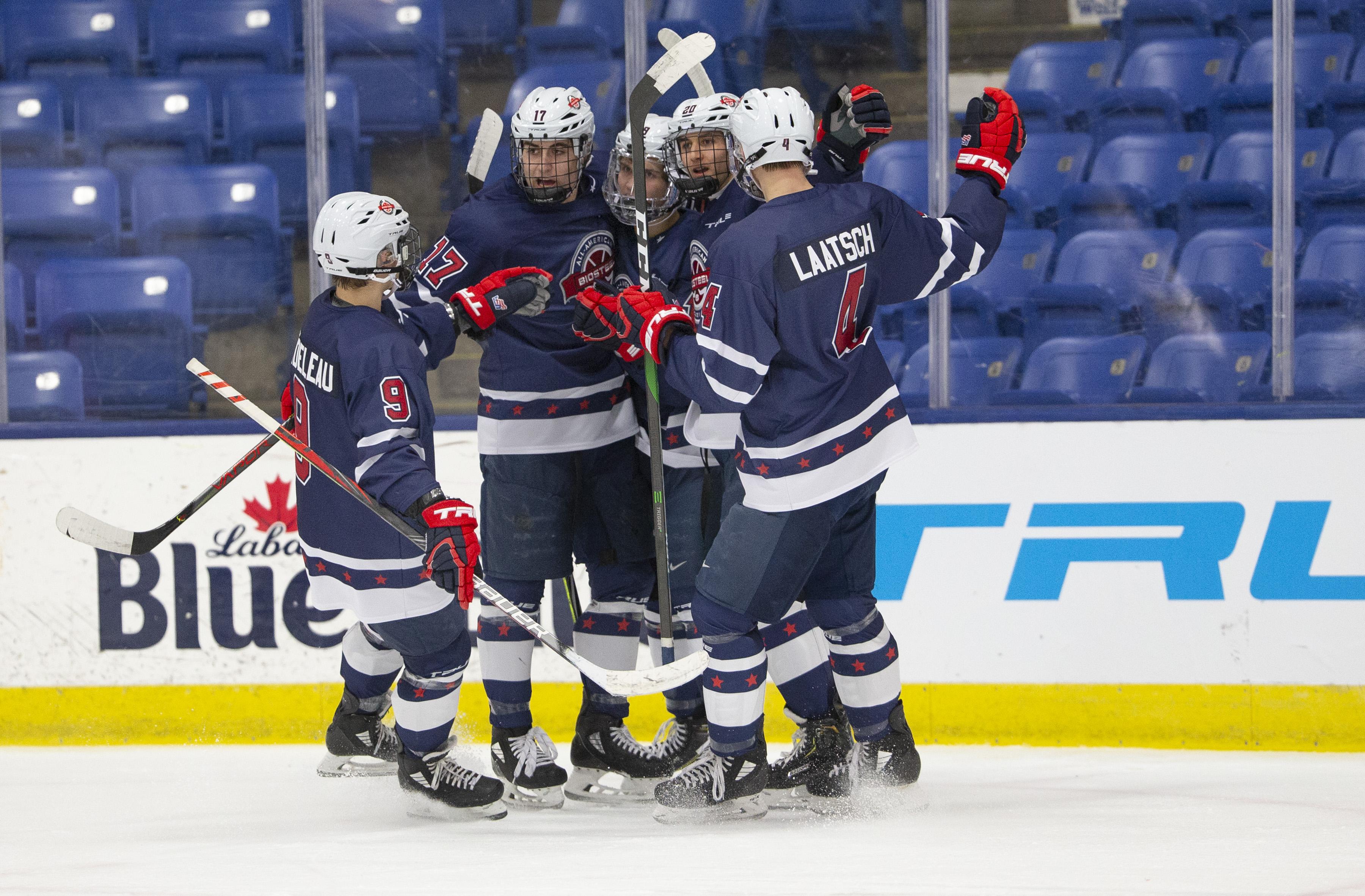 A joint effort between USA Hockey, the USHL and the NHL, the BioSteel All-American Game features 43 of the top American players eligible for the 2020 NHL Draft playing in front of over 200 NHL scouts.

For the first time since its inception, this year's format pitted players from the U.S. National Under-18 team (Team Knuble) against the top draft-eligible American-born players from the rest of the USHL (Team Gomez).

Sanderson, who was recently ranked as the 11th best North American prospect in the NHL's mid-season prospect rankings, was one of several players from Team Knuble who had a case to earn MVP honors. He was flanked by four fellow NTDP teammates -- Brett Berard (East Greenwich, Conn.), Tyler Kleven (Fargo, N.D), Luke Tuch (Baldwinsville, N.Y.) and Hunter Strand (Anchorage, Alaska) -- who all notched a goal and an assist.

Berard wasted little time finding the scoresheet, beating Team Gomez's Aidan McCarthy on a breakaway just over a minute into the contest for an early 1-0 advantage. Kleven set up the early tally with a well-placed stretch pass out of his defensive zone and Berard fired it glove side for the score.

Alex Leferriere tied the game for Team Gomez at 11:56 of the first period when his wrist-shot from low in the slot trickled past the outstretched stick of Commesso.

Ty Smilanic (Denver, Colo.) reclaimed the lead for Team Knuble as the first period wound down, finishing off a tic-tac-toe passing sequence with Sanderson and Strand with a one-timer into a wide-open cage to put his team ahead 2-1 at 17:39.

Kleven extended the lead 40 seconds later when he fired a slapshot from the point past McCarthy to push the score to 3-1 in favor of Team Knuble. Thomas Bordeleau (Houston, Texas) won a faceoff over to Tuch who dished it back to the point for Owen Gallatin (White Bear Lake, Minn.). Gallatin fired a pass over to the right side for Kleven, who loaded up and rifled the puck past McCarthy.

Following a scoreless first half of the second period, Tuch was awarded Team Knuble's fourth goal of the night at 14:25 as he redirected a shot from Landon Slaggert (South Bend, Ind.) off his leg and past Logan Stein. Bordeleau picked up the secondary assist.

Strand extended Team Knuble's advantage to 5-1 just over three minutes into the third period. Strand's goal followed a beautiful drive to the net by Sanderson. The 6-foot-2-inch blueliner split two defenders as he found space in the slot, drew Stein to the left post as he came in on goal, and slid it far-side to Strand for the tap-in tally. Dylan Peterson (Roseville, Calif.) collected the extra assist on the play.

Jacob Truscott (Port Huron, Mich.) put the finishing touches on the Team Knuble win with a goal on a wristshot from the left point to put his group ahead 6-1 at 14:32. Berard earned the primary assist on the play, and Chase Yoder (Fairview, Texas) earned the secondary helper.

Team Knuble finished the game with a 31-24 shot advantage.

All four goalies who dressed for the game found the ice. Commesso and Grannan combined for 23 saves on 24 shots to earn the win for Team Knuble. Team Gomez's McCarthy and Stein combined for 25 saves on 31 shots in the loss.