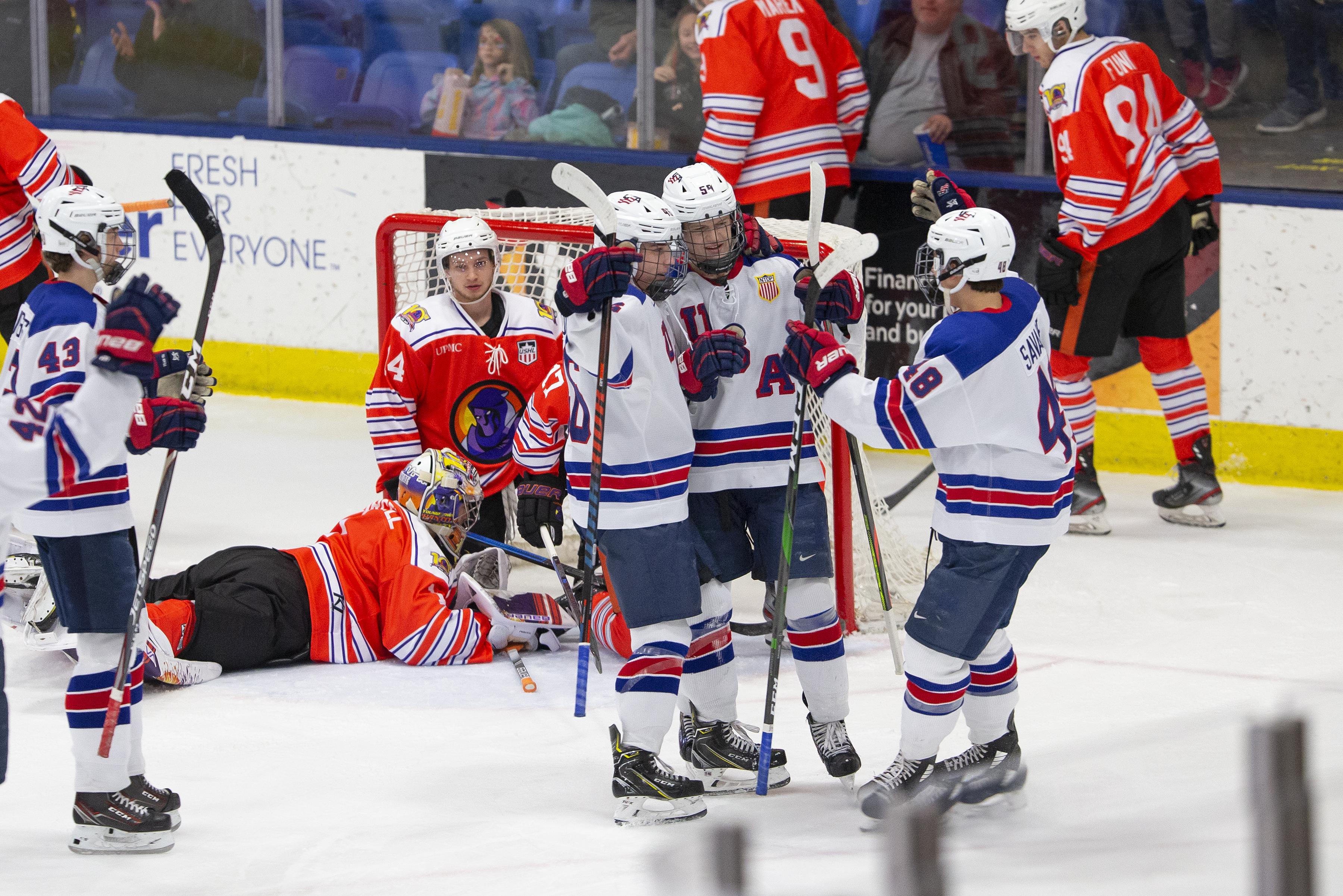 The U.S. National Under-17 Team rolled through the Youngstown Phantoms, 9-3, Friday evening behind multi-point efforts from six Team USA skaters. Red Savage (Scottsdale, Ariz.) led the way with four points on the night while Justin Janicke (Maple Grove, Minn.) tacked on a trio.

Janicke kicked off the game's scoring when he netted a rebound chance at 10:44 of the opening frame. Janicke slid a pass out in front to Ryan St. Louis (Riverside, Conn.) for a one-timer which was turned aside by the Phantoms' Colin Purcell. Janicke found the rebound and wristed his shot home for a 1-0 lead. Savage picked up the secondary assist on the score.

After Youngstown tied the game at 1-1, Sasha Pastujov (Bradenton, Fla.) restored Team USA's lead with a bar-down goal from the center slot. Ty Murchison (Corona, Calif.) and Savage picked up the helpers on Pastujov's 10th of the season.

Savage made it 3-1 before the close of the first when he picked up the puck after a Youngstown turnover and lasered his shot over the glove of Purcell. The score was his third point of the period.

Forward Liam Gilmartin (Falls Church, Va.) made it a 4-1 contest less than 30 seconds into the middle frame with a shorthanded tally, his ninth goal of the season. The 6-foot-1 forward beat the defenders down the ice and deposited his shot through the five-hole of Purcell.

Sean Behrens (Barrington, Ill.) notched his fourth of the season when he went down to one knee and blasted a one-timer from the left circle. Jack Hughes (Westwood, Mass.) and Roman Schmidt (Midland, Mich.) picked up assists on the goal to make it 5-1.

Pastujov tallied again for his second score of the night to make it 6-1 on the power play. After Luke Hughes (Manchester, N.H.) made an exceptional play to keep the puck in the zone, Pastujov backhanded a rebound attempt off the original shot from Aidan Hreschuk (Long Beach, Calif.).

After Youngstown got a score late in the middle period, Janicke started the third with his second goal of the evening. The Notre Dame commit took a pass up the left wing from Jacob Martin (Eagle River, Wis.) and roofed his shot into the top corner.

Youngstown's Linden Alger responded to make it 7-3 at 5:08 of the third but St. Louis answered for Team USA's eighth of the night. Janicke fed St. Louis in front of the net where he one-timed a slap-shot into the cage. The helper was Janicke's third point of the night while Ethan Straky (Ormond Beach, Fla.) got on the scoresheet with an assist.

Gilmartin became the third skater to record a pair of goals when he finished a beautiful set-up from Jeremy Wilmer (Rockville, Centre, N.Y.) to finish the scoring at 12:37 of the third.

Goaltender Kaidan Mbereko (Aspen, Colo.) picked up the win in net as he pushed aside 25 of the 28 shots he saw. Mbereko improved his record to 14-3-0 on the season and has won seven of his last eight decisions.

The two teams finish the home-and-home set tomorrow evening at Covelli Centre in Ohio. The U17s return to USA Hockey Arena for a pair of games next weekend including Nickelodeon Night featuring Spongebob Squarepants. For tickets to that game, or any future Team USA home game, visit USAHockeyNTDP.com/tix or call 734-453-8400.