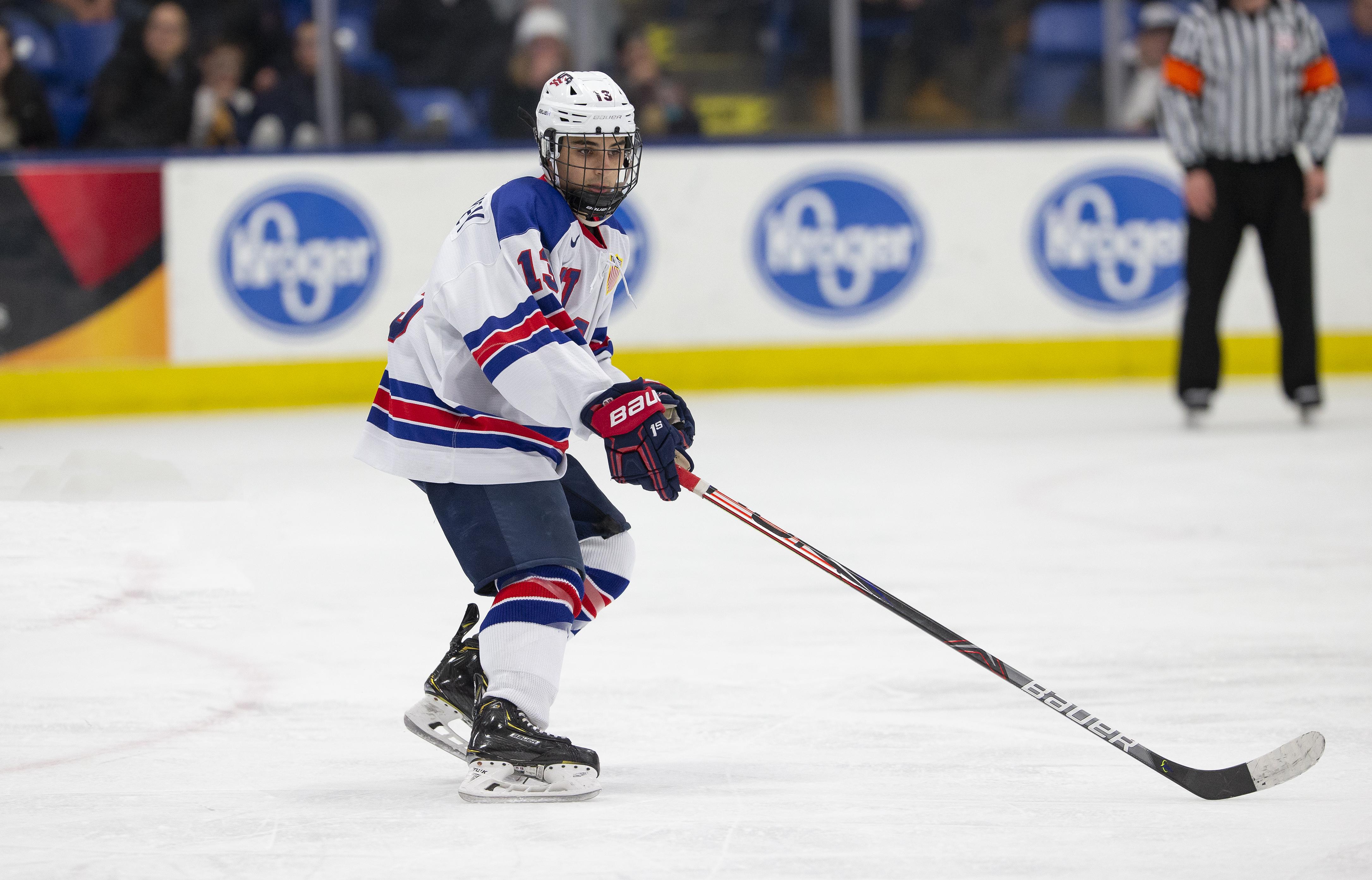 YOUNGSTOWN, Ohio - The U.S. National Under-18 Team scored three goals in 90 seconds during the middle of the second period to propel themselves to a 5-2  win over the Youngstown Phantoms Friday night at Covelli Centre in Ohio.

After Youngstown grabbed the game’s first goal, Smilanic answered 39 seconds later in his return to the U18s lineup. Landon Slaggert (South Bend, Ind.) spurred the Quinnipiac University commit and Smilanic finished the breakaway with a quick forehand shot for his fourth score of the season.

40 seconds later, Dzhaniyev smacked home a backdoor tap-in that gave Team USA its first lead of the night at 2-1. Tanner Latsch (Muskegon, Mich.) sent the puck from down low to Jacob Truscott (Port Huron, Mich.) at the blue line. The defenseman steadied the puck and sent a long pass to Dzhaniyev sitting on the goalline for the lead.

Beniers finished a two-on-one less than a minute later to push the U18s’ advantage to 3-1. After Youngstown failed to clear their defensive zone, Brett Berard (East Greenwich, R.I.) snuck in below the defense, drew the lone defender and slid the puck across the crease for Beniers to knock home for his 10th goal of the season.

The Phantoms’ Jake Suede responded with a goal to make it 3-2 after two periods.

Dylan Peterson (Roseville, Calif.) restored the two-goal advantage when he ripped a wrister past Dominic Basse at 11:05 of the third. The 6-foot-4 forward took a nifty drop-pass from Thomas Bordeleau (Houston, Texas) and drove the right face-off circle before he finished for his third tally of the year.

Luke Tuch (Baldwinsville, N.Y.) finished the scoring late in the third after he corralled a stretch pass from Eamon Powell (Marcellus, N.Y.) at the attacking blue line. Tuch took one stride into the zone and fired from the top of the left face-off circle for his third goal in two games.

Team USA finished the game with a commanding 33-12 advantage in shots on net.

Drew Commesso (Norwell, Mass.) picked up the win in net as he extended his record to 9-4-0 on the season.

The win was Team USA’s (16-7-0-0) seventh straight in USHL play and their 32 points puts them in first place in the Eastern Conference.

The two teams complete the home-and-home set tomorrow night in Plymouth, Michigan. It is the annual Teddy Bear Toss at USA Hockey Arena, presented by Orin Jewelers. For tickets to the game, visit USAHockeyNTDP.com/tix or call the USA Hockey Arena box office at 734-453-8400. 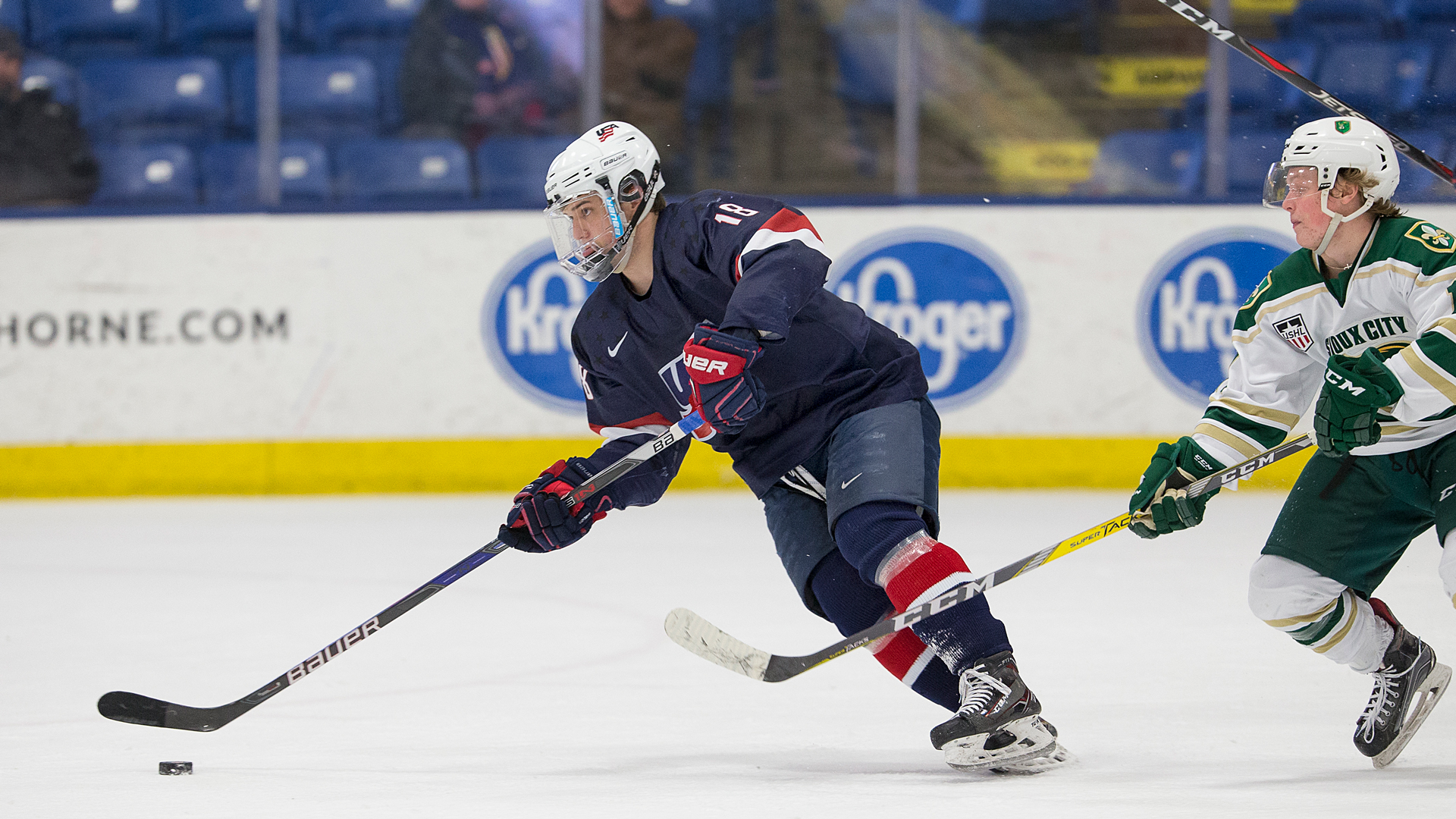 Caufield opened the scoring for the U17s at 5:03 of the first period on the breakaway. He sent the puck over the glove of Muskegon’s Keegan Karki after collecting a pass from Alex Turcotte (Island Lake, Ill.) at the blue line.

Ryder Rolston (Birmingham, Mich.) netted his fourth goal in his last three games at the 19:30 mark of the first to give the U17s the lead heading into the first intermission. Alex Vlasic (Wilmette, Ill.) skated the puck into the zone before sending it over to Rolston who shot it in from the right circle.

Muskegon netted two quick goals in the second to take the 3-2 lead.

Michael Gildon (Plano, Texas) tied the game at three at 9:37 of the second period lifting the puck on the backhand.

Trevor Zegras (Bedford, N.Y.) regained the lead for the U17s at 10:03 of the middle frame. Marshall Warren (Laurel Hollow, N.Y.) sent the puck to Zegras at the top of the left circle who then wristed it beyond Karki on the power play.Ryan Siedem (Madison, N.J.) also picked up an assist on the goal.

A giveaway by Muskegon in the slot resulted in Caufield’s second goal of the game at 4:44 of the third period.

Caufield competed the hat trick at 6:51 of the final frame with help from Matthew Boldy (Millis, Mass.) and Henry Thrun (Southborough, Mass,).

Boldy picked up his second point of the afternoon and gave the U17s the 7-3 lead at the 13:21 mark of the third period.

Muskegon added two goals at 17:11 and 18:30 of the third before John Beecher (Elmira, N.Y.) sealed the 8-5 win with the empty-netter. Boldy tallied his third point of the day with the lone assist.

With the U17s win and the U18s win on the road, Team USA currently sits in first place of the Eastern Conference with 35 points.

The U17s are back in action Saturday (Jan. 20) when the Sioux Falls Stampede come to USA Hockey Arena for Star Wars Night. Tickets are available at USAHockeyNTDP.com/Tix.