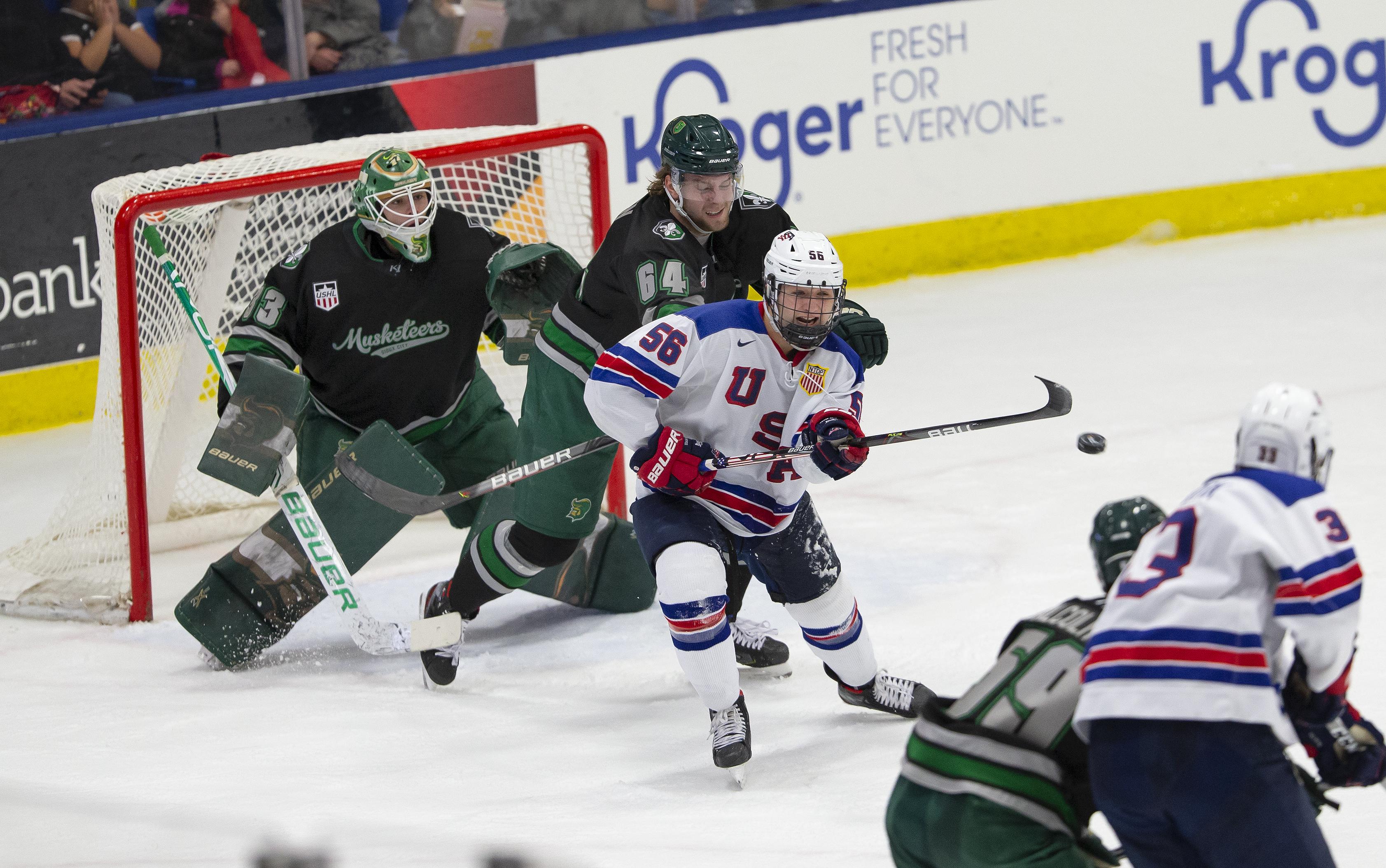 PLYMOUTH, Mich. - Ethan Straky (Ormond Beach, Fla.) found the back of the net for the overtime game-winner as the U.S. National Under-17 Team finished off a weekend sweep of the Sioux City Musketeers with a 6-5 victory Saturday night at USA Hockey Arena.

After a successful penalty kill for Team USA to start the extra frame, Straky snuck in behind the play as Caden Brown (St. Louis, Mo.) left the box on a 2-on-1 with Jack Devine (Glencoe, Ill.). After an initial save by Sioux City’s Ethan Haider, Straky poked in the rebound to give his team its second overtime winner in as many nights.

Jeremy Wilmer (Rockville Centre, N.Y.) opened the scoring for the U17s when he chipped in a cross-ice feed from Pastujov at 4:11 of the first period.

Duke padded Team USA’s early lead with a shorthanded goal at 8:22 to put the U17s up 2-0. Duke collected the puck off a turnover in the neutral zone, streaked into the offensive end and unleashed a wrister from the right circle to beat Haider.

The Muskeeters got on the board less than 45 seconds later to cut the U17s lead and tied the game before the period’s conclusion on a goal from Sam Stange.

In the second period, Team USA scored twice in the final four minutes to take a 4-2 lead into the final frame.

Colby Saganiuk (Plainfield, Ill.) broke the tie with a power-play goal off a rebound to put the U17s up 3-2 at 15:48. Jacob Martin (Eagle River, Wis.) took the original shot from the point, and Red Savage (Scottsdale, Ariz.) also got a piece of the puck before it kicked out to Saganiuk, who tucked it in for his fifth mark of the year.

Duke then collected his second goal of the game at 18:39 to give Team USA its second two-goal lead of the night. Aidan Hreschuk (Long Beach, Calif.) earned the lone assist on the tally.

After Sioux City scored to open the third, Tyler Boucher (Haddonfield, N.J.) banged home a rebound off a shot from Pastujov to put the U17s up two again. Chaz Lucius (Grant, Minn.) garnered the secondary helper on the play.

The Musketeers proceeded to score twice more, evening the game at five apiece to send the game to overtime before Straky won it for Team USA.

Kaidan Mbereko (Aspen, Colo.) earned the win in net, turning away of 21 shots 26 he faced.

The U17s are back in action Wednesday as they take on Muskegon at 7 p.m. at LC.Walker Arena in Muskegon, Mich. For the latest news on USA Hockey's National Team Development Program, visit USAHockeyNTDP.com or follow the team on social media @USAHockeyNTDP.