Two sides will square off in rematch tomorrow afternoon 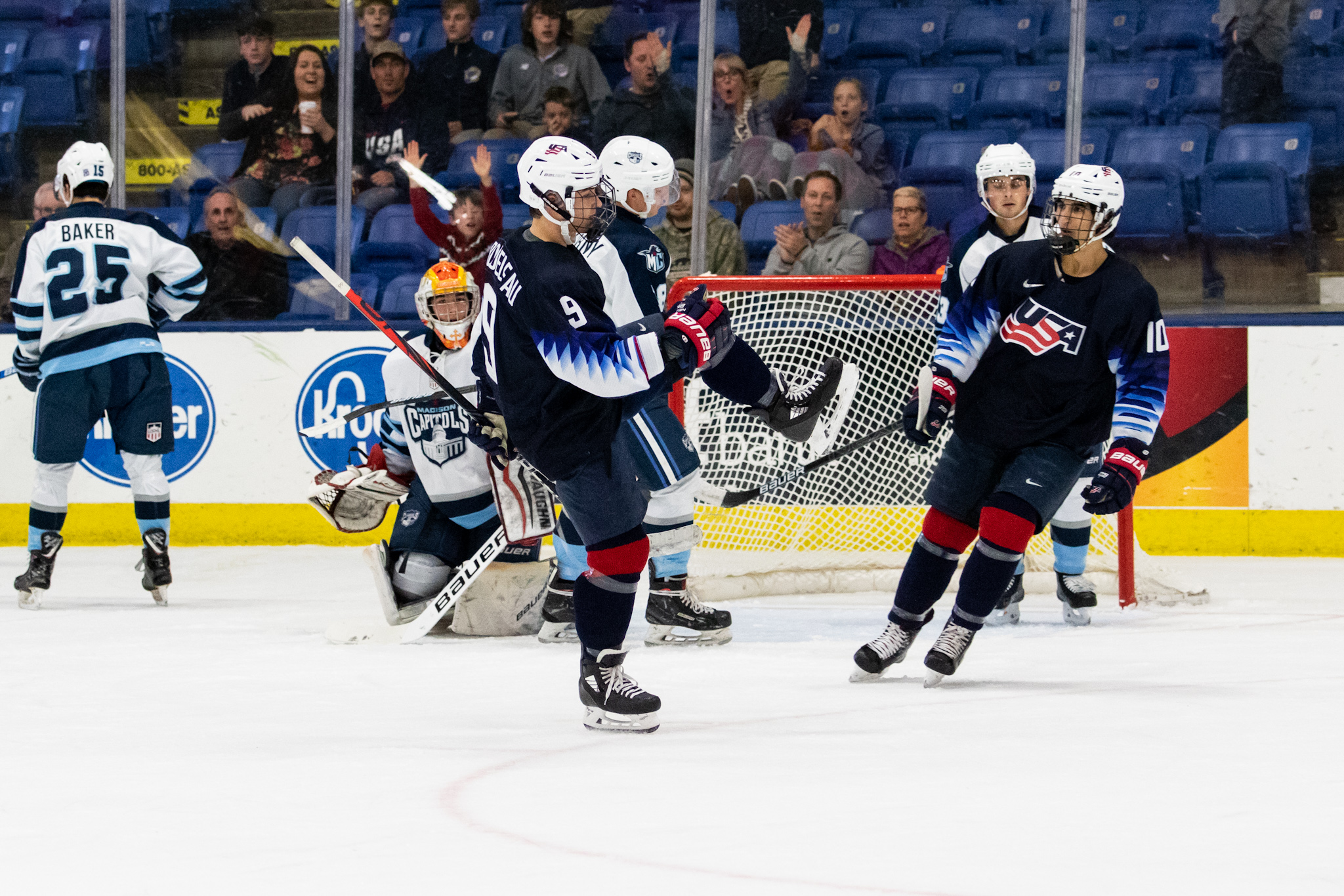 The U.S. National Under-18 Team scored early and often Saturday night, building a 4-0 lead after the first period en route to a 6-1 victory over the Madison Capitals at USA Hockey Arena.

Luke Tuch (Baldwinsville, N.Y.), opened the scoring for the U18s at 8:17 when he gathered an errant shot off the backboards from Sanderson and snuck it past Madison's Simon Latkoczy for his fifth mark of the season. Eamon Powell (Marcellus, N.Y.) collected the secondary assist on the goal.

Just over two minutes later, Bordeleau capped off a U18 power play with a beautiful individual effort to extend the lead. The University of Michigan commit collected the puck at the left-hash and toe-dragged a Madison defender before finishing with a wrist-shot for his team-leading sixth goal of the year.

Brett Berard (East Greenwich, R.I.) and Smilanic both added goals before the end of the frame to extend the U18s lead to 4-0 after 20 minutes.

Berard took a pass from Dylan Peterson (Roseville, Calif.) on a 3-on-2 rush and fired a wrister to make it a 3-0 contest at 14:30 of the opening period. Smilanic added another when he flipped home a shot from just outside the goal crease.

Forward Tanner Latsch (Muskegon, Mich.) added his third score of the season just under five minutes into the second period. Hunter McKown (San Jose, Calif.) stole the puck behind the Madison cage and found Latsch at the left faceoff circle for the shot.

Zakary Karpa (Newport Beach, Calif.) capped off the U18s scoring with his first goal in an NTDP uniform. Daniyal Dzhaniyev (Brooklyn, N.Y.) picked up the lone assist on the score.

Noah Grannan (Germantown, Wis.) earned the win for the U18s, stopping 16 of the 17 shots he faced.

Team USA finished the game with a decisive 35-17 shot advantage.

The two sides square off again tomorrow afternoon with a 4:00 p.m. puck drop at USA Hockey Arena. The game is the NTDP's annual sensory-friendly game, with limited lights and videos around the arena. For tickets to tomorrow's game, or any future NTDP home game, visit USAHockeyNTDP.com/tix. For the latest news on Team USA, follow the team on all social media @USAHockeyNTDP.