Dzhaniyev's speed and strength have improved through summer training 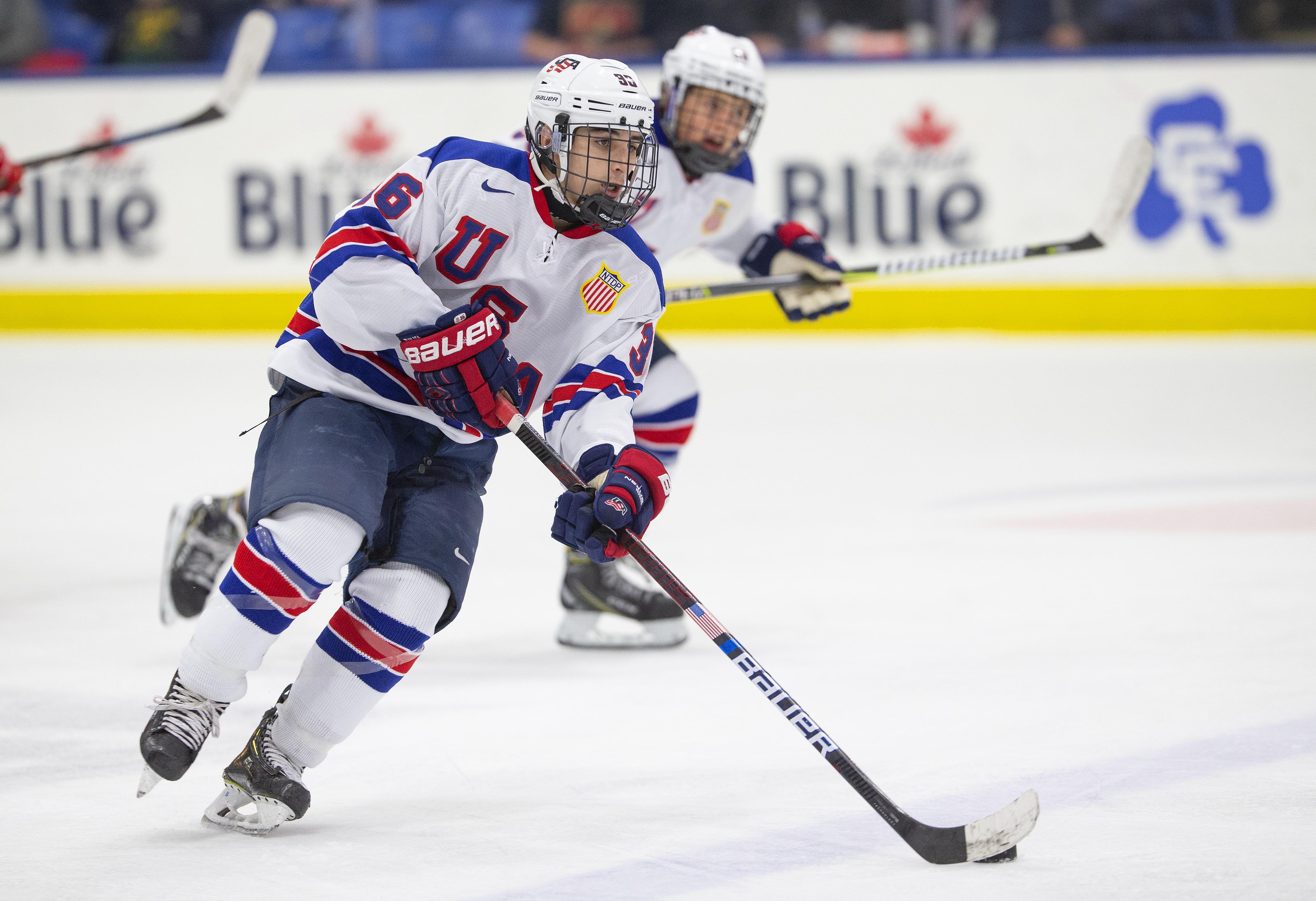 A trip to a New York Rangers game at Madison Square Garden was all it took for Daniyal Dzhaniyev to fall in love with the game of hockey, even though he wasn’t old enough to even skate.

“I started playing hockey when I was four years old after my dad took me to see a Rangers game when I was two,” he said. “Ever since that game, I fell in love with the sport and just wanted to play all the time.”

Dzhaniyev, who grew up in Brooklyn, New York, was the first member of his family to lace up the skates, so he is setting his own path in the sport.

“I’m the first one in my family to play hockey. It’s just such a fun sport to play,” he said. “It gets me out of the house and the rink is my second home.

Originally, he didn’t know too much about USA Hockey’s National Team Development Program. But once he heard about it, he knew it was his goal to make it to Plymouth, Michigan.

“I found out about the NTDP roughly three years ago,” he said. “My dad and I dreamt about me playing here. I’m just so thankful it worked out."

One of his highlights from last summer was earning a late call to join the NTDP. He couldn’t turn down the opportunity to wear a USA jersey.

“It was incredible to get that call,” he said. “I was just finishing up in Buffalo for Nationals. Right after the last game, I got a call from Coach [Seth] Appert asking me if I wanted to join the team and of course, I said yes. I was ecstatic.

“It means everything to wear the USA jersey. Not a lot of people get the opportunity to represent their country. It’s a huge honor."

Of course, it wasn’t easy for Dzhaniyev to leave his home in Brooklyn and move to a new environment. It was his teammates that really helped him feel at home in hockey. 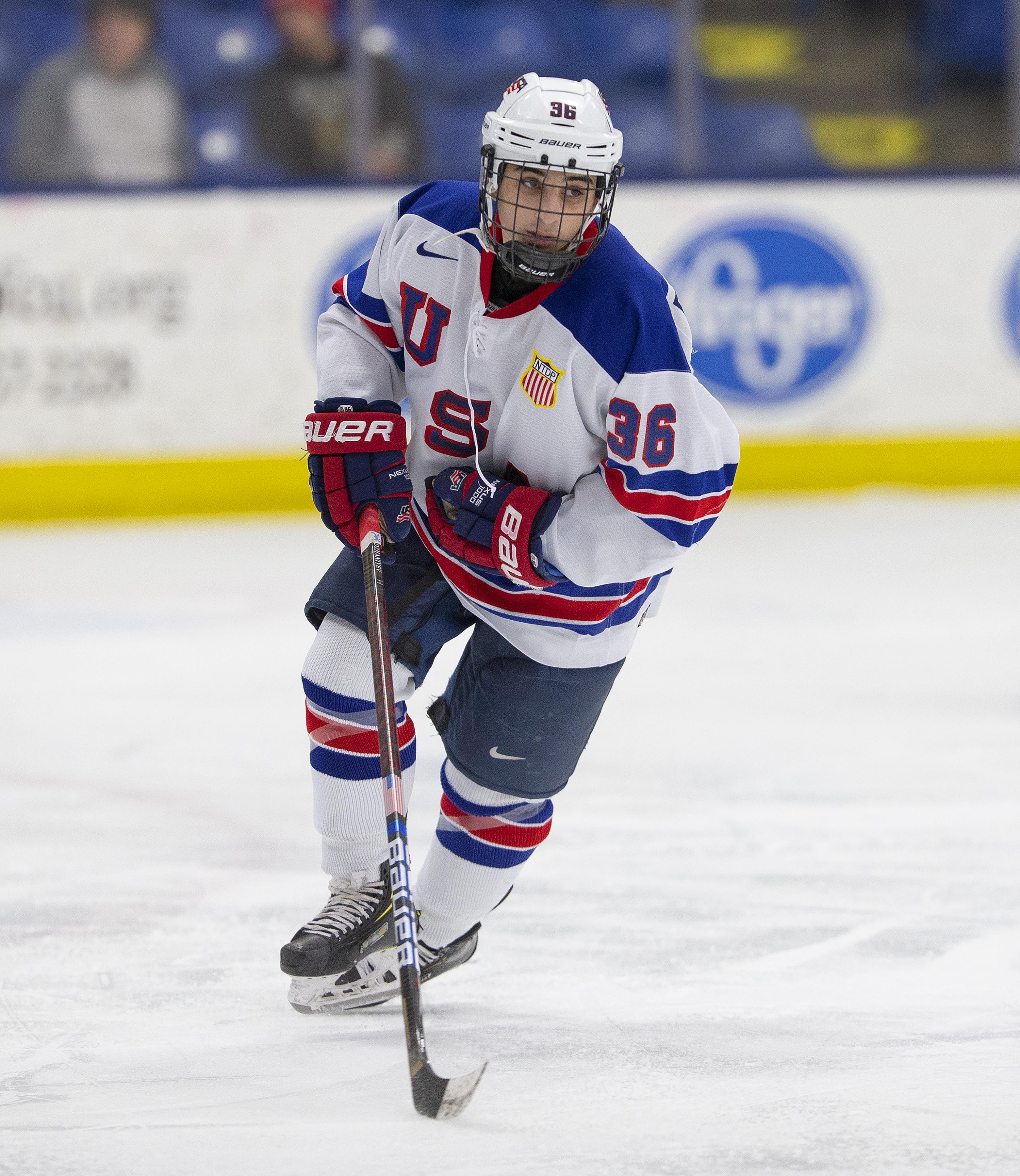 “It had its tough moments at first. It was a quick transition overall, though. The whole team was very welcoming right from the start and it just became easier and easier,” he explained

He learned plenty about himself this season but there is one important lesson that sticks out to him.

“Competing is a big one,” said Dzhaniyev, who tallied eight goals and 11 points in 54 games. “Prior to this year, it was pretty easy for me to score, regularly. Now, you get to the higher levels and it becomes harder. That is the biggest thing.”

One area that Dzhaniyev, who is 5-foot-4 and 125 pounds, had to work on was learning how to use his body when he was on the ice

“It wasn’t that hard at first,” he said. “I put it in my head that it doesn’t matter how big the opponent is, I have to play my own game. I can’t be physical [in the corners] but I need to go into the corners, battle out and get the puck.”

It took almost half of the season but Dzhaniyev can point to a turning point where everything just started to click for him.

“After the Four Nations Tournament in December, it slowly started to get better as the year went on. By the end of the year, I felt much more comfortable out there.”

After the Under-17s were knocked out of the USHL playoffs, Dzhaniyev and his teammates kept busy preparing and training for next year. He understands how this training will benefit him in the long run.

“My speed has improved and I’m getting stronger,” he said. “I’m able to battle for the puck for much longer. I’ve gotten stronger and faster and I think it will show on the ice next year."

Dzhaniyev plans to take all the lessons he has learned this past year and apply it to the summer. He knows how important it is going to be to help prepare him for his final season with the NTDP.

“I’m going to train a lot this summer,” he said. “First, I’m going back to Azerbaijan to see my family. After that, it’s game on. I want to train as hard as I can to get ready for next season.”

One of his biggest hockey moments was when he committed to Penn State University to continue his hockey career. It was another dream that he had worked through over the years.

“I love the coaching staff and the facilities are unbelievable,” Dzhaniyev said. “I went there for a visit and it just blew me away. Ever since then, I have wanted to go there. I committed in July of 2018.”

For Dzhaniyev, each year playing hockey brings out additional enthusiasm and passion for the sport that he loves so much.