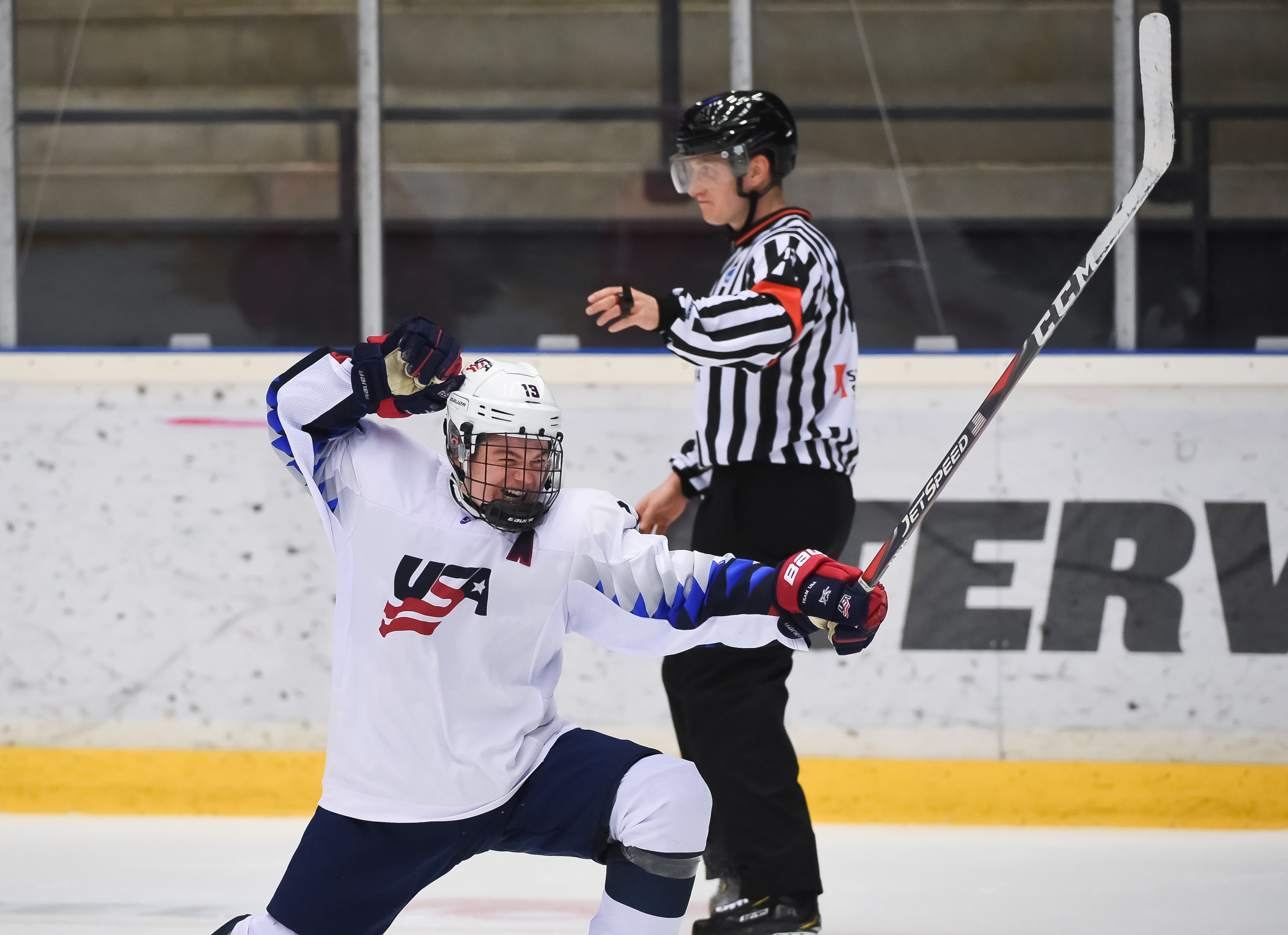 Photo courtesy of Images on Ice

One thing is for certain for USA Hockey National Team Development Program forward Cole Caufield. At 5-foot-7 and 162-pounds, size really doesn’t matter when he is on the ice.

After all, he set the NTDP record for career goals, tallying 126 over the course of his two seasons with the program. He bested the previous mark of 104, which was set by Phil Kessel (2003-05). Outsiders may have doubted Caufield’s ability based on his size, but he never did.

“Don’t doubt yourself. Believe in yourself,” Caufield said. “You have to have work ethic.

“There are so many guys that you can look up to. The game is changing and you have to have speed and skill to play the game.”

All Caufield has done since arriving in Plymouth is score goals. He shattered the single-season goals record with 72, eclipsing the previous mark of 55 which was set by Auston Matthews in 2014-15.

“[Records were] never on my mind until last year when I came close to setting the single-season goals record,” said Caufield, who tallied 54 goals in 2017-18. “I set a goal to try and break it this year, but I really wanted to improve my overall game.

“Honestly, it was about my teammates who enabled me to break the mark. I've been really lucky to be able to play with some great players who could help me. They'd pass me the puck and I could score. I definitely passed some great names on the list.”

In addition to his teammates, there are two other people that Caufield credits for his success — his dad Paul and his older brother Brock, a winger for the Wisconsin Badgers.

“My dad was the ice arena manager so I was able to go in and work on my skating and my shot,” he said. “We worked on a lot, whether it was my shot or doing wrist curls with my brother. It really helped me get strong hands. It was all about repetition. I really have to credit a lot of my success to them. I wouldn’t be here without them.”

Over the past two seasons, there were some older brother vs. younger brother battles for Cole and Brock, with Cole collecting a perfect 5-0 mark. The final game was on Jan. 12 when the U18s beat the University of Wisconsin, 6-2, in Madison. It may be something that Cole will not allow his older brother to forget.

“I think what I will remember most about that game is taking the opening face-off against each other,” he said. “That's something I will always remember. Since we won the game, I don’t think I'll be able to let him forget that.

“Honestly, I can’t go without crediting my success to him. He always pushed me to be better. I looked up to him and was able to work with him. He helped drive me to get better every day.”

The good news is that the two brothers will be reunited at the University of Wisconsin next year.

“I’m excited to play on the same team with him next year,” said Caufield, who grew up in Stevens Point, Wisconsin. “It'll be great to play in my home state and play in front of my family and friends.”

Caufield wrapped up his career by leaving his name permanently etched in the record books at the International Ice Hockey Federation Under-18 World Championship. He was named the tournament MVP after tying Alexander Ovechkin's single-record tournament record with 14 goals from 2002.

“It’s pretty cool just to be mentioned in the same category as him,” said Caufield. “It was the team; I couldn’t have done it without them. I thought we played well throughout the tournament. Without them, there is no way I would have broken the record.” 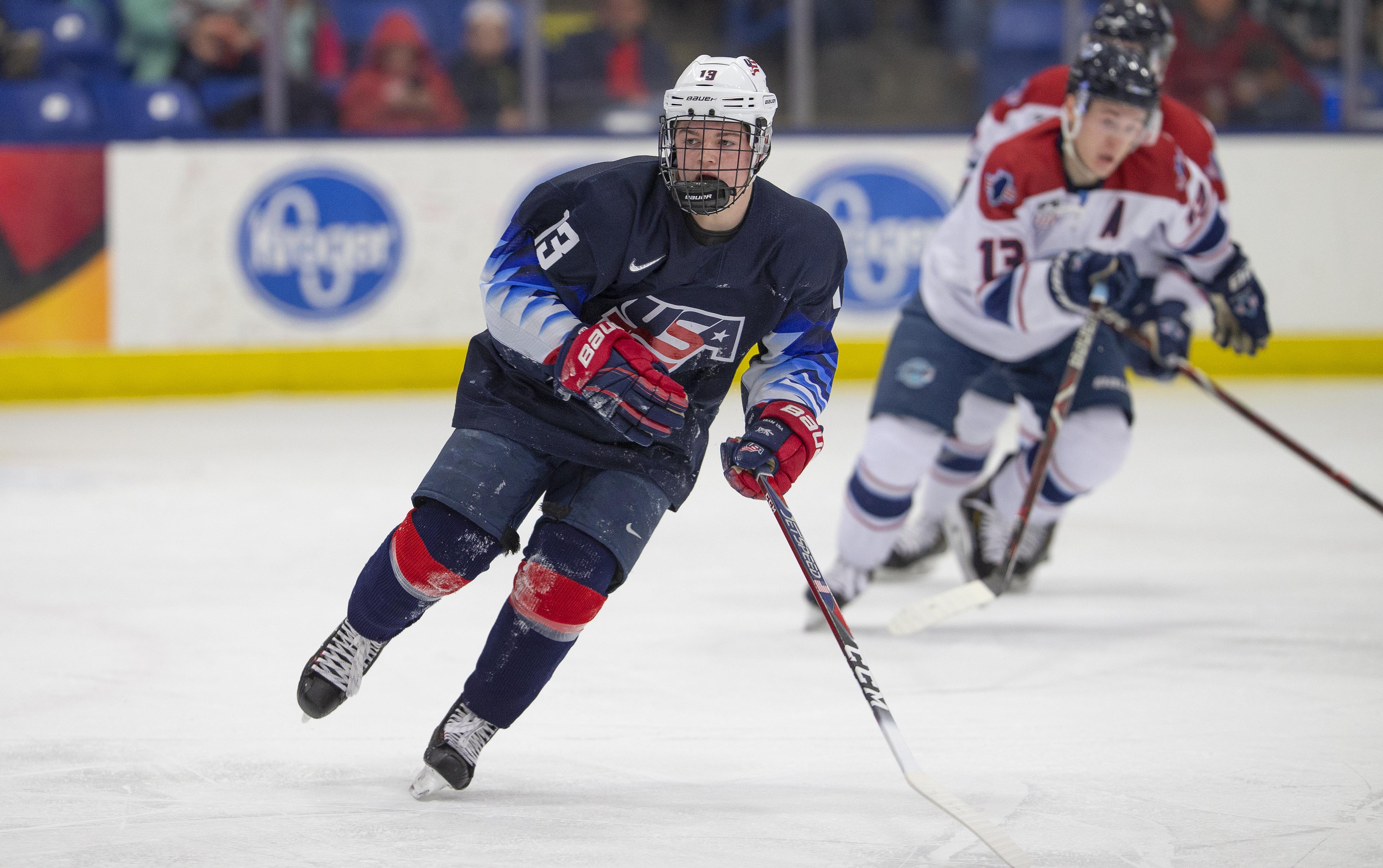 Caufield and his U18 teammates wrapped up their NTDP careers, earning a bronze medal at the U18 World Championships as the squad beat Canada, 5-2. For Caulfield, it marked the second straight year that he medaled in the event, after winning a silver last year as an underage player.

“To be able to earn a medal in back-to-back years, it was amazing,” he said. “Last year, we made it to the gold medal game and lost to Finland in a heartbreaker. This year, we lost in the semifinals but we still had another game left. We knew that we had to win it for our country. We wanted to show our pride and return home with a medal. It was great to go out with a win.

“I will never forget the closeness of this team. We had the best bond. When you saw us together, you knew that we loved to be with each other. We had a really great group."

He had a slew of emotions after he took off his USA jersey for the last time as a member of the NTDP.

“It hit me hard last year that this was going to be my last time wearing the jersey,” said Caufield. “Last year, watching the U18s waiting to take off their jersey after the game, it just seemed like the guys didn’t want to take it off. The last two years have flown by and I hope I get another chance to wear the jersey. It’s such a special feeling and honor to wear the colors of your country.”