As NHL Draft approaches, NTDP star is focused on winning a world title 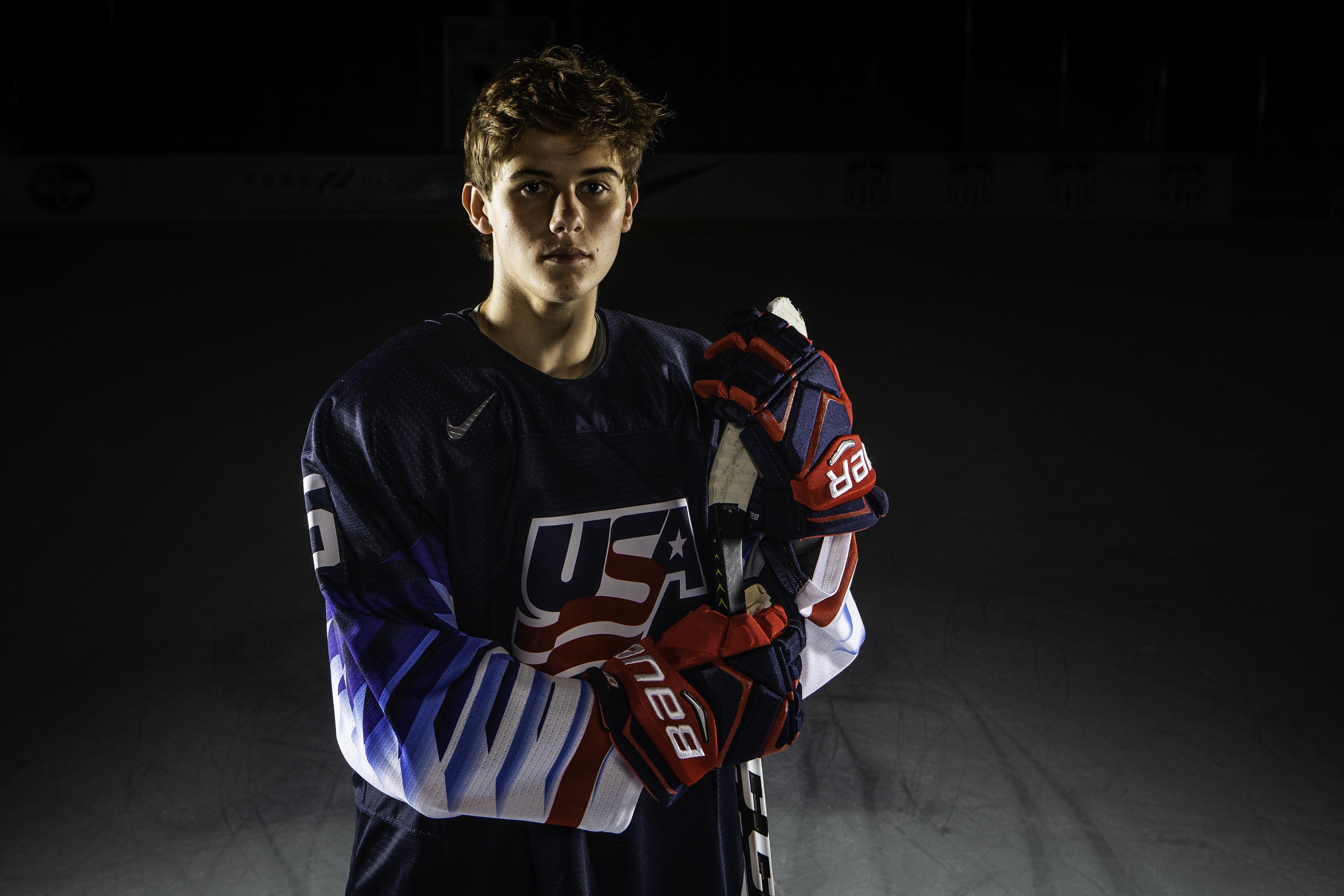 Since arriving to play for USA Hockey’s National Team Development Program in August of 2017, Jack Hughes has consistently been under the microscope. Whether it is doing media interviews, representing Team USA in international play or having NHL scouts flock to see him, he’s used to being in the spotlight.

Despite all the attention and pressure of being by most estimates a top draft pick in the 2019 NHL Entry Draft, the 17-year old has maintained a level-headed approach to his game. Some advice from his dad Jim has helped.

“It’s really not too hard if you think about it,” explained Hughes. “I have no money in the bank yet still. I haven’t really done much. I think my dad’s big message was to keep my feet on the ground and not get too far ahead of myself. I need to come to the rink every day, work hard, and have fun and enjoy my time with the boys since I won’t be with them forever. This experience is going to be with me forever.”

This advice has really translated into his game. He broke the NTDP career-scoring record on March 22 when he recorded his 190th career point, besting the previous mark of 189, which was set by Clayton Keller (2017-19). As of April 19, Hughes currently has 209 career points.

“It’s special [to hold the record],” said Hughes. “Coming into the NTDP, the [Under-17] year is really tough. All I really wanted was to have success. I wasn’t worried about the records or putting up crazy points... Coming in this year, I knew I was really close and that was something that I wanted to get. Getting it that early is really nice, now I have a chance to set the record and hopefully, no one will touch it for a long time.”

In addition, the 5-foot-11, 170-pound forward serves as the team captain for the Under-18 team. It is something that means the world to him.

“It’s a huge honor obviously,” said Hughes. “To be respected by your group is really cool. It’s kind of something that you want to be good at. We have a lot of really good leaders on our team and we are all the same age. We do not have any veterans on our team and we help each other out. I have a really good supporting cast alongside me.”

It is probably one of the huge reasons why this team has had so much success on the ice.

“During our two years at the NTDP, a lot of teams really form a bond,” said Hughes. “A lot of people say ours is really good. Obviously, we have a really good team on the ice; we have talented players. In the locker room, we have a lot of great people. We are good friends, both on and off the ice.”

Sport away from the rink
Basketball

Hughes is in a familiar position at the 2018 International Ice Hockey Federation Under-18 Men's World Championship in Sweden. After all, he was one of five underage players on Team USA last year that won a silver medal. He understands how he can take that experience and apply it to this year.

“We have a different team, coaching staff and characters in the locker room,” explained Hughes. “One of the lessons from last year is that we lost two games in the round-robin. We can’t get too high or get too low. We have to stay even keel over there — we are there for three weeks. It’s a long time. We need to be a family — just the boys and the coaching staff."

“The five of us who were there last year can spread to the group that it’s a long tournament and we need to keep going and keep chugging along.”

Hughes, who recorded 12 points (five goals, seven assists) in seven games, was named the Most Valuable Player at the 2018 IIHF Under-18 Men's World Championship, along with earning Best Forward honors. The honors do not stick out to him; rather, it was several games that he will always remember.

“The gold-medal game is the game that you want back [a 2-1 loss to Finland],” said Hughes. “I had a great tournament. It was a lot of fun, being with those guys in Russia. We lost our first game against Canada. We bounced back and won our second game and then, lost our third game to Sweden."

They taught the three of us almost everything we know. They created the people we are too. You can't really put into words what they have done for us. Now that I'm older, I realize what a really good support system they have been for me.

“I think that the biggest game for us in that tournament was beating Russia in the quarterfinals. It was a 1-1 game with six minutes left and we ended up winning 5-1. That was obviously a really special game, beating Russia in Russia and kind of silencing the crowd. If we wanted a game back, it would definitely be the Finland game. It was so close the whole game.”

Wearing the USA jersey will always be special for Hughes. It’s becoming something of a family tradition for the Hughes boys, with older brother Quinn wearing the stars and stripes from 2015-17 and youngest brother Luke joining the NTDP in the fall.

“It’s really special and it’s a privilege,” said Hughes. “You look at all the people who have built this program, and they are some really special people. You come to the rink every day and put the jersey on and think about names such as [Patrick] Kane, [Auston] Matthews and [Jack] Eichel. There have been so many great players to have come through this team" 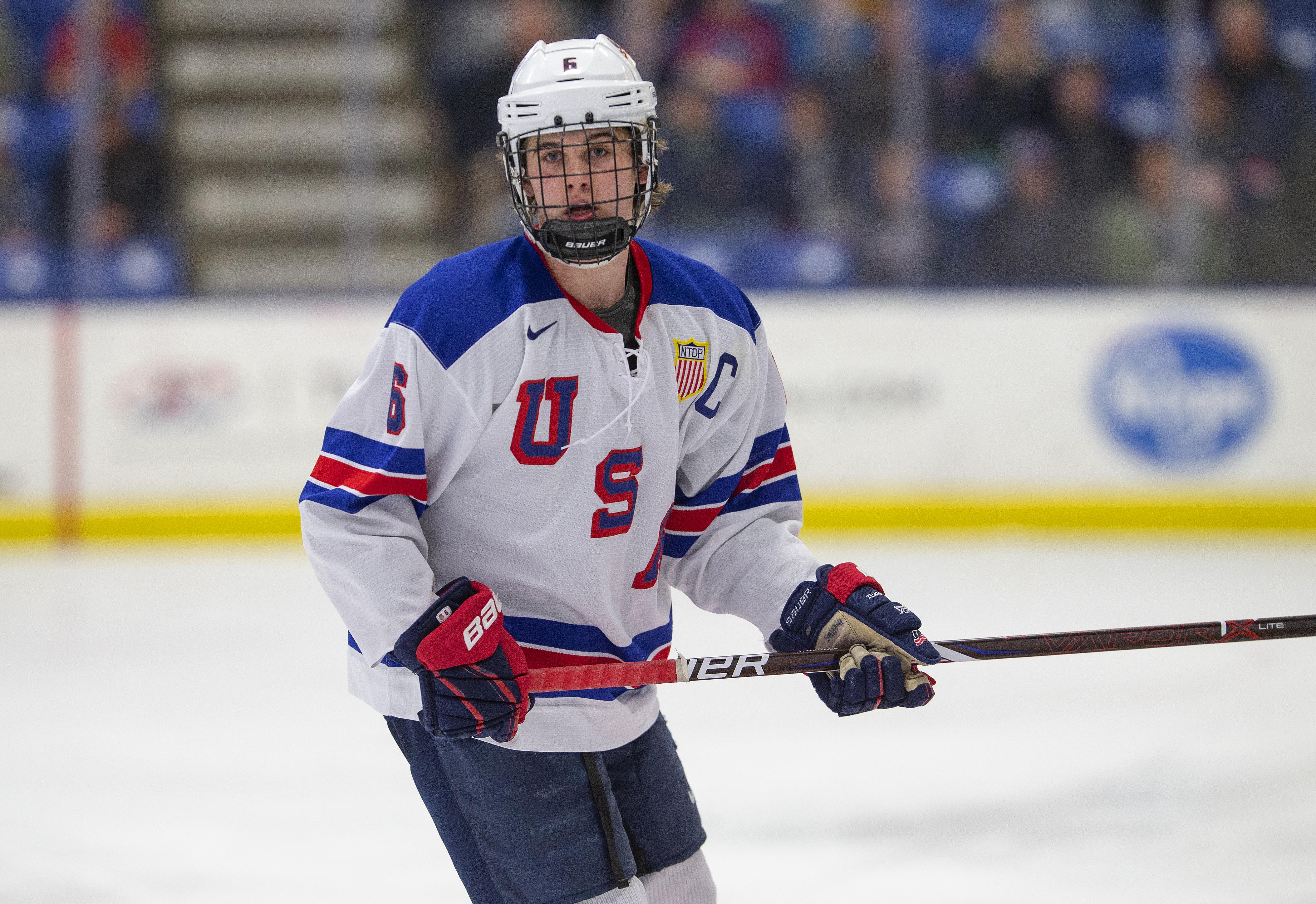 “One of the first movies you watch as an American hockey kid is [“Miracle”]. This is the chance to play for the U.S. every day. It’s really special and it’s something that we kind of take for granted. It’s something that we all grew up dreaming about and now we are doing it. It is so much fun.”

He also had an opportunity to play with Quinn for Team USA at the World Junior Championships back in December.

“We played one game together in Quinn’s minor-midget year before he came to the NTDP,” Hughes said. “To play at the World Juniors together was something we grew up wanting to do. It was a really special time for us. I know my family really enjoyed it, including my aunts, uncles, and cousins.”

At the end of the day, he knows how important his support system back home in Orlando, Florida, is to him with his dad and mom (Ellen) and of course, his brothers. His parents have had a huge influence on his growth and development.

“They have been everything,” he explained. “They taught the three of us almost everything we know. They created the people we are too. You can’t really put into words what they have done for us."

“Now, that I’m older, I realize what a really good support system they have been for me. They have been people I can lean on. Growing up, everything was them teaching me and running around for us. They had to sacrifice for us, but now that we are older, I think it’s really fun for them to see some really cool things that we have been dreaming about since we were young kids. I know they have enjoyed it and hopefully, we can continue to do that for them.”

Even with the spotlight shining, Hughes understands the importance of being grounded and playing his game.